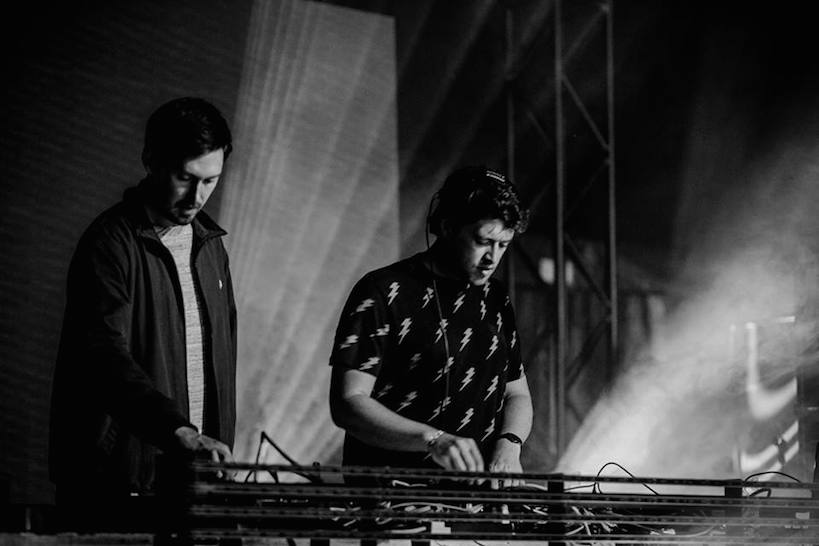 Though London-based tech-house duo Dusky might have been overshadowed by like-minded peers Disclosure and the new album they’ve been teasing, the dance floor and Beatport chart powerhouses have also been working on the follow-up to their 2012 debut LP, Stick By This. In the meantime, they’ve put out scorched-earth stomper “Jilted,” the first listen off their stopgap EP, Ordinary World.

Now, they’ve released “Skin Deep,” a slightly more emotional jam that’ll have you singing, “You make me wanna ooh-ooh-OOH” while getting your groove on. Take a listen below (just in time for your Friday night rave) and then read SPIN’s Q&A with college chums Nick Harriman and Alfie Granger-Howell, who share production duties.

How did you two meet and become friends and musical partners? I know you started with a different project, Solarity; how did that evolve into Dusky?
Nick Harriman: We met when we were about 16 at sixth form college in Camden, London. We quickly became friends — us and a few other mates bonded over a love of music and raving. Both of us had already been getting to grips with music production by that time on our own, so it made sense to try and make some music together. Back then, we were making drum & bass, hip-hop, breakbeat and garage.

We both went on to study music, and several years down the line we started making tracks as Solarity. A few years after that we were working on an album, most of which was so different to the music that had come before that we felt it warranted a new name. After a lot of time searching for a name that felt right, Dusky was born.

There are so many legends in the house/techno scene that have been doing this for decades. When you first started, did you feel like you had a lot of homework to do before you were taken seriously as DJs?
Alfie Granger-Howell: Of course. We were lucky enough to start DJing very young, and like a lot of other DJs we spent an almost unhealthy amount of our teenage years in our bedrooms practicing DJing, buying and listening to records in record shops, and DJing at house parties, so luckily by the time it came to us seeking out proper paid DJ gigs we’d put in the hours. That said, it was definitely hugely intimidating when we started sharing line-ups with some of our DJ heroes!

Paul Woolford interviewed you for Dummy in 2013, about a year after Pete Tong threw his support behind your 2012 album Stick By This. Who are some of your other idols in the UK’s dance music scene?
NH: There are so many. MJ Cole, Zed Bias, Underworld, Orbital, the Chemical Brothers, Photek, LTJ Bukem, Bad Company… We could probably list our idols for days.

You’ve spoken about how internet listening culture has homogenized, rather than broadened, people’s taste in music — with your own imprint, 17 Steps, do you try to sign artists who challenge listeners?
AGH: Yes, that’s definitely one of the things we focus on with regards to the label. It’s important that we feel the music is interesting from an aesthetic point of view, and often that overlaps with a sense of wanting to subtly challenge an audience.

Ordinary World seems to get harder and harder as it progresses from “Skin Deep” to “Jilted.” Is that how you decided the track list?
NH: I guess it does, though I haven’t really thought about it that way before. We knew we wanted “Skin Deep” as the A-side but were never sure about where the others should go. They’re designed to be listened to on their own, as well as part of the EP, so they’re pretty interchangeable.

A lot of venues in London seem to be struggling to deal with and stay open under the government’s dance music regulations. Has that affected your career at all?
AGH: It’s never affected us to be honest. I think the main issue for London venues are the crazy rents and pressures from landlords to redevelop buildings which has seen quite a few iconic venues shut down in recent years. It’s a shame to see them go but new ones always sprout up, so it’s not all bad.

Tell me about your work process in the studio, especially for the Ordinary World EP.
NH: It varies from track to track. We often start ideas on our laptops while on the go, and then pass it to the other to take a look at once we’re back in the studio. We tested out early versions of all of these EP tracks and then went back in the studio to tweak the mixdowns and arrangements. Some of them underwent different permutations and took longer to create, though others didn’t take too long to get right.

What are some of your favorite venues to perform in; which audiences have been most receptive to you; and which shows are some of your career highlights?
AGH: Some of my favorites are Space and DC10 in Ibiza, Fabric in London, Warung in Brazil. We find the Irish and Scottish crowds to be the most receptive in terms of crowd reaction though. Getting to play the closing set in the Temple in Glastonbury was a great highlight of last year, we first went to the festival many years ago so it’s been an honour coming back and playing there.