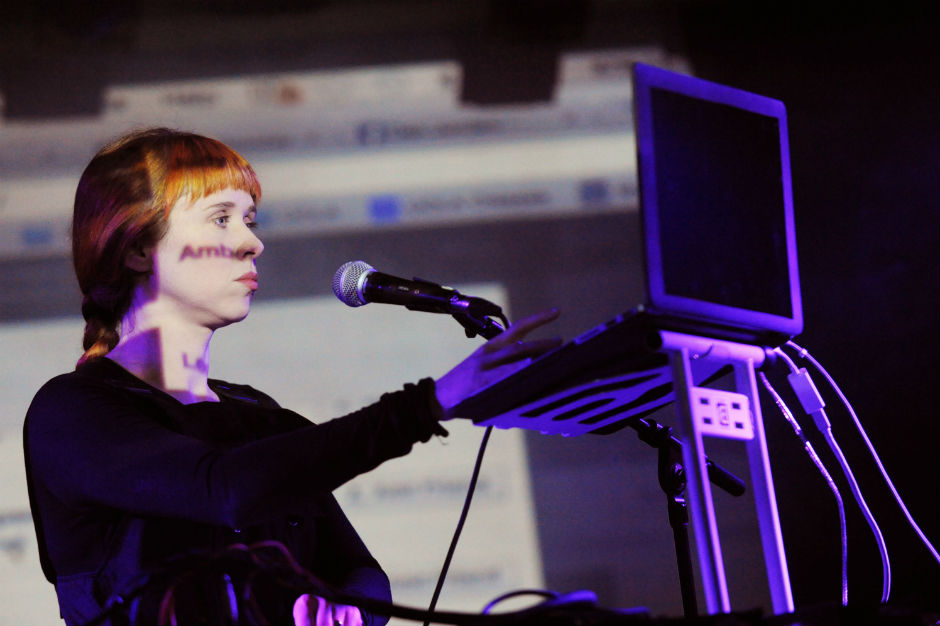 The twitchy, cyborg kineticisms that Holly Herndon has dripped out over the last few years can project something of a desolate exterior. Like a foreboding (i)Cloud hanging over the world of experimental composition, the San Francisco-based technophile/producer/academic emerged in proper with 2012’s Movement, a fragmentary exploration of the connections between woman and machine. Its skittering, inhuman dance beats have ancestors in the mechanized dystopias of Autechre and their contemporaries, but there’s also a brighter undercurrent that separates that record from such predecessors. Her reliance on the human voice and her laptop as her primary and sole instruments (as well as her choice to construct an entire track out of the sound of her breath) suggests a surprising optimism about the role of the human being in a digital age.

But her second full-length, Platform, muddles Herndon’s aesthetic disharmony even further. From the opening strains of “Interference” — which leads off the album with its most alien composition — it’s clear that Herndon has excised her more unapologetically experimental inclinations. Its vocal samples sputter to life like the gasps and wheezes of a dial-up Internet connection, but soon they stumble into a dreamy patchwork above a gleefully footworking kick drum. It’s a move that she repeats throughout Platform (one that was first suggested on Movement’s vast, ascendant club track “Fade”), teasing disconnect and discord before settling into jittery takes on dance music that feel familiar even when they’re unnerving.

There are more obvious overtures to pop music, like the soaring chatter of “Chorus” and the buoyant tech-hymn “Morning Sun.” But more often the songs take on this mutated form, as if some skittering club tracks had been left to deteriorate on forgotten hard drives for years and Platform was an act of digital excavation. So when the uplift peeks through on Platform, it’s more complicated. Herndon’s avant impulses butt up against the record’s catchiest moments, as on “An Exit,” an alternately joyful and eviscerating collaboration with the similarly tech-obsessed producer Amnesia Scanner. Disembodied and disemboweled vocals collide and shudder in the face of grotesque, plasticine beats that materialize, intimidate, and dissipate to make way for Herndon’s rapturous chorus.

Talking about the construction of Platform, Herndon put forth the idea that we need music that can resonate with the specific emotional situations of the modern age. Why use a sea of violins, she argues, to evoke “the feeling [she has] after a Skype breakup?” It’s through this lens that Platform finds its biggest successes. It’s structurally confounding, simultaneously weirder and more welcoming than any of the other material she’s released to date. Somber and hopeful, bleak and bountiful, it’s an appropriately uneasy document of all the terrible and breathtaking possibilities of a not-so-distant techno-future.