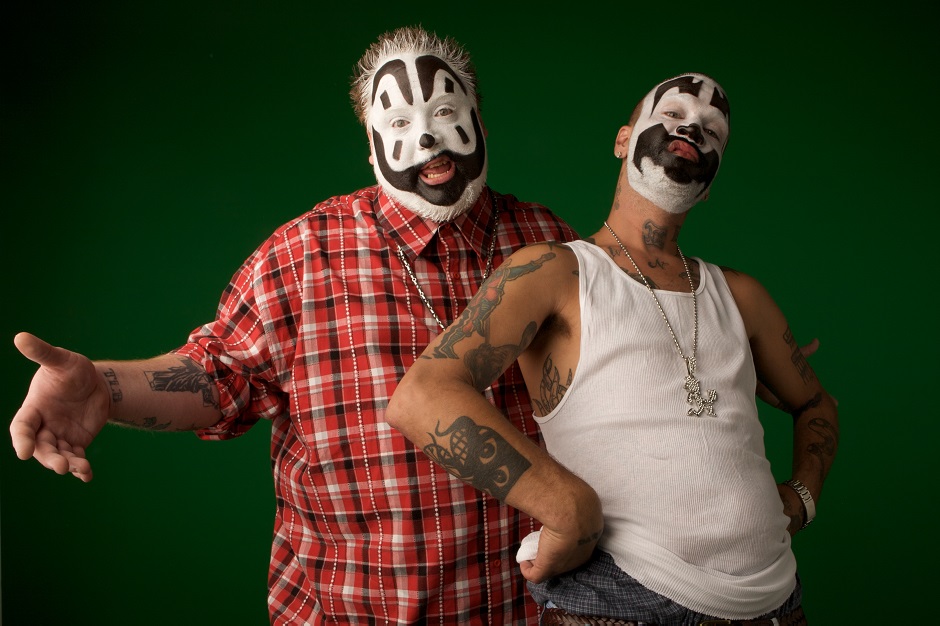 Everyone has an opinion on Detroit horrorcore lifers Insane Clown Posse, but no one can dispute that 1) they have one of the most loyal fan bases in the universe, so much that they commandeer their own festival, hell, their own subculture — move over, KISS Army, the Juggalos are wanted by the FBI — and 2) they love their fans to Faygo-spattered pieces. So much, in fact, that tomorrow, on Violent J’s 43rd birthday, the duo releases their first album in three years, The Marvelous Missing Link: LOST, which complements a second release, naturally entitled FOUND, to be released on July 28th, during this summer’s Gathering of the Juggalos. (If you follow the group’s “Dark Carnival” mythology, this is the first part of the third card in the second deck of Joker’s Cards.) It’s one of the most serious releases they’ve ever put out — Violent J told Billboard there’s “no comedy on it,” all saved for FOUND, which is “about the good times.”

The group themselves explain, “This new album is unquestionably the most direct and in-your-face Joker’s Card we’ve ever released. The Marvelous Missing Link: LOST challenges the listener to consider the importance of faith in their life and how they are truly Lost without it. This record dares you to think about the big issues in your life … while at the same time delivering the ruthless Detroit wicked shit that the world has come to expect – and fear — from the Insane Clown Posse. Mad clown love to our Juggalo family all over the world!”

Indeed, songs like “Falling Apart” sound more like Linkin Park at their most self-effacing than any kind of blood-and-gore circus rap. It may still surprise outside how Shaggy 2 Dope and Violent J rap about faith in a higher power to defeat evil on a track like six-minute-plus album closer “I See the Devil,” but it won’t be jarring to longtime fans familiar with the group’s born-again about-face The Wraith: Shangri-La. Regardless, ICP are born entertainers and the first single “Vomit,” indeed delivers the grotesque goods.