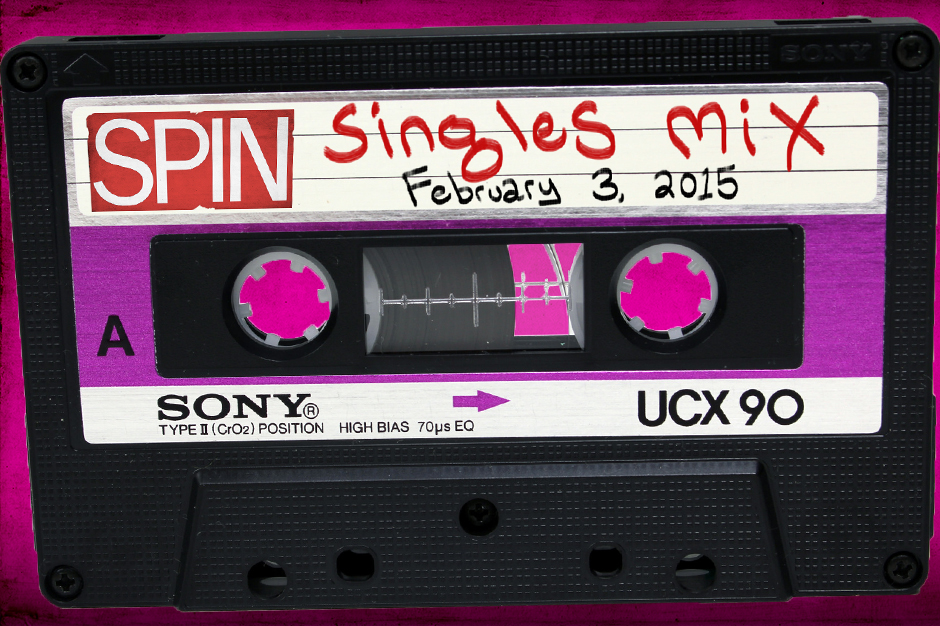 Welcome to SPIN’s Singles Mix! The SPIN staff has rounded up their favorite, must-hear tracks for your mid-week playlists. From glittering girl bands to resurrected hip-hop duos to Israeli electro-pop trios, these are the songs you need to know right now.

American Wrestlers, “Kelly” (Fat Possum Records)
Phoenix’s vocal friendliness and melodic warmth, mixed with Kurt Vile’s lo-fi haziness and lead-guitar righteousness — yeah, that’s something we’d be interested in. American Wrestlers — solo artist, despite the implied plurality — recorded his debut album on “a TASCAM 8-track and the cheapest pawn shop instruments [he] could afford” and it shows: “Kelly” is almost overbearing in its sonic crappiness, but the guitar and piano hooks are so perky and the personality is so amiable (“I’m not afraid of no rock and roll!”) that it ends up being even more endearing for its 64kbps-ness. One of the most winning pop/rock songs of the early year. ANDREW UNTERBERGER

ANAMAI, “Lucia” (Buzz Records)
“Can’t you love me some other way?” pleads Anna Mayberry over the ominous booms and splashes of “Lucia,” a watery, drumless track centered only by her fraught harmonies and heart-ripped lyrics. For the degree of unsettling electronic folk that she and David Psutka capture as ANAMAI, think the Haxan Cloak producing Wye Oak. DAN WEISS

Beach Slang, “Too Late to Die Young” (Lame-O Records)
If the release of Beach Slang’s two 2014 EPs have you eagerly awaiting a full-length from these Philadelphia punks, then this one-off should be a welcome diversion. Released as a part of the Strength in Weakness compilation to benefit cerebral-palsy research, “Too Late to Die Young” benefits from a sparse arrangement of acoustic guitar and James Snyder’s harsh whisper, asserting, “We’re animals, we’re drunk and alive / I swear, right now I’m alright.” Living in the moment — instead of getting hung up on the existential plane — is all they can do. CONNOR O’BRIEN

Courtney Barnett, “Pedestrian at Best” (Mom + Pop)
The queen of circuitously charming lyrics has returned, and she’s been doing a good bit of over-thinking since 2013’s stellar A Sea of Split Peas. Replete with cutting guitars and a healthy portion self-doubt, “Pedestrian at Best” emotes self-consciousness and anger, a lot of which seems to exist within Barnett’s own head. She punctuates long streams of contradiction with the only sure statements she can make in the chorus: “Put me on a pedestal and I’ll only disappoint you / Tell me I’m exceptional and I promise to exploit you.” Not quite the sentiment one expects to hear when there’s a new album to promote (Sometimes I Sit And Think, and Sometimes I Just Sit, out March 24), but if Barnett’s prior melancholic tendancies (“Avant Gardener,” “History Eraser”) prove anything, it’s that she must be doing something right. C.O.B.

El Perro Del Mar, “An Eye For Gold” (The Control Group)
Swede-pop chanteuse El Perro Del Mar sidesteps her usual heartache (“God Knows (You Gotta Give to Get),” “This Loneliness”) for a few minutes on this spare, previously unreleased demo, which is slated to show up on the forthcoming deluxe edition of the singer’s self-titled debut album. Leading with jazzy piano chords and gentle guitar strums — which take on a live effect by quieting down and growing louder at pivotal points — “An Eye For Gold” showcases Sarah Assbring’s famously breathy vocals in such a way that makes you long for the mid-century days of Jane Birkin and Phil Spector… Or, in this case, 2005. RACHEL BRODSKY

Fifth Harmony, “Going Nowhere” (Epic Records)
One listen to the tightly wound chords on “Going Nowhere,” the latest cut from Fifth Harmony’s just-released Reflection, and you’d think the X Factor alumnae ran up and down the Big piano and Auto-Tuned the notes. Written by Andre Merritt (a.k.a. the same guy who brought us Rihanna’s “Disturbia” and Chris Brown’s “Forever”), “Going Nowhere” repurposes DJ Mustard deflated synths and mixes in some power-pop clapping and up-and-down harmonizing the likes of which pop fans haven’t gotten since the heyday of Girls Aloud. BRENNAN CARLEY

Garden City Movement, “My Only Love” (BLDG5 Records)
This Israeli electro-pop three-piece groove to the rhythm of their hearts on the ultra-smooth “My Only Love,” the first single from the trio’s forthcoming EP, Modern West (out April 6 on BLDG5 Records). Layering glistening disco synths with twinkling keys and sensual falsetto, Garden City Movement easily recall previous sensitive dance hall kings (and queens) like Hot Chip, Glasser, and How to Dress Well. It’s enough to make you re-check the age restrictions for Birthright. R.B.

Oh Wonder, “Lose It” (Self-Released)
London-based electronic duo Oh Wonder have been dropping a new track every month for almost half a year now, but their latest might be their best. “Lose It” is an extremely chill track that starts out quietly, but the precise piano and snapping beat build up to a bold crescendo until, suddenly, the song gets quiet again, heeding the lyrics’ advice that “you gotta give yourself a moment, let your body be.” JAMES GREBEY

Your Underdog, “No Swim Zone” (Self-Released)
“Are we there yet?” Your Underdog plaintively asks in this bouncy new cut, which comes coated with all kinds of sharp, scene-stealing synths. It sounds like the New York City native has reached his final destination — that is, if Point B is an echoey homage to every John Hughes movie score ever, or, more recently, Bleachers’ punchy “I Wanna Get Better.” Turns out “there” is a good place to set up shop. R.B.