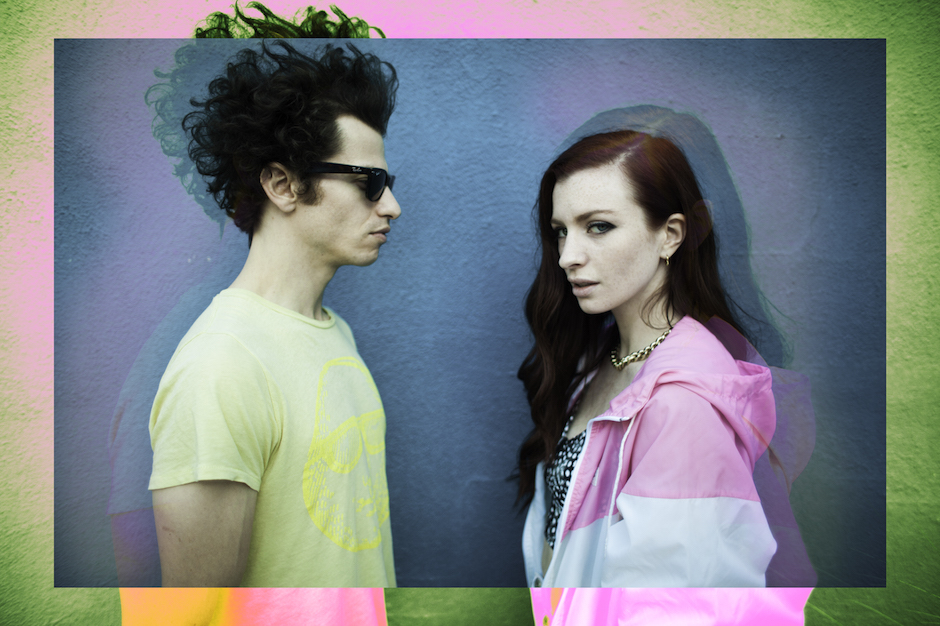 CREDIT:Photo by Kaitlin Christy for ASTR

Zoe Silverman and Adam Pallin only met a couple of years ago, but their musical backgrounds stretch back further. The latter is a producer and keyboard player who comes from years of composing and songwriting experience, having spent time in the semi-successful retro-pop band, Little Jackie. The former, the group’s constantly-in-motion frontwoman and singer, is the daughter of Tom Silverman, the legendary Tommy Boy Records founder who molded the legacies of artists including De La Soul. The pair first crossed paths in a Manhattan yoga studio, noticed that they shared a love of old-school R&B and electronic music, and paired up shortly thereafter.

ASTR have done their best to remain active since the release of Varsity (a trip-hop-minded electronic effort that SPIN named as one of the Top 20 Pop Albums of 2014), though they haven’t let appearances at festivals like Sweet Life and SXSW keep them too distracted from their debut’s follow-up. “We never stopped writing,” Silverman says over the phone from Los Angeles, where she and Pallin are currently putting the finishing touches on their upcoming sophomore EP, Homecoming. “The music is the same in the sense that it’s nostalgia pop and it’s definitely R&B-electronic. But it’s different because there’s some uptempo numbers on the next record. It’s definitely an evolution.”

For Homecoming, which is coming via 300 Entertainment, Silverman says that her lyrics often focus on industry sexism. “[As a woman], if you have an opinion and you know what you’re doing and you’re discerning and have ideas you’re not afraid to tell, you’re very quick to be judged as being a bitch or a diva,” she says. “For a man, when they have a plan, there’s so much respect. It’s really hard to be respected, and our culture in general raises women to be meek.”

The discouraging industry norms that Silverman encountered have, understandably, made their way into the band’s creative process. “In general, I’ve been seeing a lot of extremely wealthy, old, white men recently, and it just fucks with my head a little bit, so I’ve definitely been writing about it,” she says with a laugh.

Though Homecoming won’t feature a cover of one of their favorite songs — like Varsity’s stripped down, organic take on Drake’s 2012 slick synth-rap hit, “Hold On, We’re Going Home” — ASTR will honor another hip-hop favorite of theirs with a standalone version of Rae Sremmurd’s recent breakout single, “No Type,” sometime next month. “Recording it was tough, because we really wanted to put a twist on the record,” Pallin notes. “Lyrically, there was some stuff that just wasn’t gonna work for our version. We played around with it. We definitely took some liberties.”

Silverman and Pallin also happened to run into Drake in a club recently, more than a year after their cover of his single went viral. “We played a show at the Troubadour the other night, and afterwards, we went to this club, Nice Guy,” Silverman remembers. “When we walked in, I walked right by Drake. My friends went up to him and were like, ‘Oh my God, we’re such big fans.’ We would’ve had so many regrets if we didn’t say how much we loved his music. He held my friend’s hand and kissed it and was like: ‘Have no regrets.’ He was just as romantic in person.”

ASTR have also already used 2015 as an opportunity to sharpen their skills, with a noteworthy production credit on Joey Bada$$’ debut album. “Joey had a song that he started with Chuck Strangers that he wanted to just bring another element to, one that was faster,” Pallin says of the quick-stepping “Teach Me,” which features Kiesza on its chorus. The pair also just clocked studio time for a separate forthcoming project with Rodney Jerkins (a.k.a. Darkchild, the producer responsible for massively successful classics like Brandy’s “The Boy Is Mine” and Destiny’s Child’s “Say My Name”) and Brian Lee, who produced Icona Pop’s “All Night” and the 2012 Owl City/Carly Rae Jepsen collaboration, “Good Time.”

With the five- or six-song Homecoming on its way — “We’re just waiting on some backend stuff,” Silverman swears, with a single, “Activate Me,” set for late February — ASTR are looking forward to festival appearances in Miami (Ultra), Georgia (Savannah Stopover), and New York City (Governors Ball). “I think we’re also really hoping to get radio [play],” the singer says definitively. “We’re building our team right now, and we really want to get on a great tour and get seen in front of as many people as possible.”

SXSW 2016 Announces Third Round of Performers, Including Bloc Party, the Dandy Warhols, More

Redlight Remembers ‘Me & You’ With ASTR’s Astral Help