Polarizing indie-folk singer Mark Kozelek is 47, with 25 of those years spent in the musical limelight, playing hushed songs colored with an increasingly wry and realist writing style. The man who records as Sun Kil Moon may insist that 2014 isn’t the “biggest” year of his career, but it’s definitely the year he appeared in the most headlines. Aside from that whole “War on Drugs: Suck My Cock” fiasco, this year also yielded one of the — if not the — most acclaimed album(s) of his career, Benji. A deeply autobiographical work, the word-stuffed LP touches on tragic deaths in Kozelek’s own family, tries to make sense of the Newtown massacre, and ends on a lighter personal anecdote involving a Death Cab for Cutie concert. Kozelek’s matter-of-fact delivery brushes through details unlike many things before it — no wonder SPIN ranked it as the sixth best album of 2014.

Over an email exchange, Kozelek tied up some of the loose ends from Benji, expounded on the highlights of his year, and hinted at future plans. (He also declined to comment any further on his relationship with the War on Drugs.)

Now that it’s been out for almost a year, what feels different about Benji to you, from your other records?
I guess this one has a pretty strong focus on Ohio, and my roots. It wasn’t planned. My second cousin passed away and I went back there and all of this stuff came pouring out of me.

You probably gained more new fans in 2014 than any other year since possibly the Red House Painters era, and many consider Benji to be your best album. Do you consider it your most successful year?
I’ve been in the business a while now, so journalists were asking me this same question about Songs for a Blue Guitar. That one was released by Island, we toured like crazy, licensed songs to TV/film (a Gap commercial, as one example) and the Crazy Horse-style guitar brought a new level of fans. so it’s all very relative.

If you’re 25, I could see how you could be tricked into thinking Benji is my most successful record, but I’ve been doing this long before online magazines existed. This year has been busy — but 2012 also had me very busy with Among the Leaves. I toured Australia/Asia, was all over the place. I was also busy in ’93, touring those Red House Painters albums. NME and Melody Maker were saying I was the next Lou Reed or Van Morrison. So, everyone has their own version as to when the height of my career was.

Benji has remarkably literal, straightforward storytelling, with very little metaphor. Do you feel like you’ve saved up these stories for years until you had a way to bind them together? Or did you just look at songwriting a completely different way?
I got to where I don’t have an interest in working real hard at writing. I don’t have anything to prove as a writer anymore. I write about Panera Bread or Red Lobster or Satan or Richard Ramirez or whatever comes to mind. I just write.

People who ask about your songs seem to be mistaken that the song is the start of a conversation, when you’ve described them as an endpoint. What are some things you’re still processing that haven’t yet become finished songs for the next record?
“People who ask about my songs and what they’re mistaken with” is a ‘their problem, not my problem’ situation. All I know is that I’m in Duluth, Minnesota at the moment and I’m going to see a bantamweight fight in about an hour and I’m really excited about it!

Do you think you will continue writing in this mode, where you’re the narrator?
Probably. It’s where I’m at, at the moment. I’m doing what comes natural to me.

There are Sun Kil Moon songs from the last couple of years dealing with the cult of celebrity — “The Moderately Talented…” and “Ben’s My Friend” — and this year you engaged in somewhat of a public reputation. What kind of feelings has it stirred up for you?
It tickles me — gives me a warm and fuzzy feeling. If people want to write long, rambling, pathetic articles about how sad they are about song titles, have a blast! I’ll be out playing music to a room full of people, having a great time.

You changed the names of people on the record, like the titular character in “Jim Wise.” Was there a past incident that made you cautious?
Now that he’s dead, I’ll tell you his name is John Wise. He was a friend of my father’s. My dad and him met three times a week for lunch for many years. John murdered his wife and was later sentenced to seven or eight years. He died of a heart attack this year, chained to a bed in an institution. My dad was on his way to visit him when he got the call. Thanks for bumming me out. But hey, that’s life. I change the name of the living sometimes, to protect them, or their families, but John’s case made [New York Times] news. It’s just a really sad story. I knew John and he was a wonderful person.

What was the best thing about this year for you?
A hug from a guy in Portland, Maine. He was in a wheelchair and he was up front and called out for songs all night and said he’d been waiting 22 years to see me. An hour-and-a-half after the show, I was outside with Steve Shelley and the others, and this guy pulls himself around the corner and asked me for a hug. I hugged him and he wouldn’t let go. I held back my tears but when I got back to my hotel, I cried like a baby. His name was Mike. Mike, if you’re reading this, you made my year. Thank you!

And I finally met Isaac Brock in Austin a week ago and we had a nice conversation. Man, what an inspiration he has been. 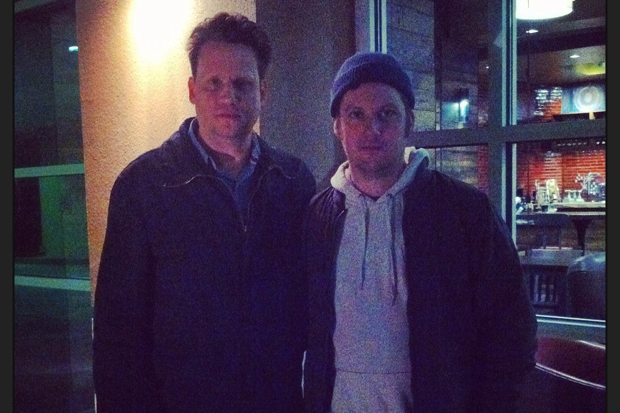 What was the worst?
A close friend of mine has been struggling with an autoimmune disorder, that’s been weighing on me a lot.

What do you wish you did more of this year?
Exercised.

What was the most exciting boxing match you watched in 2014?
I guess Mayweather/Maidana because I had a lot of money on that fight. I lost. I picked Maidana. Don’t know what I was thinking. Also Abregu/Ali, that was a truly exciting fight.

What was the best thing you ate this year?
Whitefish and smoked salmon at Northern Waters smokehaus in Duluth.

How do you feel about the popularization of feminism in pop music this year?
Prince had a great band on SNL and Kaki King is a great guitar player and Lena Dunham is funny as hell. It all works for me!

Finally, how early is it appropriate to start playing Christmas music?
I started singing Christmas Carols just after Halloween, as a kid. We’d go door to door, charming our way into people’s houses so we could steal prescriptions out of their medicine cabinets. Heading out to this fight, have a good night!