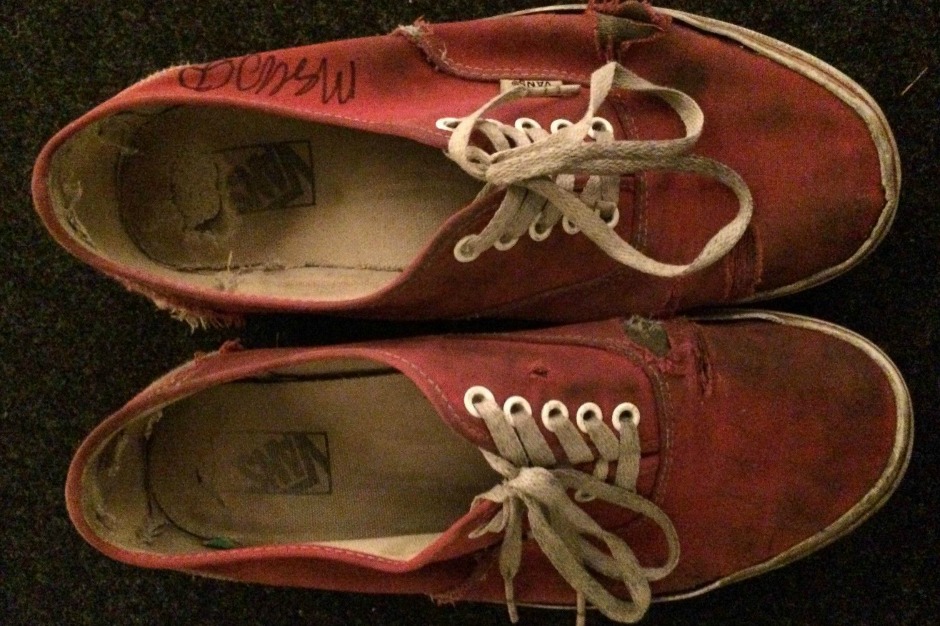 UPDATE: At last, somebody has purchased DeMarco’s sweat-soaked shoes. The verdict? $21,000 big ones. Not only that, but over the course of the auction, DeMarco answered a few questions from fans and filmed a video where his girlfriend actually sniffs the shoes to prove that they don’t stink too bad.

Q: i love you but my mom thinks that you are a reckless hillbilly who does nothing but smoke cigarettes and be foul. can you convince her otherwise? i cant seem to convince her myself. P.S. you should play an all ages show at brooklyn sometime goodbye mac (i love you)
A: Not a hillbilly, just Canadian, there’s a difference. Sorry mom. We’ll do a bk all ages show soon

Q: I don’t know what to eat for Dinner, mac demarco. should i just eat some chicken or should i eat some pasta?
A: Maybe a combination of both could be good

Anyway, once the autographed shoes have sold, DeMarco will donate the proceeds to the Willie Mae Rock Camp for Girls, which is pretty righteous. Here’s what DeMarco had to say about the auction:

I’m selling an old pair of my shoes. I’ve John Hancocked the left shoe. Will anyone buy an old stinky pair of shoes? I don’t know. lets wait and see.

I’ll probably throw some other crap in the box before shipping it, I dunno what.

If you’re one of those kids who tried to take them off my feet while I was crowd surfing at some point this year, nice try jackass. But hey, here’s another opportunity for you to have them.

All of the profit will go to Willie Mae Rock Camp for Girls.