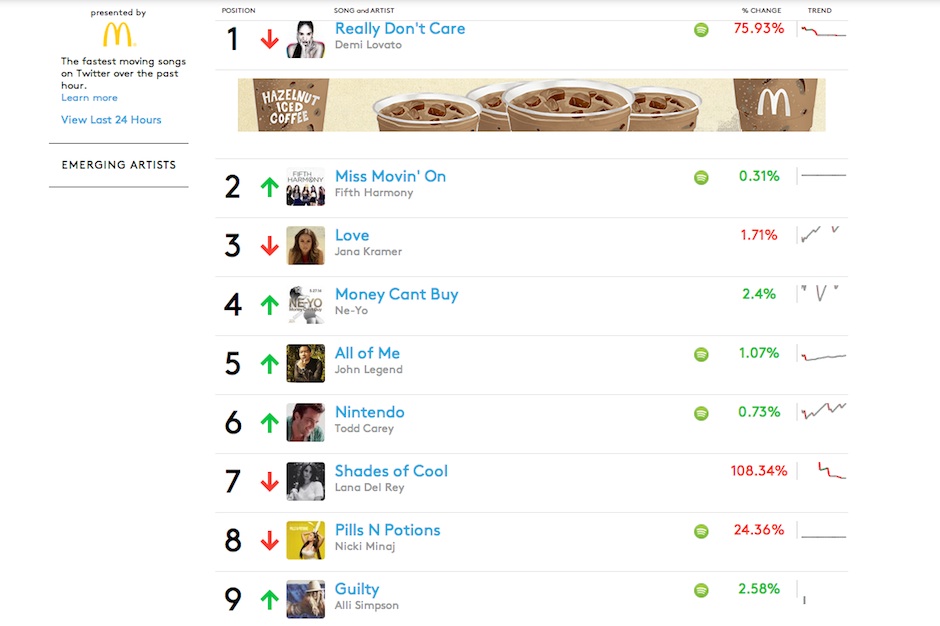 Music listeners find and share new songs through social media, and now Billboard and Twitter have launched the newest campaign to measure and track those online actions. First announced in March, and coming on the heels of last year’s short-lived Twitter #music initiative, the Billboard Twitter Real-Time Charts are online now. Where traditional charts are weekly, the new system homes in on minute-to-minute social media trends.

Leading the way is the Trending 140 chart, which the industry bible describes as “an up-to-the minute ranking of songs shared in the U.S., measured by acceleration over the past hour.” Also new is the Emerging Artists chart, which measures “the most shared songs on Twitter in the U.S. by up-and-coming artists ranked by the number of times each song was shared over the past 24 hours.” Each chart will also receive a weekly round-up version.

The Billboard Twitter Real-Time Charts draw on multiple data sources. Links to Spotify, Vevo, iTunes, and other music-listening platforms make up one ingredient of the recipe. Hahtags such as “#nowplaying” or “#np” also factor into the equation. Words like “music,” “song,” “track,” and “listen,” too, will cause the charts to take note. In essence, we’ll all have access to a whole lot more data on how music gets shared over social media, and having a No. 1 song could soon become an even more ephemeral form of success than ever.