The Cool Kids Talk ‘Shark Week’ and the Perils of Biters

The Chicago rappers fear they were a little too influential, if you know what they mean 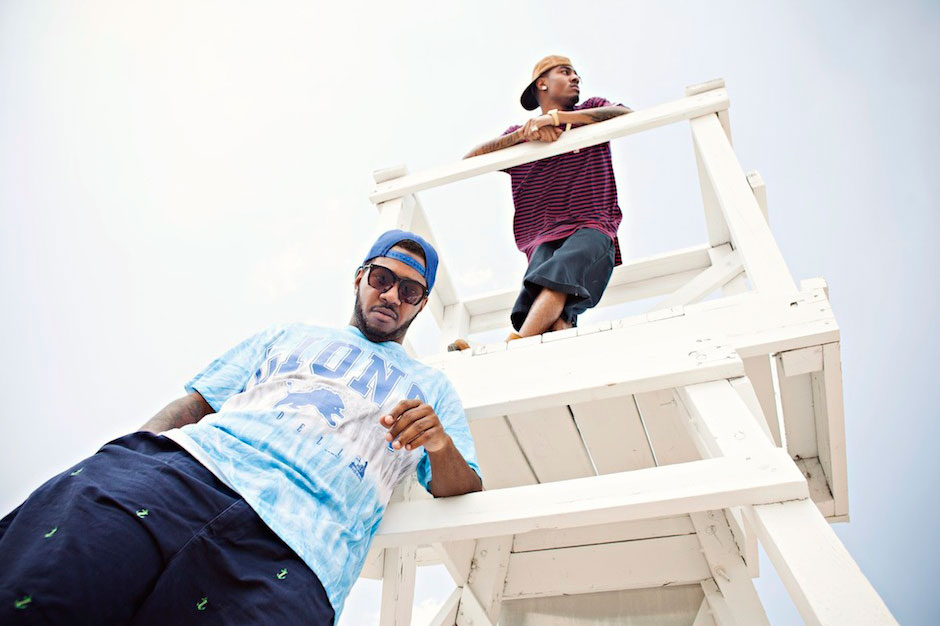 “Man, you want to roll up a newspaper and swat those bitches before they bite you,” says Mikey Rocks. The rapper and one-half of Chicago duo the Cool Kids is explaining how he dealt with waves of unrelenting mosquito attacks during a recent trip to Jamaica, a parasitic plight he twists to reflect the nature of the hip-hop industry: “I have the same idea when it comes to biters for music and style and all that stuff they like to sink their teeth into — swat those bitches before they bite you.”

Mikey is in a feisty mood today, energized by the news that he and his partner, Chuck Inglish, have announced a Cool Kids reunion and are readying a new album titled Shark Week. It’s the duo’s first substantial release since 2011’s When Fish Ride Bicycles, which saw the two fashion-forward kids from Chicago’s South Side suburbs lining up with Travis Barker, Bun B, and Ghostface. A hiatus followed for the group, but ended earlier this month when Chuck tweeted about a reunion and released a couple fresh tracks: The punchy “Chop” (featuring IAMSU!’s HBK Gang) and the shuffling funk of “Computer School.” Fans took to the Internet to get in on the excitement; Odd Future sock magnate Tyler, the Creator himself tweeted about how stoked he was to hear the news.

As the Cool Kids prepare to sink into the Shark Week recording process, Mikey spoke to SPIN about the catalyst for the reunion, Tyler’s socks, and the duo’s renewed commitment to putting their competition on blast.

Was there one specific conversation you and Chuck had about reuniting?
Yeah, there was. It came about a couple of weeks ago: Chuck woke up, sent a text talking about wanting to try some new sounds together, sent me the tracks. I heard them, and I knew we were ready. It was that simple, basically.

Were you surprised when Tyler, the Creator tweeted he was excited about you guys getting back together?
It was dope, man. I’m a fan of Tyler’s as well, so it was cool to see him show that love, especially with all the success of Odd Future. I’m glad to hear that we had that influence on him, to spark some of his ideas and help him find his own lane.

Is there any chance Tyler will be on Shark Week?
I don’t know. Maybe. I know he’s talked to Chuck a few times. I’m not sure where they’re at, but it’s definitely possible, ’cause obviously he likes us.

As someone into fashion, what do you think about Tyler’s range of socks?
I feel like he really captured a lifestyle. It’s like a couture line more than merch, you know? When artists do merch, they usually put their name and album cover on it, but his merch is more like a clothing line. It’s cool to see him being a creative guy and having the merch not really say “Tyler” on it. I actually heard he did Kanye’s merch for the last Yeezus tour, whether helping to design it or having a hand in it. I can see why. [Kanye] probably understood how powerful his merch was and the outcome.

What was the first song you recorded after reuniting?
“Chop,” which we did out in L.A. We had the intention to take our shit back. We wanted to come with our sound and our content and subject matter, and basically show everyone why you loved us in the first place.

Will “Chop” and “Computer School” be on Shark Week?
At this point I would say yes. Those two tracks really capture the sound and the essence of us.

How many songs have you completed?
Right now there are four. We work really fast, so we basically are waiting for a couple of little things so we can go out of the country — we want to go to the beach and record. We can make the album in like two weeks, pretty much.

Will there be many guests on the album?
So far, it’s just us, but that’s definitely something that me and Chuck need to talk about. We haven’t talked about it yet. Usually, with the Cool Kids, we’re self-produced, and we have such a unique sound that it makes sense to keep it in-house. We already got IAMSU! and the HBK Gang on “Chop,” so there’s no reason why more can’t be added.

What’s the meaning behind the title?
I’m a big fan of animals, and we’ve kept a theme of always relating our album titles to fish somehow. To us, the fish theme is a deeper meaning than most people would understand. You know what sharks do? Sharks are biters. We feel like after our first couple of mixtapes, a lot of people started biting our style, biting our look, biting our music, so now we’re addressing all of that stuff.

Are you going to be naming names?
Maybe. It’s not really about other people as much as giving you something to bite. We’re not about to blow your name up and make you feel relevant. We’d rather just give you more to bite: You wanna bite the look? Here’s the craziest one. You wanna bite the sound? Bite this, you know?

How did you feel the first time you noticed other artists imitating the Cool Kids?
Man, that was so weird, because I’m just a kid that came from the south suburbs of Chicago, so I was coming into the game thinking people would treat it like they do in the streets. In person, when you see someone do something cool, it makes you want to do something cool yourself, but not just copy them. But when we got into rap, people were copying point blank, and they don’t have any shame about it, and other people would make them feel like it was okay. It was really weird to see that in people I looked up to and people who were famous before me. It alerted me to what kind of waters we were in — there’s a lot of sharks out here, and people will bite, so you got to protect your style and let people know they can’t just take your shit. When you have a group like us that are filled with endless ideas, we’re like a gold mine to biters. So now we’ve got to stamp our shit real hard before anyone else can claim it as their own.