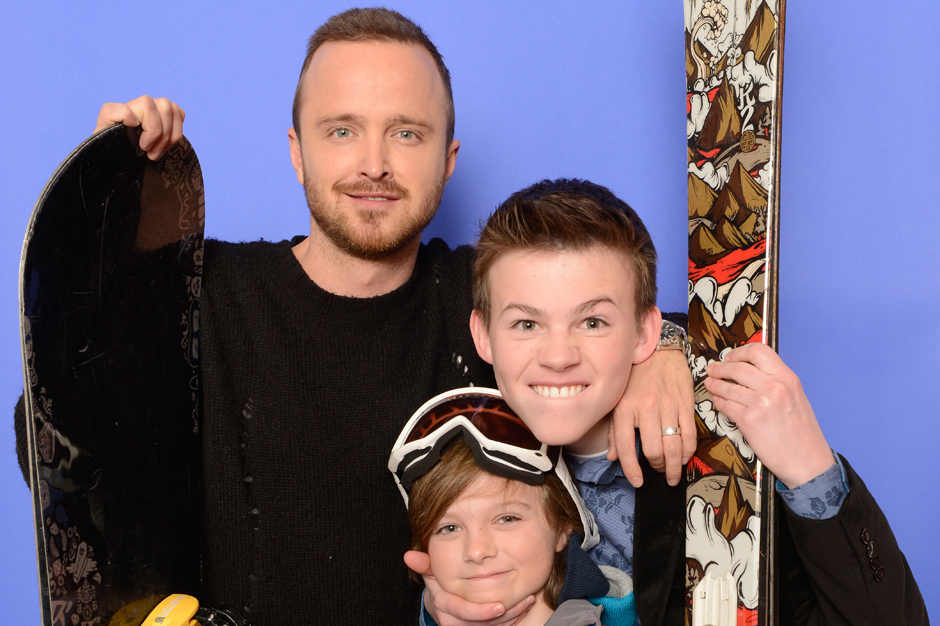 Breaking Bad’s Jesse Pinkman will be with us always, but Aaron Paul has got his own life to live. In addition to being a dedicated music fan (we’ll get to that), he’s co-starring in Hellion, an unflashy but highly effective broken-home drama that just premiered at Sundance. Director Kat Candler casts Paul as a widower too caught up in grief to show up for his two young sons. As a result, the older brother — 15-year-old rising force Josh Wiggins — is forced to play dad when all he really wants to do is play Slayer, ride motocross, and break shit.

The complexities of their relationship make the film, but it’s the ease of their friendship that stands out in person. Paul and Wiggins took a break from the usual Park City movie chatter and the biting Utah cold to share a couch and talk tunes with SPIN. Among the discoveries made: the little dude has the tastes of a very grown man, and the grown guy gets to live out a teenage dream by throwing concerts at his house.

In Hellion, you guys take turns looking after one another. Was it like that on set?
Paul: Absolutely. That was one of the things Kat wanted to happen — for us to get close and truly love one another, which I do. [Bumps Wiggins with shoulder] I love you, buddy.
Wiggins: [Quickly] I love you too. [Laughs.] There’s a lot of bonding behind the scenes.
Paul: But I love these characters, and I think that’s what drew us both to this project. They’re kind of beautiful and so honest. And so, so sad.
Wiggins: You really see these frustrations that Jacob has over everything that’s happened. He’s just kind of saying, “Screw it,” you know? And he’s doing these destructive things to vent because of the extreme responsibility on his shoulders.

And music is a part of the venting. Are you two heavy metal fans?
Paul: Me, I’ve never really gotten into that world. I can respect it, but it just never came. It’s so great though — our brilliant leader Kat, who’s this soft-spoken sweetheart, the kindest person in the world, she just loves metal. It makes you look at it in just a different light.
Wiggins: Yeah, I live in Texas. Metal’s not extremely popular around Cypress, but after this movie I’ve come to appreciate it more. It’s… different. I think I could listen to it.

Did you guys bond over other music at all while working on the movie?
Paul: He’s got incredible music taste. I told him this on set.
Wiggins: Really?
Paul: You don’t think you have incredible music taste?
Wiggins: No, I know I do…
Paul: Oh, you’re such an asshole! Just kidding, just kidding. We had this game where I would throw out my favorite musicians, and he would know all of them.
Wiggins: That’s because of my older brother. He’s a drummer, and passes all these songs and bands onto me.
Paul: That was my older sister for me. Her and my dad — he was a huge Beatles and Zeppelin fan. And my sister, I remember from adolescence on, she just always had Pink Floyd playing, and I just loved that music. Music is key to everything, for sure.

What’s a song that you listened to in the last 24 hours?
Wiggins: I listened to “Black” by Pearl Jam. I love that song.
Paul: [Flabbergasted] Oh God! That’s so good. The first album I ever bought with my own money was Ten. Every single song reminds me of my childhood. That and “Smells like Teen Spirit.” I’m trying to think… Oh! [Yells to wife Lauren Parsekia] Babe, Jake Bugg. What is the song we just listened to? [She shrugs.] Well, anything by Jake Bugg.

Josh, what’s an album you love all the way through?
Wiggins: Anything by Kings of Leon. They’re one of my favorite bands. And the Weeks: Gutter Gaunt Gangster [2012], Rumspringa [2009], and Comeback Cadillac [2008].

What was the last concert each of you attended?
Paul: We actually do a little series at our house. We’re gonna have Bugg perform next, but last time we had the Shivers — a phenomenal Brooklyn band. Also, another really young artist by the name of Nicole Vaughn. She is like a female version of Conor Oberst, and I know that’s a huge statement, because I think that Conor is a lyrical genius, but so is she. You listen to her songs — she’s a beautiful individual, but these songs are just so tortured.
Wiggins: [Embarrassed] Um, TobyMac. I went with my friend. Yeah… [Both laugh.] I’ve been to, like, one concert, and that was it.
Paul: Oh, I gotta take you to some shows. I followed Radiohead around a little bit last year, just because they’re my all time favorite. Thom Yorke is a god in my eyes.

Was there any music growing up that your parents objected to that you loved?
Paul: They objected to the music that they’d loved, which is so bizarre. My dad didn’t want me to listen to Zeppelin, I think because it reminded him of his wilder days, and now he’s a retired Southern Baptist minister. Before that, though, I think he… you know, growing up in the ’60s and ’70s, I think everyone was kinda running wild.

Josh, anything you’re into that your folks aren’t feeling?
Wiggins: Actually, my parents like a lot of the stuff I listen to. I’ll show them some Raconteurs songs, Ray Lamontagne, Joshua James… They’re pretty on board.

Last but not least, what’s your go-to karaoke song?
Paul: Anything by Journey. Because it’s not just you up there. You feel like you’re really a part of a movement when you’re singing Journey at a karaoke bar.
Wiggins: “Here I Go Again” by Whitesnake.
Paul: [Singing] “On my owwwwn…” [Mouths the guitar part.] Would you give us a little sampling? You seem like you’d have a really beautiful voice.
Wiggins: You don’t want that.