The Year in Miley Cyrus

Though it certainly felt like this was Miley Cyrus' year, when you plot it out on a calendar, all the truly zany stuff happened in about 45 days — the month of September, with bookends. That made her achievements all the more remarkable. If nothing else, Cyrus hijacked the zeitgeist long enough to kill Hannah Montana dead, and become ubiquitous enough to inspire a Dan Deacon remix, a Haim cover, and Migos' obsession. Bizarre as those bits are, they're only the cutting-room scraps. Please break out your stadium finger and cheer from the sidelines as we revisit the Year in Miley. CHRIS MARTINS

1.The Year in Miley Cyrus 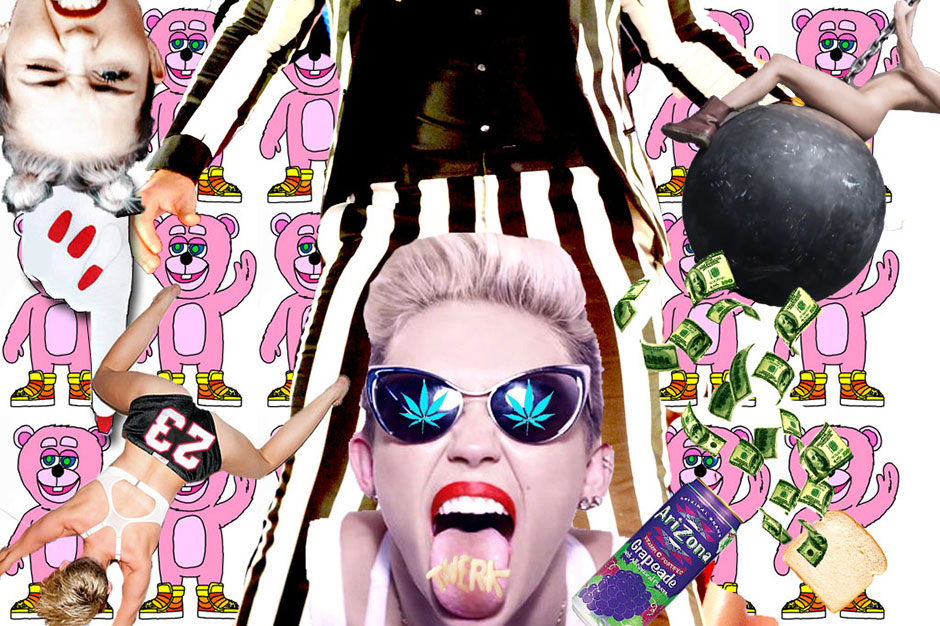 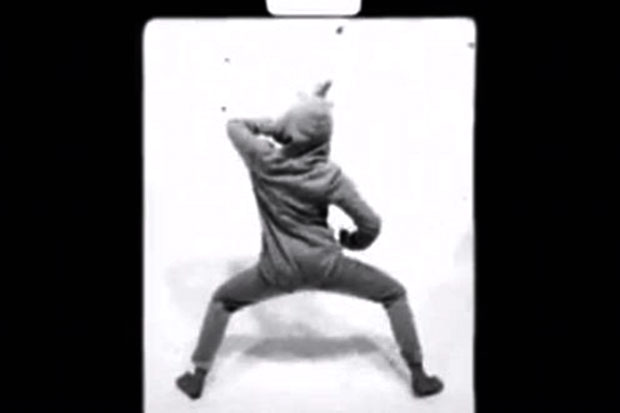 Cyrus uploaded a mysterious video to her Facebook page that gently teased her transition into edgy pseudo-maturity. She appeared wearing a Furry-like onesie, dancing wildly, and twerking. The video blew up and the song she was dancing to — J. Dash's "Wop" — snuck into the Billboard Hot 100, its ascent fueled in large part by Miley's viral appeal. BRANDON SODERBERG

Following her splash on Facebook, Cyrus released "We Can't Stop," a dead-eyed, slow-growing, bad-vibes=good-times party track created by hip-hop producer Mike WiLL Made It. The song, originally intended for Rihanna (and it certainly sounded like it), shot up the pop charts, peaking at No. 2. An American Apparel-esque video for the song soon followed, featuring an extension of Cyrus' Facebook video, with more twerking in animal costumes, as well as a number of black bodies dancing behind her. Before long, the latter generated ongoing controversy over appropriation and exploitation. B.S. 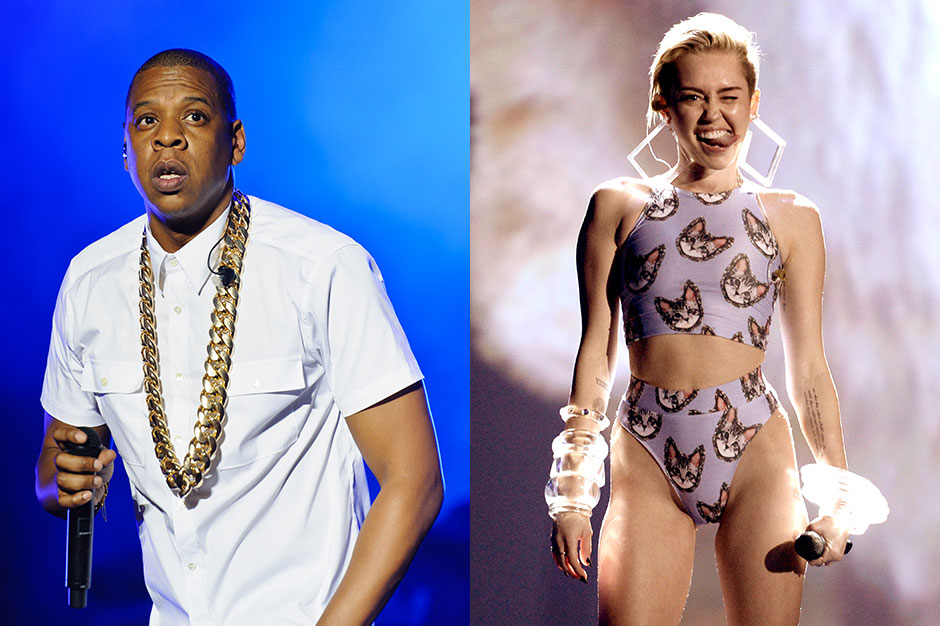 On "SomewhereinAmerica," a sketch-like rumination on influence and up-from-nothing success from Jay Z's Magna Carter Holy Grail, the rapper ended the track by declaring, "Somewhere in America, Miley Cyrus is twerking." It's Jay being bemused by the racial politics of 2013 and what he saw as another example of hip-hop's full-stop penetration of the mainstream, even if the old guard wanted to ban it or protest against it. "You can't teach racism when your child is connected to the culture," Jay Z told Elliott Wilson, turning Miley into a problematic symbol for post-racial politics. B.S. 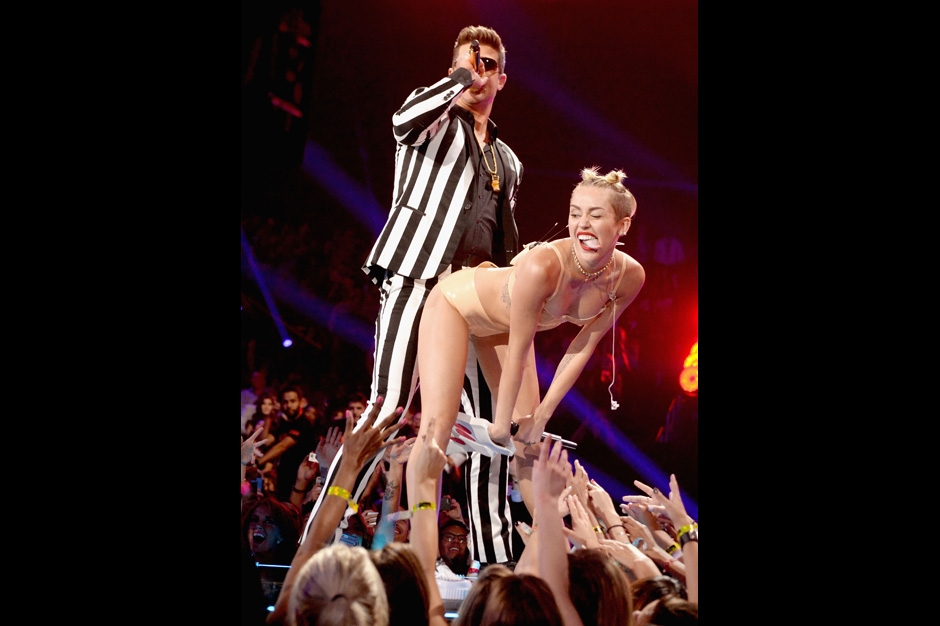 Somewhere in America Miley Cyrus is still twerking? Try everywhere in America. Or more specifically, in America's face via Robin Thicke's pelvis, which happened to be aimed at America's face anyway. A whopping 10.1 million viewers tuned into the formerly flagging awards ceremony, likely inspired by the immense and immediate word-of-mouth that took place during the "We Can't Stop"/"Blurred Lines" medley (306,000 tweets per minute). Our own Rob Harvilla described the spectacle as a collision between a Flaming Lips gig, a Pokémon-themed porno, a Japanese game show, and a "white girls twerking" YouTube clip. The world talked, while the über-conservative Parents Television Council (of which Daddy Ray Cyrus was a member) yapped about former child stars being used to hawk condoms. So, in other words, a real "you know you've made it when" moment. C.M.

6.August 28: "Twerk" added to the dictionary 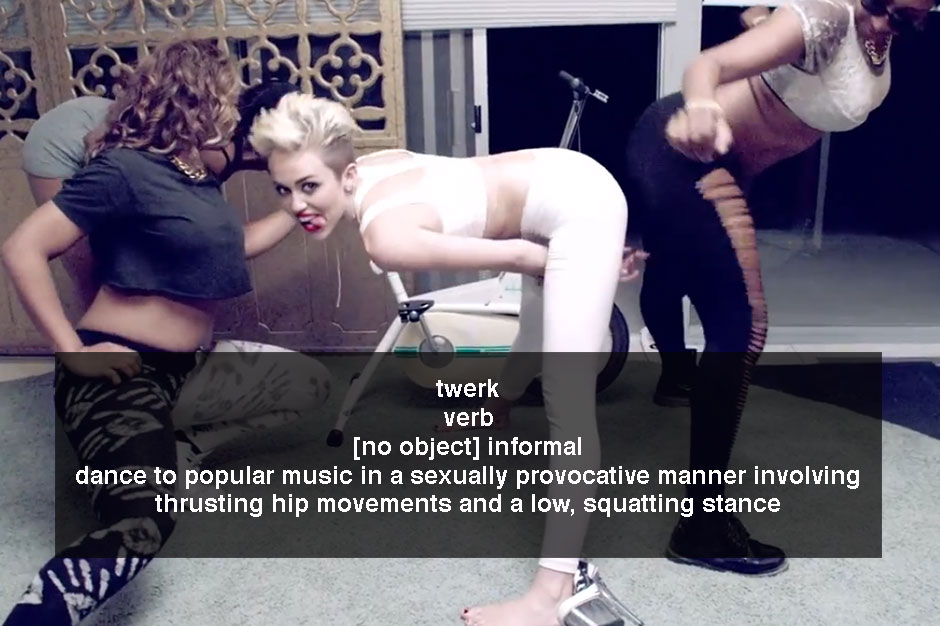 Twerk-mania hit its nadir. Because everybody's trolling these days, the Oxford Dictionary Online added "badassery," "selfie," and yup, "twerk" to the dictionary this year: "twerk (v.): to dance to popular music in a sexually provocative manner involving thrusting hip movements and a low, squatting stance." The word's official inception was serendipitously timed – just a few days after Miley Cyrus sent twerking mainstream and killed it dead at the MTV Video Music Awards. The day after the announcement, New Orleans bounce hero and the art form's primary purveyor for years, Big Freedia, criticized Miley's twerking skills in a conversation with FUSE, suggesting that whatever it was that Miley was doing at the VMAs wasn't even twerking. "We have a dance in bounce music called 'exercising' where you just open your legs and shake your butt a little bit from side to side," he said. "It was that part she did in front of Robin Thicke, but she still didn't even get that right because she didn't have any butt control. She needs more practice." B.S. 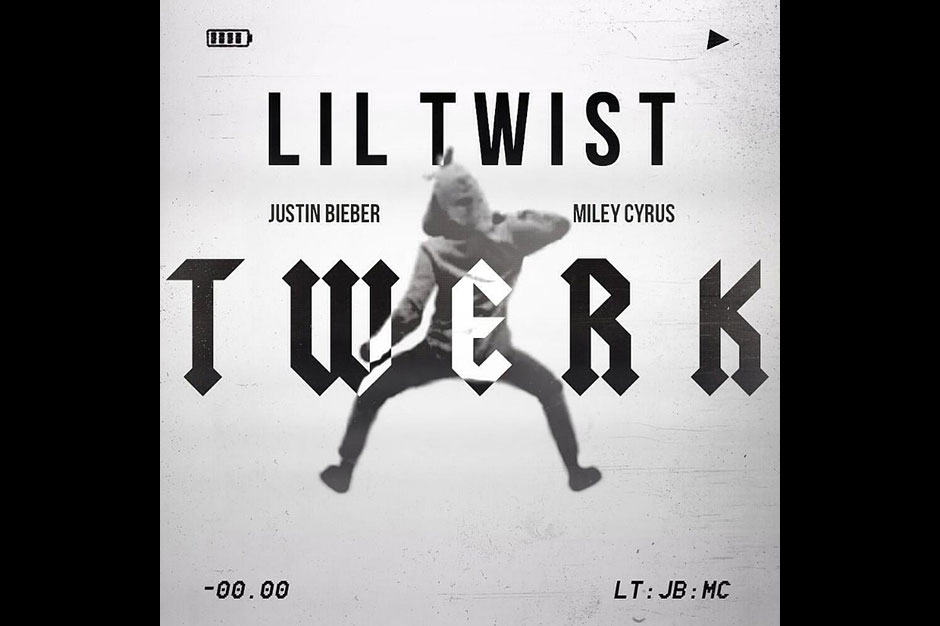 Two of the year's most insane narratives intersected on a song named after 2013's most un-killable hashtag and the results were as cheaply trend-chasing as you'd assume. Is there nothing these two won't co-opt in their mission to divert more spotlight in their own direction? This unholy and musically toothless union, on a Lil Twist song of all places, accomplished little more than the unceremonious shoveling of more grave-dirt atop twerking's queer New Orleans roots. C.M.

Yet another molly-popping, twerk-talking throwaway singl— wait, this song was actually really good. Almost good enough, in fact, to distract from photographer Terry Richardson's video, which built upon the naked heartbreak of the ballad and its titular theme of love as a brutally leveling force by, um, having a naked Cyrus straddle a wrecking ball as it swings around a room. And, wait, what's she doing with that sledgehammer? Why is she licking it? That can't be sanitary! What were we talking about? Oh yeah, a No. 1 song — "Wrecking Ball" subsequently demolished the charts, the clip having racked up more than 400 million clicks to date. C.M. 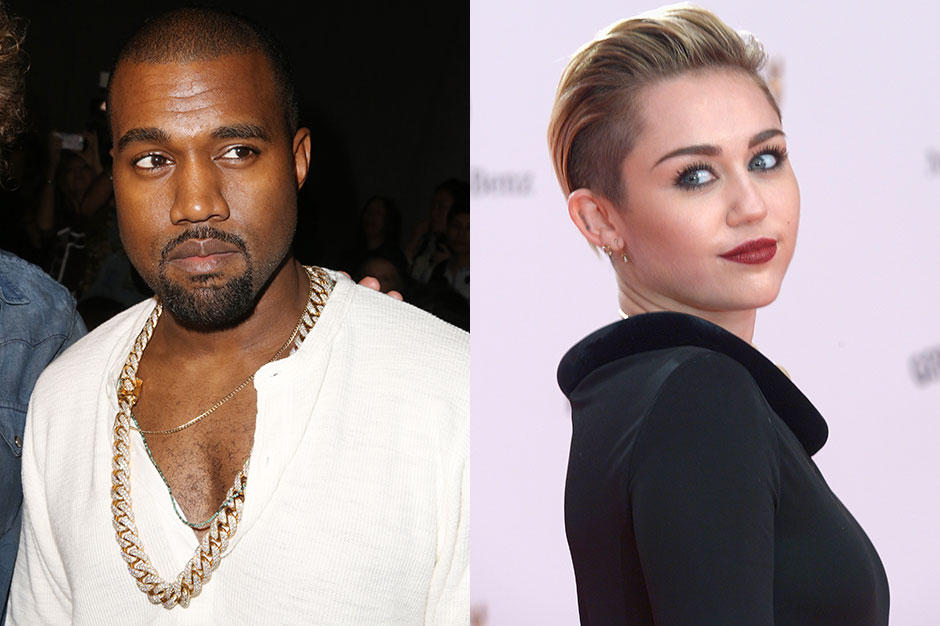 Following her controversial performance at the MTV Video Music Awards and the endless, thinkpiece-fueled "What does it all mean" chin-scratching that followed, Cyrus received a significant amount of praise from a few hip-hop bonafides. And supposedly, she recorded a verse for a remix of Kanye West's "Black Skinhead." According to producer Mike Will, Cyrus left the awards show early to go and record. Kanye confirmed the remix, which would've put the pop singer on his aggressive, no-holds barred critique of institutional racism and white appropriation and exploitation. Ultimately, though, the remix never saw the light of day. Was it ever even recorded? Did Kanye reconsider? Or was it all just a stunt? B.S. 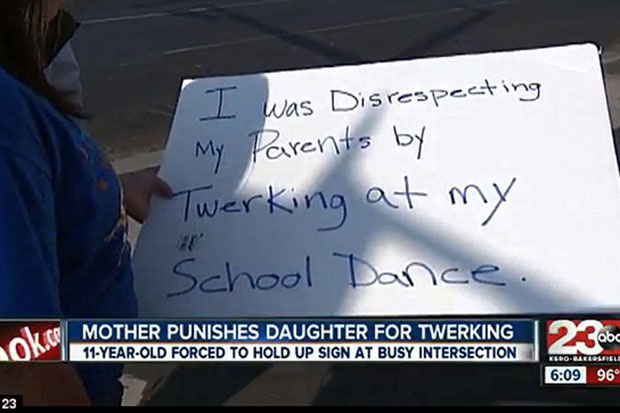 Okay, ready for this? So Francis Hena, a mother of an 11-year-old in Bakersfield, California, heard that her daughter, like so many other kids in 2013, was twerking at a middle-school dance. Hena then forced her daughter to stand at an intersection for two hours holding a sign that read, "I was disrespecting my parents by twerking at a school dance." B.S. 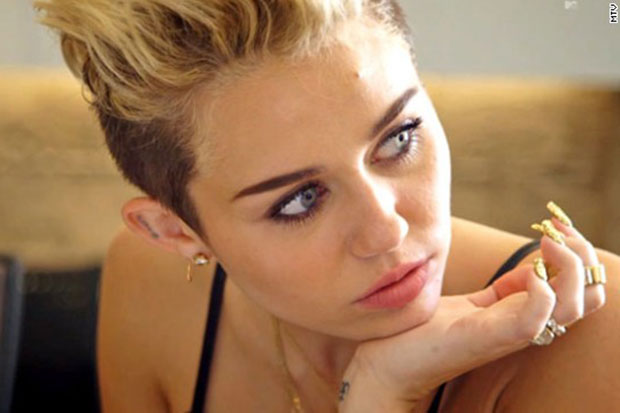 Because the Miley Cyrus machine is so well-oiled, her MTV Video Music Awards performance perfectly compounded the hype surrounding her album Bangerz. And so much of that buzz involved the singer spitting all of the critiques of her work back at the critics because, duh, she knew exactly what she was doing and she can't be stopped (save for questions of appropriation, for which no PR team could construct a proper, justifiable response) The MTV documentary Miley Cyrus: The Movement was based around the VMA performance and documented the three months leading up to it, which proved she did know exactly what he was doing and planned it all along. Whether that makes her troll job more admirable or more despicable is up to you, the viewer! B.S. 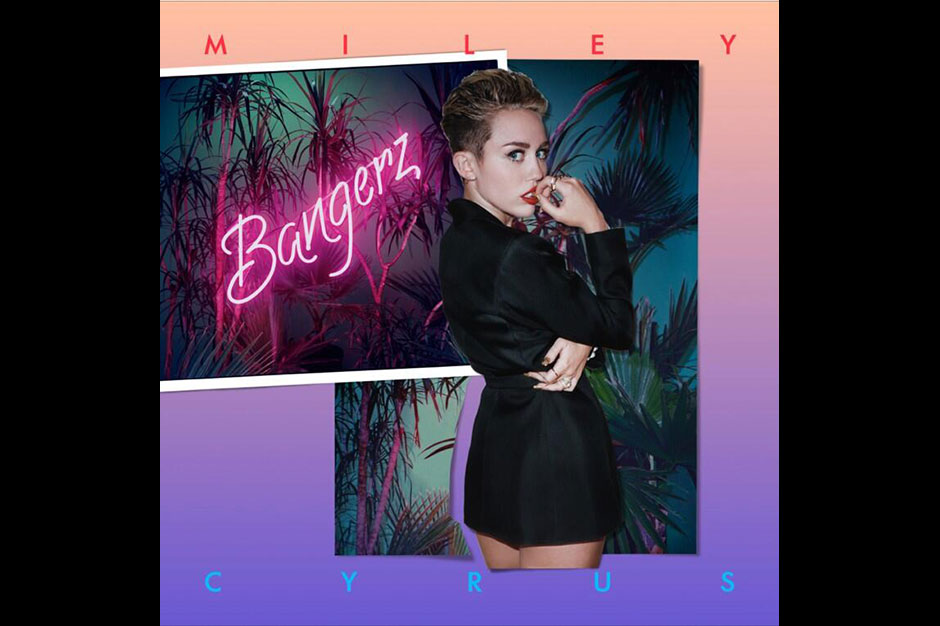 The point of this Nashville-born star's fourth LP was to reestablish her musical career after a brief return to acting, but the Bangerz promo cycle cast her in a hybridized role. As SPIN critic Jessica Hopper put it, "What is there to 'review' when it comes to a Miley Cyrus album... this latest iteration of her persona (code name: 'strategic hot mess')?" Still, there were facts to consider. First, production by a trio of distinctly talented hit-making geniuses: Mike WiLL Made It, Pharrell Williams, and Dr. Luke. Second, a whole bunch of guests with famous names: Britney Spears, Ludacris, Future, French Montana, Big Sean, and Nelly. And third, it went No. 1 here and abroad. C.M. 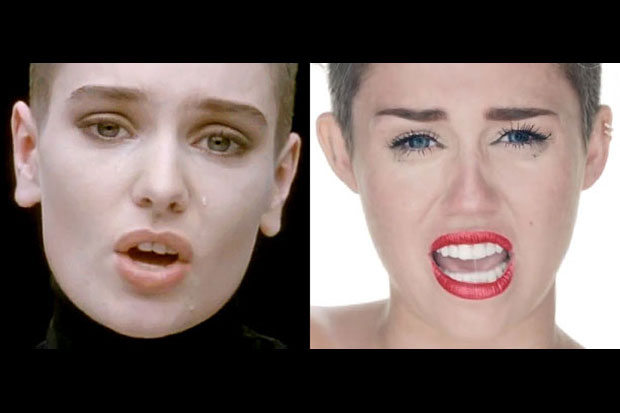 In her something-to-rile-up-everyone interview with Rolling Stone, the starlet dubbed her "Wrecking Ball" video the "most modern version" of Sinead O'Connor's iconic, tear-streaked "Nothing Compares 2 U" clip, kicking off one of the truly unpredictable subplots of the Year in Miley: a flame war with a politically minded, 47-year-old Irish singer-songwriter. Days later, O'Connor published an open letter advising that Cyrus "not let the music business make a prostitute of you." Miley fired back by rudely making fun of her opponent's struggles with mental health — which inspired at least two more open letters — before finally paying her respects in a chat on Today. C.M. 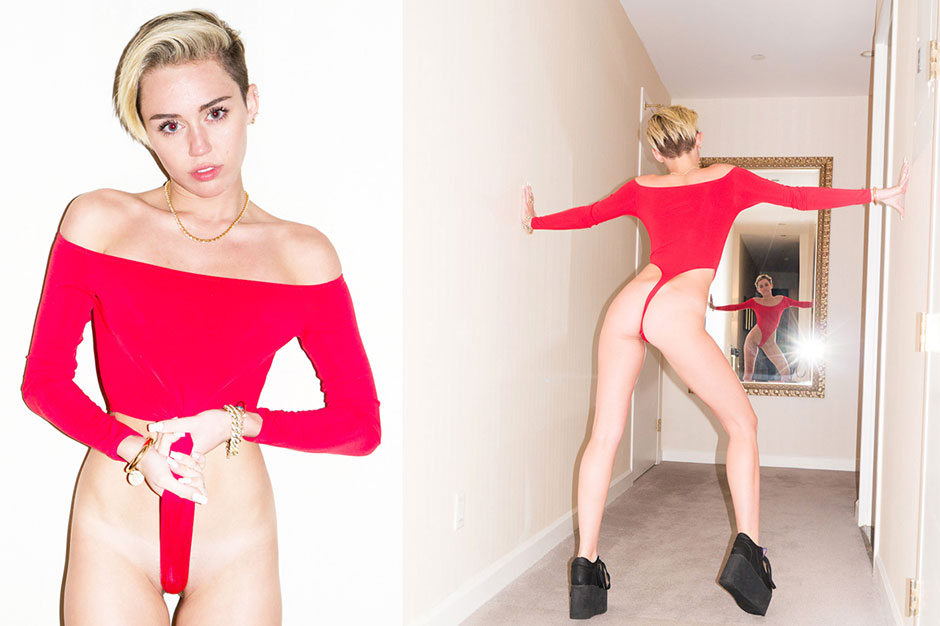 The arc created by the pendulous swinging of Richardson's unsubtle "Wrecking Ball" was completed when the inevitable happened: a combination of nip slips, see-through tights, blunts, wedgies, and priapic scenarios involving Arizona Grapeade hit the Internet and whatever shred of Miley mystery was left dissolved like so many molly pills in a starlet's stomach. We'd be shocked if the whole thing wasn't so textbook "shocking," but really it was the cherry on top of a slutshame-baiting sundae. C.M. 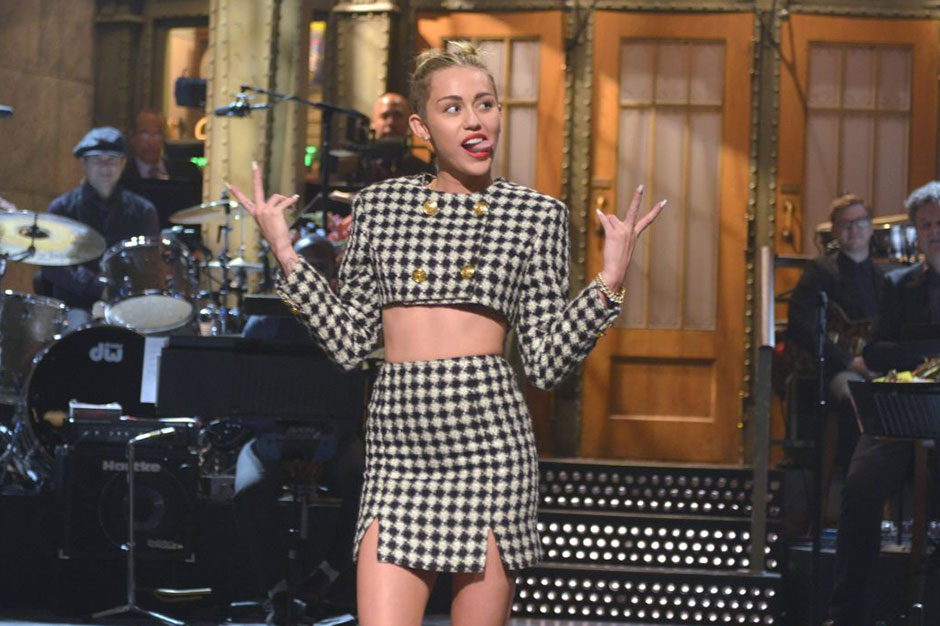 At last we learned why Miley kept sticking her tongue out and squinting like a scurvy-struck pirate — she's just really, really bad at winking. After a suspiciously concentrated bout of high-octane public wilding, she hit Saturday Night Live as both host and musical guest, and she did just fine. That's it. She wasn't awful or incredible — she did fine. Cyrus was funny, charming, together, and mostly clothed. She remembered her lines and played her songs without raising critics' hackles. By not rocking the good ship S.S. Lorne Michaels, she proved that she not only knew her limits, but that she knew what was going on the entire time. Wink wink. C.M.

Although the "Black Skinhead" remix never came to fruition, Cyrus became absorbed by the world of mainstream hip-hop on the strength of her assist on Mike WiLL Made It's "23," a remix of "Ain't Worried About Nothing" by French Montana (in which she rapped about molly), and Future's Auto-Tuning of "Stand By Me" on Bangerz's "My Darlin'." November saw the arrival of Future's "Real and True," featuring Miley (and a space-age video where she's naked) and "Feelin' Myself," a DJ Mustard-meets-will.i.am-like future-ratchet bonus track from the Black Eyed Peas' frontman's solo album #willpower. B.S.