BiS-Kaidan is a cross-generational coup de pop, uniting two acts from opposing ends of Japan’s musical spectrum. BiS (short for Brand-New Idol Society) are representatives of Japan’s “idol” scene, a culture of singer-dancer-celebs who define the country’s pop mainstream. Hijokaidan is an infamous art-noise improv troupe dating back to the late ’70s, famous for stage antics both familiar (squalls of feedback, guitar throwing) and less familiar (pissing onstage and rolling around in the puddles). Together, they’re an avant-pop supergroup seemingly brought together by the same forces that govern matter and anti-matter.

The video for BiS-Kaidan’s cover of Jun Togawa’s 1985 hit “Suki Suki Daisuki” is everything you really need to know about this mind-boggling collision — a mix of confrontational dissonance, sugary pop, and performance-art theatrics. Clad in gore-smeared sailor outfits, the members of BiS shriek, flail, wield chainsaws, and generally do their best Melt-Banana impressions while Kaidan coax unholy noise from guitar amps and electronics. Shots featuring BiS pouring buckets of slime over their own heads directly reference Hijokaidan performances from the 1980s. Hijokaidan founder Jojo Hiroshige explains, “The video is an homage to Hijokaidan, Hanatrash, and Japanese underground music.”

If anyone could bridge those worlds, it’s these two groups. Hijokaidan already tested the idol/noise waters as Hatsune-Kaidan, a collaboration with the Vocaloid character Hatsune Miku, a virtual singer and voice-synthesizer application. BiS, meanwhile, are idol culture’s enfants terribles. In videos, they’ve flirted with implied nudity, battled Samurai in their underwear, indulged t.A.T.u.-inspired schoolgirl kisses, rammed cameras down their throats, and donned corpse paint and Minnie Mouse bows over a soundtrack best described as bubblegum black metal. Their 2012 album was titled Idol Is Dead, but they could just as well have added, … Long Live Idol, given the group’s ability to tweak conventional pop mores from within the culture: They’re signed to Avex Trax, the major label behind more conventional idols like Ayumi Hamasaki and Namie Amuro, as well as the Japanese releases of K-pop’s 2NE1. 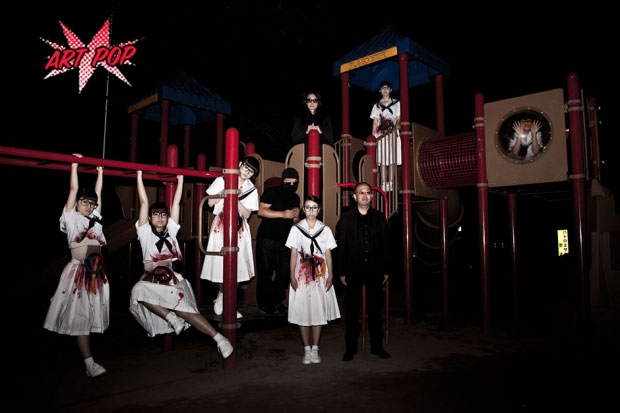 “In the beginning,” admits BiS founder Pour Lui, “the fans were a bit worried, and there were negative critiques. But BiS kept doing it, so gradually the fans accepted us as idols.”

You might think that neither groups’ fans would be too happy with the match-up, but apparently that’s not the case. “BiS fans know about Hijokaidan,” says Jojo, “but on the other hand, the fans of Hijokaidan didn’t know BiS.” It’s hard to imagine a Western parallel: Katy Perry diehards familiar with Wolf Eyes, but not vice versa? Says Pour Lui, BiS’ hardcore fans “are called Researchers, and they are crazy. Researchers accept everything that is fun. The members of BiS love hardcore music in the first place. They don’t like conventional idols, and they love music — many kinds of music.” “I knew what kind of music Hijokaidan was doing,” adds Tentenko, another member of the group, “but they were active when I wasn’t born yet. So it was kind of a shocking, impressive thing for me to work with them.”

“For me, it’s easy to art-ilize noise,” explains Jojo. “I’ve been doing noise for over 30 years. I don’t think I need to create art with this. It’s a wonderful idea – noise plus entertainment. Entertainment plus noise enlarges the border of noise. The noise can be transformed to another thing.”

When asked which icon he’d like to noise-ify next, Jojo doesn’t hesitate: “Lady Gaga!” Given Gaga sampling a Sun Ra cover on her recent “Venus,” perhaps Gaga-Kaidan isn’t such an absurd proposition.