At the risk of falling prey to the Intentional Fallacy, it seems safe to surmise that Tim Hecker was working through some shit on his last album, 2011’s Ravedeath, 1972. The centerpiece of the record was a pair of tracks called “Hatred of Music I” and “Hatred of Music II,” for crying out loud, followed by “Analog Paralysis, 1978” and “Studio Suicide, 1980” — titles that hinted darkly at the kind of claustrophobic neuroses and oversaturated anxiety-of-influence common to the electronic composer, even as the music spoke to ecstasy, transcendence, and the promise of freedom at sound’s molecular level.

Who among us hasn’t felt a similar rage? And Hecker, at least, has earned his frustration. The Montreal-based musician is noted for his perfectionism, a near-OCD attention to detail that yields richly hued, minutely pockmarked drone-scapes that are unusually rich in grain and nuance. “It’s maddening, listening to this shit in the studio by yourself at high volume for days on end,” Hecker told SPIN. “There are some times when I’m losing my mind, where pieces are crescendoing, and there’s 20 layers of things, and I’m trying to balance it to hit right — it’s technically challenging and spiritually exhausting…. In desperation, you think it’s just another record where you didn’t really get at what you hoped you would get at, because it went somewhere else, and so it’s this weird feeling of just being kind of a partial failure.”

Call it the anxiety of effluence — the fear that an idea will change course in mid-stream, stranding the original kernel on the shores of what might have been.

It’s understandable that Hecker might have feared he was hitting a wall, simply because his musical accomplishments up to Ravedeath could be tracked on a pretty straight line. From 2001’s Haunt Me, Haunt Me Do It Again across the half-dozen or so records that followed, his sound has deepened and improved, but its fundamental nature hasn’t changed much. With any given record, you could pretty well guess what you were going to get: resonant, electroacoustic drones sourced from piano and organ, and fed through increasing levels of distortion and digital fuckery, lending the impression of Stars of the Lid trapped in an Intel-Inside-equipped garbage disposal installed in Kevin Shields’ kitchen. Every record felt like a variation on one great, big, foggy idea, as though he kept trying and failing (in the fashion of Samuel Beckett’s “Fail again, fail better”) to articulate the throbbing ur-sound in his head. 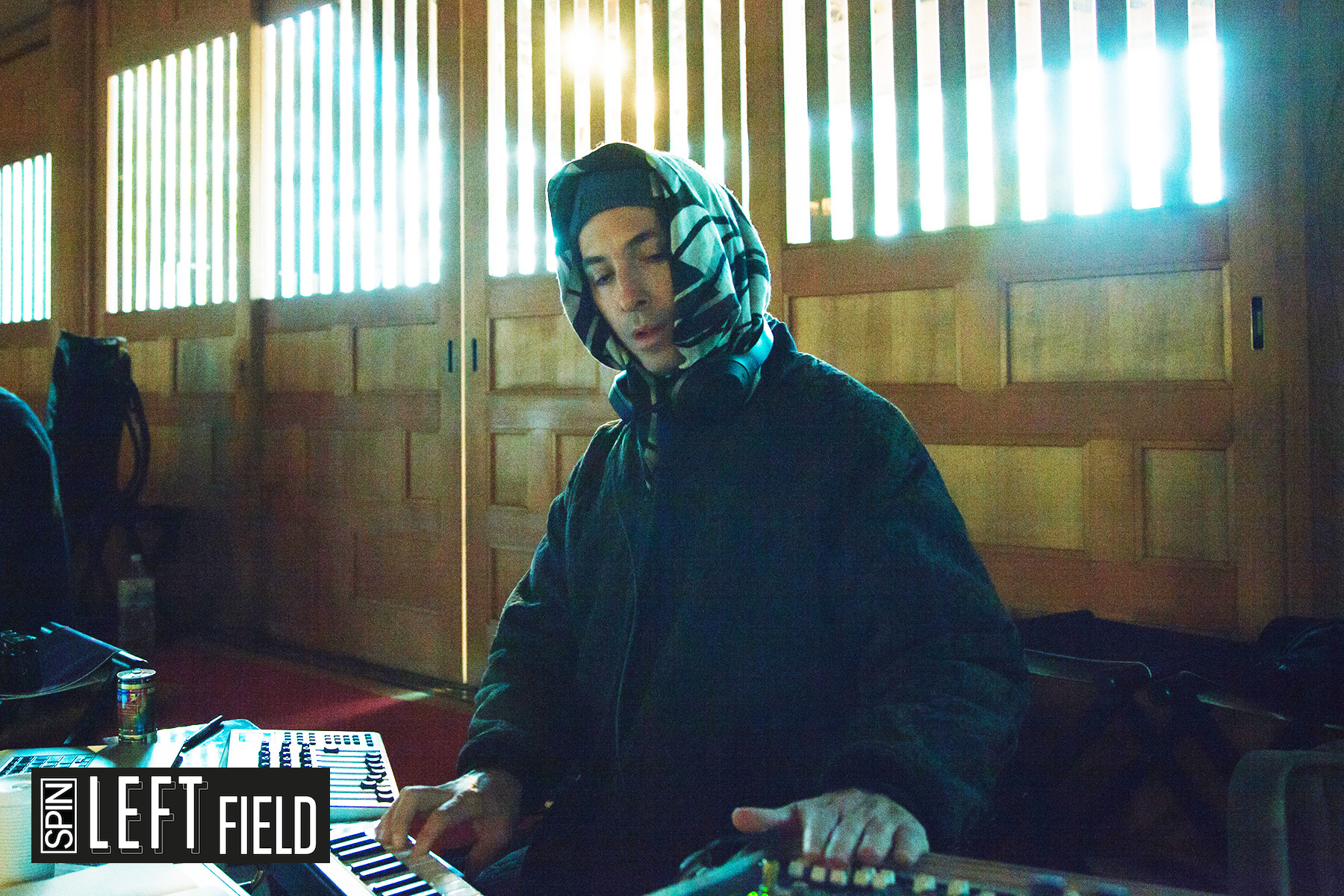 Ravedeath was clearly Hecker’s masterpiece up until that point, but it almost seemed to revel in the cul-de-sac that was closing in. Beneath the indescribable gorgeousness of its shimmering, pulsating vapor cloud, the music seethed like a wild dog cornered. (Perhaps that’s no accident, considering Hecker’s close creative relationship with Ben Frost, a musician whose own work has incorporated the actual sound of prowling wolves.)

Whatever creative demons may have haunted the mixing desk during the making of its predecessor, Virgins enacts a kind of rebirth — creative and, why the hell not, maybe even spiritual. It convulses with a sense of limitless possibility; it rolls up everything Hecker has done before this and, as is his wont, pulverizes it into a fine mash. What’s new is the thing he molds from the dampened ashes.

Some of this may stem from the fact that Virgins reflects a significant shift in methodology. Acoustic instruments like piano and organ always played an important role in Hecker’s music, but the source material here comes primarily from live performances in Reykjavik, Montreal, and Seattle, incorporating piano, synthesizer, and woodwinds. (It sounds like strings and choirs were involved, too, but perhaps that’s just an illusion produced by Hecker’s trickery.) That instrumentation brings a newfound sense of warmth to the music. The clarinet — particularly alto or bass, both of which sound like they’re in play here — provide one of the coziest sounds going, a deep, raspy, foghorn bleat, and Hecker isn’t afraid to strip away all the grit and fuzz and leave a pair of naked reeds breathing and buzzing, their phased pulses and pitch differentials beating like the wind in your ears.

Whereas so much of Hecker’s catalog until now has been about density — the product of a working method that entails layering, processing, and re-processing his source material for weeks or months or years on end — here the music is suddenly about space. Pockets of empty space, to be precise, pulling at the fabric of the music from the inside, like holes in a sweater.

There’s still plenty of Hecker-the-Destroyer action going on, though. A monstrous rumble tears through the midsection of “Live Room,” as a passage reminiscent of AMM jamming with John Carpenter is drowned out by the eruptions of amps on the fritz; with the closing “Stab Variation,” the entire record seems to snowball into a single, imposing drone, complemented by the whining of a circular saw that cuts it all to pieces. But Hecker’s often simply content to let sounds be, to layer a handful of staccato piano chords backwards and forwards, like Steve Reich tangled up in Alvin Lucier’s tape machine, on “Virginal I”; or, on “Radiance,” to let a lone bass clarinet huff its way into the foreground briefly and melancholically, before it’s swallowed up by the shimmering mist.

Part of the album’s sense of space derives from the way that elements recur in the music, popping up at unexpected intervals like a lake monster perforating holes in the murk. Hecker has always been a fan of multi-part theme-and-variations, but here he spaces them out in ways that strengthen the album as a whole. The Reichian piano motifs of “Virginal I” turn up four tracks later as “Virginal II,” a reprise that starts out fuzzy and faraway before assembling itself into a beast even bigger than its first incarnation, and the whole thing is framed by two breathtaking drone pieces, “Prism” and “Stab Variation,” that feel like the fabric of sound itself is being pulled apart at the seams.

Virgins is also the most rhythmic album that Hecker’s ever done, thanks to the phasing and pulsing tricks he’s borrowed from Steve Reich and Philip Glass. They’re foregrounded in the pumping clarinets and pianos of “Virginal I” and “Virginal II,” and also in the keyboard churn of “Live Room,” which mashes Halloween into Koyaanisqatsi. (Speaking of film scores, both Penderecki and Ligeti, famously used in The Shining and 2001: A Space Odyssey, make their influence felt in Hecker’s dazzling spectral arrays.) But the album’s shifts in energy are typically propelled by more inscrutable impulses. In the nominally beatless “Stigmata 1,” organ overtones scatter like mica pumped through a bellows; in “Amps, Drugs, Harmonium,” an oscillating wheeze struggles and fails to keep time, stumbling over itself in arrhythmic loops.

Like so much of the album, “Amps, Drugs, Harmonium” sounds like a lament — and at the risk of reading too much into Hecker’s professed “Hatred of Music,” it sounds almost like a farewell tribute to repetition itself, a funeral march for the very idea that a form could ever contain its content without crumbling. Hecker’s abstractions have never been more expressive than they are on Virgins, and his containers have never been more fraught. His main compositional principle might have come from the late philosopher Marshall Berman: All that is solid melts into air. There’s an exhilarating bleakness at the center of Virgins — the hollow at the heart of all things, nibbling inexorably away.