Earl Sweatshirt’s ‘Doris,’ a Celebration of Language Itself, Is the Culmination of Many Hip-Hop Underground Dreams

Home » New Music » Reviews » SPIN Essentials » Earl Sweatshirt’s ‘Doris,’ a Celebration of Language Itself, Is the Culmination of Many Hip-Hop Underground Dreams

Let’s get this out of the way: This isn’t the same dude who blended up a 40 with cough syrup and weed, drank it, and fake-barfed in the playfully grisly “Earl” video. Back in 2010, Earl Sweatshirt was a wily 16-year-old wreaking havoc all over Los Angeles with his Odd Future homies, doing normal teenage shit like skateboarding and fine-tuning his gross-out humor. He’d never been shipped to a Samoan military school by his moms, never been hunted down by voracious journalists like he was vanished chess legend Bobby Fischer, never been chased down Fairfax Avenue by autograph-seeking fans upon his return. Doris is the first purchasable album in a still-teenaged career that’s already had so many dramatic twists it should be soundtracked by the Law and Order: SVU doing-doing noise, and it bears the brunt of that — it’s the sound of a young adult grappling with a brief but already plenty weird career arc you couldn’t invent, processing his pathos through wild creativity and (still) weed.

“Searching for a way to state it right / Young, black, and jaded / Vision hazy, strolling through the night,” as he raps on “Knight,” his lyrics screwed down to a thick-tongued stumble. Through a smoky veil of noise-cluttered boom-bap that lifts on Doris exactly twice — with the sweet horns of “Sunday” and the Technicolor wing-spread of the Neptunes-assisted “Burgundy” — he makes clear that there’s no more time for hijinks. Even in lines smirking with levity, the storm is rolling in, and the forecast is adulthood.

One of the absolute greatest things about growing up is reckoning with your parental baggage, and here Earl attacks his own with gusto: Both his mother and father loom heavy throughout — on “Chum,” a dad-related depression jam, and “Sunday,” a girl track that you could also interpret as being about his mother. (Each one adds to the rap pantheon of dramatic parental backstories, from Pac’s “Dear Mama” to Kanye’s “Hey Mama.”) But to that end, Doris is also a success story: Whatever he did to trigger that Samoan exile, Earl is a poster child for paying attention in English class, and his layered entendres are the stuff of impassioned web-forum parsing.

On “Whoa,” the woozy early single co-starring friend, “big brother,” and Odd Future ringleader Tyler, the Creator, Earl unpacks his “suitcase scented with haze and fileted sentences,” spitting in the same disaffected tone he adopts throughout, which is fine — a more dynamic vocal style might distract from the lyricism, and besides, Tyler has enough cigar-chomping charisma for both of them. On “Hoarse,” Earl is even diagnostic about his nerdy wordiness, beginning a dense verse with the lines, “I sit in thought ’til the flow is right / Then throw some D on all available open mics,” and ending it with the head-spinning “Who spit as good as fingerlickin’, bitch? / Bet it’s 36 fish netted like the hook was inefficient.” A 2013 rapper getting metatextual about bars! It’s an underground hip-hop head’s fantasy gone wild. 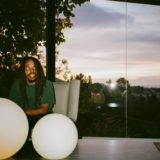 Enamored with language itself, Doris is a celebration of syntax, a yoga pose pushing the limits of the MC’s flexibility, and a reclamation of “that fucking flow the system so belittles,” as Earl raps on “Hive.” For all his sprawling and stretching, though, he’s also something of a formalist, hewing to rhyme structures tried and true within both his father’s poetry and his own profession’s predecessors (“Hive” lyrically invokes the ghosts of both Gil-Scott Heron and Tupac Shakur). That’s precisely why longtime acolytes of underground hip-hop will catch a certain type of vertigo from Doris — in other words, it will remind you that you’re old.

Indeed, Earl himself may be too young/irreverent to know it, but this is the culmination of so many ’90s L.A. underground dreams that never quite became overground reality, an album with the roaming avant-garde spirit of the weirder lyricists of crews like Project Blowed, but blessed with enough star power and sheer mythology to help Earl lap his forefathers’ decades-long careers in a tiny fraction of the time. (Somewhere, Aceyalone is listening to this and going, “Fuuuuuhhh.”) Not that it’s exactly awash in commercial appeal, though — there’s also the heavy specter of Doom (a recent Earl collaborator), and even a jazz-tinged, rhythmically shambolic interlude sprinkled here and there (see “523” and “Uncle Al”). No one’s gonna bump this as the soundtrack to a twerk contest (outside of, perhaps, Earl himself), which means it’s likely to have the same fate as Tyler, The Creator’s also too-weird-for-legitimate-mainstream 2013 album Wolf: The minotaurs at the end of the corporate-radio labyrinth will have no idea what to do with this.

Still, you can’t say that Doris, mostly self-produced under Earl’s beat-making alias Randomblackdude, doesn’t knock, even on weirder slaps like the murda-Morricone strings of “Hoarse” or the digital-illuminati choirs DaVinci Coding all over the jazz-club cymbal hits of “Hive.” But the record is at its best when he simply shifts into verbal overdrive, spitting gnarled bullets on the phenomenal robber’s fable “Centurion” or the weedy hallucinogen “Guild,” which can’t even be stunted by his friend Mac Miller’s awkward flow. Earl raps, “Tell the label I want a white driver / And tell him give me space, ’cause I don’t know that nigga.” He’s struggling to reconcile the unease of his past with the confusion of his present, but Doris proves that Earl’s future is secure.