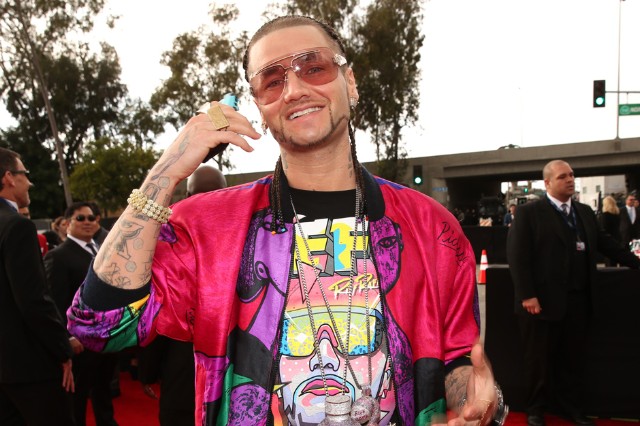 Mightily corn-rowed Houston-bred rap personality Riff Raff claims that he’s suing the creators of Spring Breakers to the tune of “8 to 10 million” dollars. His complaint: He has yet to be compensated for James Franco’s portrayal of Alien, a character that pretty much everyone understands to be at least slightly inspired by the larger-than-life MC born Jody Christian and his famous penchant for bright colors, complicated braids, Southern hospitality, and gold fronts.

Riff Raff and his devotees have been crowing about the issue since before the film came out — initially with glee, of late with a hint of menace — but he recently re-shared a photo that seems to leave no question as to his influence over the character’s creation. The image is an iPhone screencap taken from Instagram, showing Franco outfitted as Alien with about a dozen photos of Riff Raff on the wall (closet door?) behind him. Beneath the shot: “Film game riffraff.”

In speaking to TMZ, Riff Raff implied that he’s taken the filmmakers, or maybe Franco, to court, though the details he shared were sparse and muddled: “I haven’t been compensated for the Spring Breakers interactment [sic] with the James Franco and whatnot. We’re seeking eight to 10 million right now. And whatnot.” On Twitter he proudly declared, “HAVEN’T EVEN DROPPED MY 1ST ALBUM YET AND ALREADY ABOUT TO RETiRE @TMZ,” and called the photo a “confession.”

Given a little more time to elaborate on his complaint, Riff Raff chose his words to TMZ wisely: “It’s like if I have a front yard. And you’re planting soil and you’re planting trees and building peaches and houses and selling parking lots on my property, then I deserve to be compensated for some portion of that money.” We’re still working out what exactly “building peaches” entails, but we may still find out. Says Riff: “We’re … looking forward to Spring Breakers Part II.”