No Trivia’s Rap Songs of the Week: 2 Chainz Rides That Daft Punk ‘Get Lucky’ Wave 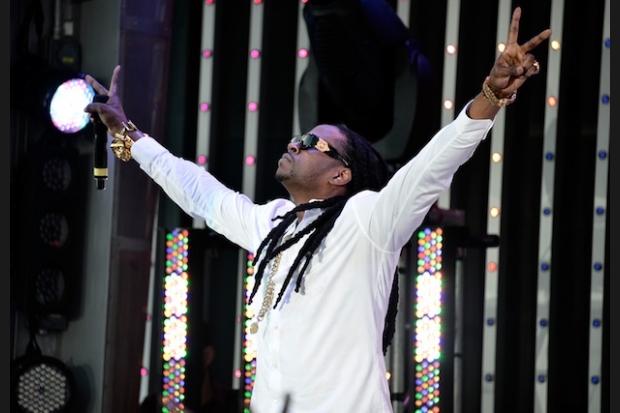 2 Chainz, feat. Pharrell “Feds Watching”
Here’s how a hip-hop hit comes about in 2013. 2 Chainz, ubiquitous rapper, puts out a new single with a little bit of Pharrell in there, because that Pharrell Williams is soooo hawt right now, thanks to Daft Punk’s “Get Lucky.” For real, there’s just no way this wasn’t some not-deserving-of-a-bonus-track chilling out in the vaults somewhere, resurrected just to tap into that “Get Lucky” zeitgeist, right? It would be nice to not have to think of new rap singles as completely calculated moves determined entirely by forces that have nothing to do with hip-hop, but that’s how it works right now. Pharrell’s beat is something else, though. The kind of Glenn Frey-vibing-with-Fabio Frizzi-boat-shoes beat he’s been trying to smuggle into the mainstream for, like, seven years now.

Abdu Ali “Told Em’ (Piggly Wigz)”
B-more Clubbing, ballroom-tinged noise-rapper Abdu Ali wrote this on Soundcloud to accompany his new track, “Told ‘Em (Piggly Wigz)”: “Why do people have to fuck with you? As a little queen king, I had a plethora of situations where little runts messed with me cause I gleam gold, I see octarine, and I didn’t give off that air they use to breathing. But as I got older, I got more buck, and cunt. The annoyance of the streets tested me so many times, it turned me into a damn heathen. A nice one though. Charming, intelligent, and special. Now I have motives, ambitionz of a rider, and I roar throughout the cosmos giving vigilante tease, casting these fake, late baked, box trade bitches down, lyric by lyric, for the rights of all buck cunt king queen bitches across the universe. Feel me? And I ain’t no rebel. Just mad. Watch out for the frogs.” Attention Fade to Mind or, maybe, MISHKA? Get with this guy.

Gangsta Boo “God Of Black”
Here’s a weird story of how old-ass rap of the past comes back into vogue in 2013. Spaceghostpurrp, a Rap Game James Ferraro dirge nerd who obsessively cribbed all his moves from early Three 6 Mafia albums and cassette-hiss, buck-music tapes from DJ Spanish Fly and Tommy Wright, inexplicably becomes a thing when Tumblr leech A$AP Rocky gets ahold of him, and Internet rap is dubbed a thing (“the new underground”) by dopes who write for places like SPIN. As a result, 4AD, home to Grimes and Ariel Pink, hop on board and put this guy’s album out. It’s not very good and doesn’t do so hot, but it affords the people Purrp was jacking (like Hypnotize Minds secret weapon Gangsta Boo), to know who the hell he is and treat one of his beats right, making it clear the Miami weirdo’s got some Mortal Kombat-music-on-Klonopin chops when somebody else is rapping on them. Apparently, Purrp will be involved in the Juicy J-less Three 6 Mafia reunion record, Da Mafia.

Icona Pop “Girlfriend”
This hip-hop-indebted song is nice to luxuriate in while we’re dealing with Miley Cyrus’ Mike Will Made It-doctored, Disney-twerk, booty-club colonialist takeover “We Can’t Stop.” It’s also just a swell rejoinder to the “ride or die chick”-type tracks it references by way of Tupac’s “Me and My Girlfriend” (and Jay-Z and Beyonce’s “Bonnie & Clyde”). As I get a little older and less Byronic, it’s become clear that these kinds of rap songs are not so much moving celebrations of women who hold you down (“holding down” always seems to translate to tolerating cheating and general shitheadedness), but enabler anthems. Sorry to be a wet blanket about it, but it’s true. Here, without making a big deal about their poptimist feminist goals, Icona Pop throw all that nonsense out the window and turn Tupac’s tough-guy codependence into a pure pop ode to friendship.

Kevin Gates “Roaming Around”
This Louisiana lonely boy even gets grandiose beatmakers the J.U.S.T.I.C.E. League to go all maudlin and caught inside themselves. Kevin Gates is one of the most dead-honest about himself rappers around, and here he presents his life as lost and without a center, elevating the typical grind-happy bemoaning of/boasting about being on the corner or in the studio all night, every night, into something more dramatic and compelling. Think the shiftless frustration of the Temptations’ “Papa Was a Rollin’ Stone,” or the temporal ‘tude of Clint Eastwood’s code-less hard-ass, the Man With No Name. Plus, Gates’ foibles, flaws, and fuckups are never balled up into something cool or daring. You always hear a whole bunch of regret in there. Here, specifically, Gates yearns to settle down and finally feel comfortable.