"It shouldn't always take a tragedy" for us to help people 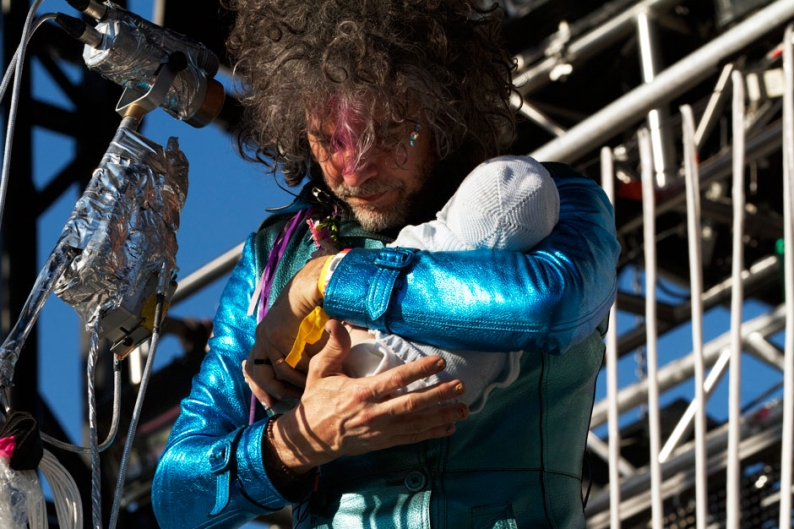 Flaming Lips frontman Wayne Coyne has spoken out on the tornado that killed at least 24 people, including nine children, this week in the suburbs of his hometown Oklahoma City.

Speaking to the Daily Beast from the United Kingdom, where the band was performing behind Essential new album The Terror, Coyne extolled the strength of Oklahoma’s people, reflected on his own experiences living in Tornado Alley, and emphasized the big-picture view that we should be helping each other even when it’s not a time of disaster.

Coyne said he heard about the tragedy while in a London hotel room recovering from the flu, and he was able to confirm that his friends and loved ones were okay. “Even though the city suffered a tragedy, I’m still standing tall and thinking, ‘Yeah. That’s our people,'” Coyne’s quoted as saying. He said his sister lives in Moore, Oklahoma, where the tornado hit, and some of his “really good friends” are also from there.

“There’s a little center of town that’s based along the highway there that’s taken a beating over the years, but in the past five or six years, they’ve really taken to the highway part of it,” Coyne reportedly said of Moore. “I heard that the Warren Theater is one of the places where many of the victims and their families have taken shelter. It’s one of these giant multiplexes where you can drink beer and have dinner while you watch the newest 3-D movie. It’s quite full all the time. You drive by there and can’t believe 600 people are there on a Monday night watching a movie.”

In closing, Coyne described the people of Oklahoma City as “resilient,” but he drew a comparison to the way communities came together after the recent tragedy in Boston, too. “People forget that you could donate $10 to the Red Cross, and that’s all you need to do,” he’s quoted as saying. “If you could do that, that’s a beautiful way to help. But we can always help each other, and it shouldn’t always take a tragedy to make us realize this. If you can’t help the people of Moore, see how the people on your street are doing.”

According to the NME, Coyne began a show at London’s Roundhouse on Tuesday night with 10 minutes of remarks about the Oklahoma tragedy. He reportedly called the show “a ridiculous thing to do” and said that if the tornado had affected anyone in the band or its crew, “we would’ve had no problem with stopping to help them.” But he also said that music in times of disaster “is so important,” joking, “Whenever we cross paths in the future, you can say you were at our most important show ever.”