Guitarist on the birth of the band's latest LP, 'The Devil Put Dinosaurs Here' 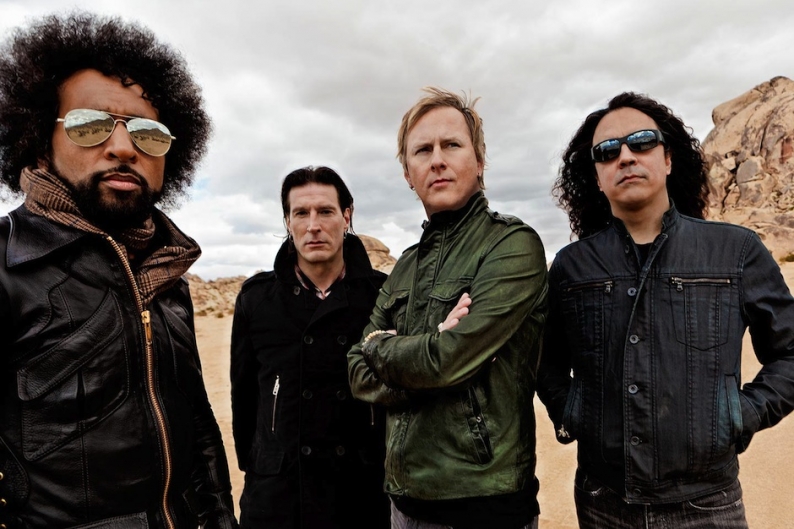 For Jerry Cantrell, talking about the past is beyond old. After all, when his band of a quarter century, Alice in Chains, finally released its fourth LP in 2009, journalists and fans alike seemed more interested in exhuming history than talking about new co-lead singer William DuVall, or the surprisingly energized sound of Black Gives Way to Blue. The gab, of course, was about Layne Staley, the band’s former frontman who died in 2002, and the circuitous and painful path on which their early ’90s Seattle ascendance placed the band.

“A lot of the external questions were put to rest on Black Gives Way to Blue,” says Cantrell. “And with the few internal ones we had, we’d proven to ourselves that we’d done the right thing. We’re really proud, first and foremost, of how we handled ourselves through everything. We didn’t pull any punches. We answered every question. We talked about every painful thing. We did all of that on that first record, facing everything and moving on. We did it with class and style, and we made a damn good record. We’ve always had a saying in this band that when you bet on yourself, you’re going to win. And we’ve always bet on ourselves. We carried that into this record.”

Back then, he endured it, but The Devil Put Dinosaurs Here should divert that chatter entirely: An assured, diverse, heated record with galvanized hooks, aggressive guitar solos, and one lugubrious ballad (“Scapel”) that flickers like a distant candle. DuVall and Cantrell sing well with each other here — no, not like Staley and Cantrell, but like DuVall and Cantrell, two vocalists comfortable trading patient lead lines or settling in to back his counterpart.

For the better part of the next year, the band will be on the road behind these new songs. After that, Cantrell says, they’ll rest and return to the studio — a relatively new quartet with more material left to make. “A really important lesson we’ve learned is to take things one step at a time and enjoy what you are doing now and keep your head in where you are now,” Cantrell explains. “If you’re looking too far down the road or too hard over your shoulder, you’re going to fucking fall down.”

We caught up with Cantrell on a tour stop in Milwaukee, where he explained why he won’t be playing too much off the new record.

Your album isn’t out for two more weeks, but you’re on tour now. How do the new songs fit into the set?
Well, in the old days — if you start out with “in the old days,” you’re totally an old fuck — you were able to play a lot more stuff live. But with the advent of the Internet and sharing and shit going everywhere, you can’t do that anymore. We really haven’t been playing anything off the new record that’s not out yet. We’ve been playing “Hollow” and “Stoned,” and now that it’s going to be released, we’re thinking about whipping out “Phantom Limb” and maybe a few more. We used to play new stuff all of the time. When we were touring Facelift, we probably played half of Dirt on the end of that tour. It’s a cool thing to be able to do, but you hardly have any control over your own music. We’d rather wait until you get the best quality version of what we created before you start getting shitty iPhone versions from crappy gigs.

Does that make you feel more guarded over your music?
You always have to protect your stuff, but it’s something you now have to be way more careful about. Early on, with the demos for Facelift, before it even came out, we were hanging out with the Pantera guys, and Phil Anselmo talked me into giving him a copy back in ’89. He started passing copies around to bands and shit, and then [then-Columbia president] Don Ienner got in my ass for that. It didn’t go that far, though, just to a few bands. If that happens today, it goes everywhere. If somebody turned you on to something back when I was coming up, it was that much more special: “Nobody’s heard this yet. Check this out.” I’m from a different era, and I just haven’t gotten used to it. I don’t necessarily think it’s a healthier situation for music or for people who enjoy music.

But is it flattering that, 25 years into Alice in Chains, people still might want to bootleg the new songs and actually spread the recordings?
It’s flattering that people dig it, but it doesn’t make that situation any better. What bums me out is that some of the creative control in the way that you would like to do things has been taken away. You don’t have a say when your record gets leaked. You don’t have a say in what day everyone can get it. You don’t have a say when somebody gets a demo or records something, what they’re going to do with it. Having a choice taken away from you in the name of convenience or even greater good still doesn’t feel that great. The thing that I dig the most about the making of this music is that we’ve lived the lives that we’ve lived, gone through what we have, and continue to be a vital band that’s pointing forward and not looking back. That’s what I like.

Speaking of the past, do you question your guitar choices more than you used to, or less?
I could probably play more. I’m pretty lazy. I used to play a hell of a lot more, but I’m OK where I’m at. I am what I am, to quote Popeye, and I’m OK with that. I’ve learned that, for me, doing anything too much will burn you out on it. I’m not going to write a song again for a while. This is it. I’ll collect riffs, and little ideas will come. But I don’t want to sit down and write a bunch of songs until we decide to start writing and recording again. You have to put it away for a while. That way, it’s exciting and challenging when you go into it.

What songs made it possible to build this record?
The riff from “Hollow” came about on the last show of that last tour. Sean and I were really sick in Vancouver, and it got worse as we came down the coast and ended in Vegas. I was just feeling horrible, but we were warming up before the show. I stumbled onto that riff. Nick Raskulinecz, our producer, was there and our manager, Beno [David “Beno” Benveniste]. I knew I stumbled onto something when they cocked their heads. Probably the first song demoed was “Voices,” and that demo pretty much resembles what it turned into. I had shoulder surgery that I chose to have to fix some cartilage, and I couldn’t play guitar at that point. The riff for “Stone” was going through my head, but I couldn’t play guitar. So I grabbed my iPhone and sang the riff into it. Luckily what I was humming was in drop D, because that’s exactly where it needs to be played to get that extra low note. Those were the key three songs.

Younger musicians could look at your career and think that perhaps it’s best to go through hell and back, just like Alice in Chains. Do you advise against it?
Everybody goes through hell and back. That’s just living life. The only thing different about being in a band or being in public life is that the lights are brighter and the volume is louder — that’s it.

You said in a 2011 interview that you’ve never been a political band or a band about messages. But the title track here is obviously biting commentary on intolerance.
I don’t know that I’ve ever said we never had a message. What I probably said is that a lot of stuff we say is not completely overt. Even in that song, I think there is a poetry and lyricism and a sense of humor. It’s not a subject we haven’t thought about or written about before — “Man in the Box,” “God Smack,” “Bleed the Freak.” Read the lyrics. It’s not new territory. It’s not a political thing, like railing against the church or a faith. It’s just “What the fuck? Really?” There are some things that don’t work here anymore. Can we incorporate some facts into our belief system? Can we be nicer to each other? Can we accept somebody that believes something different than you, and we can try not to hurt them if they do?

We aren’t we being nicer to each other?
The beauty and the ugliness are together in all of us. We’re human beings. We’re flawed. A lot of how you learn is by making a lot of mistakes. I don’t have an answer. I’m only able to reflect some things of myself and things that I see around me. That is art’s job, to reflect that society back to itself through the lens of an individual. Anyway, I’m getting too highfalutin. It’s a good song.