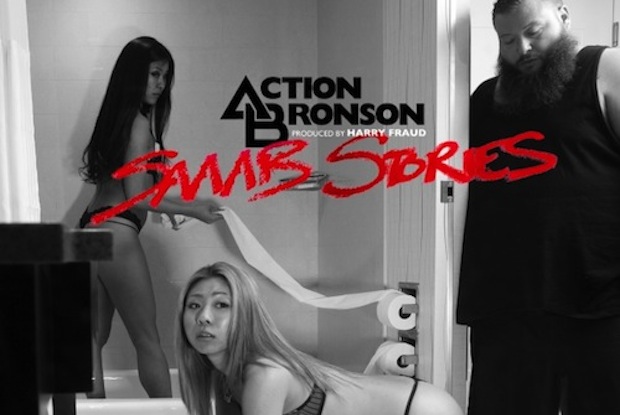 Action Bronson is an awesome rapper who has created for himself an identifiable on-mike character — a guy who is both seedy and high-class, who eats lamb seasoned with fennell as much as he frequents prostitutes. Finding his way to this absurdist character is the main reason why his remarkably illustrative lyrics no longer get tagged as being elaborate homages to Ghostface Killah. But he has a bit of a misogyny problem — though he raps from the perspective of a prostitute on “Hookers at the Point,” the women in his songs very rarely have agency of any sort. That alone doesn’t make him unique in rap, but women aren’t fringe subjects in his music; they play a frequent and important role in his stories, and they’re almost always being used.

Which brings us to the cover of Saaab Stories, his new collaborative album with producer Harry Fraud (HipHopDX). You can see a bit of it above — it depicts two women in a bathroom doing… something. Stuff they probably wouldn’t want to be doing. The cover is a shift for Bronson who has riffed on film visuals for his previous covers, but it’s certainly in line with the persona he’s built as a rapper. One cannot be separated from the other — as is so often the knot with rap music.

The album is out June 11, and features verses from Raekwon, Prodigy and Wiz Khalifa. Tracklist is below: