The multi-talented Emmy Rossum could use a breather. It’s a good thing then, that the Showtime network’s Shameless, on which she plays a dutiful sister holding a family of miscreants together in Chicago, just tied a bow on its third season. Earlier this very busy year the New York City native dropped her second full-length album, the standards collection Sentimental Journey. While back in her hometown, the singer-actress cleared some space in her schedule to chat about her life in music.

What’s your favorite song?
Probably “Part of Your World” from The Little Mermaid because that was the first song I loved as a kid. When I hear it, I try to take it out of the Disney context and just think of the sentiment of the song. It’s a very sweet one.

When you were growing up did your parents object to anything you were listening to?
Spice Girls.

What was wrong with the Spice Girls?
My mom thought it was crap. I was singing in a classical children’s chorus when I was seven so I was exposed to so much classical music at a young age; that’s what I would hear when I came home. My mom was playing these standards from the ’20s to the ’60s and that influenced my listening. So she didn’t like Spice Girls 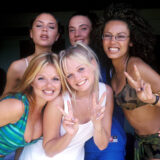 Was 1997’s Spice World the Absolute Best/Worst Movie of All Time?

What song do you associate with your first kiss?
“Wonderwall” by Oasis. The guy I was kissing told me, “I think this song is about drugs” and then we made out.

What was the last concert you went to?
I was at Jay-Z’s Made In America festival last year. I saw Skrillex and he was so awesome. It was so fun, though I thought I was going to be killed by the moshing!

So you got down in there in the madness?
I stayed away mostly. Skrillex had a whole light show going — it was pretty amazing.

Who on the set of Shameless has a musical taste that’s similar to yours?
[Shameless co-star] Justin Chatwin and I both like stuff like Passion Pit and M83. William H. Macy also plays the ukulele on set.

Often?
He has it with him every day, always picking a cute tune over in the corner. The guys who play the drunks in our bar on-set are all musicians too and sometimes they’ll break out guitars and have a jam session with Macy.

Who’s music has helped you over a breakup or through a dark time?
I could be corny and say Celine Dion but it’s really more like David Gray. I used to really like his earlier stuff and its very nostalgic and comforting. I also think food and music can also go hand in hand when nursing a broken heart so, like, grilled cheese and some ice cream, too. Lots of dairy and David Gray.

Do you have a go-to karaoke song?
“Girls Just Want To Have Fun” by Cyndi Lauper. I really can’t mess up the words if I’m drunk. You just sing the chorus and then kind of blah, blah, blah your way through it and you’re golden.