Bowie, Queen, and Gristle tracks with Jello and the gang 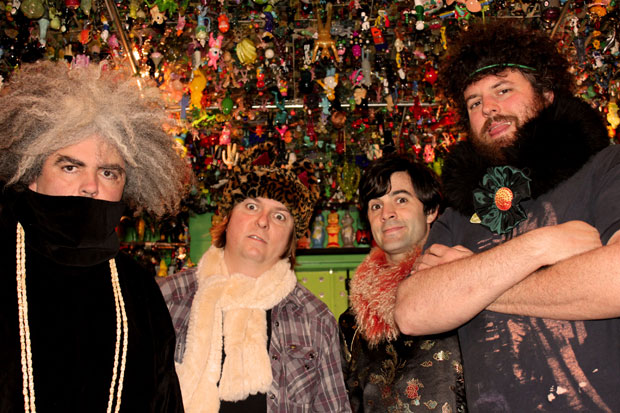 It’s not been long since Washingtonian sludge gods the Melvins dropped an album’s worth of “evil cocktail jazz” (via Freak Puke), and in the time since they did that whole touring 51 states in 51 days thing (which they documented in detail for SPIN every step of the way), but Kurt Cobain’s favorite band have found the time to prepare an entire album’s worth of cover songs packed with exceptional guest performers.

Everybody Loves Sausage will be out on April 30 via Mike Patton’s Ipecac imprint, and will feature King Buzzo-approved takes on everybody from David Bowie and Queen to the Fugs and the Jam to Throbbing Gristle and Divine (a.k.a. John Waters’ drag queen muse, Harris Glenn Milstead). Said Mr. Osborne via statement: “We REALLY like all of these songs along with the bands who actually wrote this stuff because first and foremost we are HUGE music fans.”

Second and rad-most, they’ve press-ganged a number of diversely résuméd musicians to assist. Neurosis growler Scott Kelly stops by for Venom song “Warhead.” Mudhoney’s Mark Arm shows up for the Scientists’ “Set it on Fire.” Jello Biafra joins for Roxy Music’s “In Every Dream Home a Heartache.” Drummer Clem Burke of Blondie (!) appears on “Attitude” by the Kinks. The Melvins Lite lineup appears on a few tracks as well.