This Is What Counts as a Photo of David Bowie Now 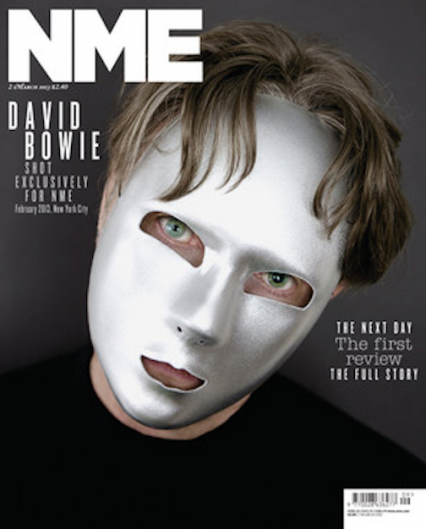 David Bowie is on the cover of U.K. music magazine NME this week. What, you didn’t recognize him? The glam-rock godhead, who last night shared the Tilda Swinton-starring video for his latest The Next Day single “The Stars (Are Out Tonight),” is reportedly behind that white, hockey-style mask.

NME editor Mike Williams, like former President George W. Bush gazing into Vladimir Putin’s eyes, can recognize Bowie’s soul peering through. “Staring out from behind the mask are the unmistakable eyes of David Bowie,” Williams is quoted as saying. “The shot, taken by his friend Jimmy King exclusively for NME on February 11 in New York, landed in my inbox the next day with a message from Bowie’s people: ‘This is just for you. No one else has seen this. David would like to be on the cover.'” Um. Okay then?

The Next Day, Bowie’s first full-length since 2003’s Reality and one of SPIN’s 50 Albums You Gotta Hear in 2013, will be out on March 12. Plenty of time for us all to “orchestrate” our own almost-identical David Bowie photographs. Slipknot, you guys go first.