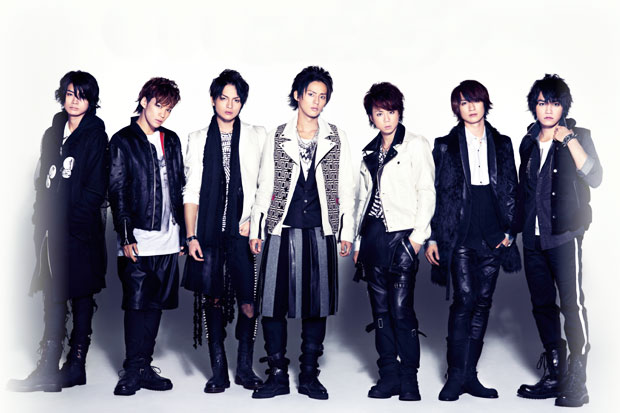 The top slot of the Oriconchart, the primary ranking system for music sales in Japan, is currently occupied by “Ai No Beat” the latest single from the boy band Kis-My-Ft2, whose name is cobbled together as an acronym from the transliterated initials of its seven members and then poorly approximated as “Kiss My Foot Two.” At first blush it feels like deliberately trashy dance-pop — especially with a melody seemingly cribbed straight from Cobra Starship’s “You Make Me Feel…” — but it’s a little more complex. The verses are handed off across the seven-member cast, Beasties-style, effectively one-note parts with minor-third embellishments; the chorus has the whole group working in unison to deliver soaring lines about dancing happily and reaching for the stars. And the marketing strategy has contrasts too. “Ai No Beat” was released in two formats: First is the dance version that’s holding strong at No. 1

But there’s also a guitar-heavy “rock version” which isn’t currently charting at all.

Remixes are obviously as important as primary releases to the dance music world, but we’ve also seen this trick before in more mainstream markets. For example, Taylor Swift has been known to drop her singles with simultaneous alternate “pop mix” versions meant to hit harder on mainstream radio (“Love Story” criminally abandoned the banjo part for palm-muted guitars), and some of us might even look back fondly on Cypress Hill drafting members of the Deftones to help them turn the Skull & Bones lead single “(Rap) Superstar” into its alternate “(Rock) Superstar” version way back in 2000. But each of those examples also works as a whole, whereas in the case of “Ai No Beat,” the dual release format makes a lot of sense precisely because the composition almost seems to have been built from the ground up for this express purpose — each version focuses on one part of the song, at the expense of the rest.

Which is not to say anybody’s any better off as a result — the median age of the band members is a crisp 21 years, and consequently the rock version sounds like a hazy reflection of rock as understood by someone who grew up in the age of Shinedown: dramatic pauses, fluttering echoes and filters, doubletracking everything to death even when the riffs don’t actually want to go anywhere useful. In fact, if you close your eyes the verses could almost pass for Linkin Park, either on one of their regular records or in the Shinoda/Hahn pseudo-experimental tweakhead mode, depending on which version you’re listening to. The dance version is the clear winner here, mostly because of that chorus — there’s a reason why Linkin Park didn’t try anything in a major key until they were three multiplatinum albums deep.