“I was cocky,” Kurt Vile says with a laugh. “I didn’t think it’d happen: I had a week in the studio booked, didn’t think the baby would come early. She came a week early.” Vile is currently prowling the leafy length of Bainbridge Street in his native Philadelphia, en route with his band, the Violators, to procure a fresh set of amp tubes for afternoon rehearsals. In two days, they’ll head to New York to provide opening support for Dinosaur Jr., the legendary trio whose longtime producer, John Agnello, has returned to Vile’s side for the recording of his full-length follow-up to 2011’s breakout effort, Smoke Ring for My Halo, an album they tracked together at J Mascis’ home studio in Amherst, Massachussetts. Two months ago, the completion of said follow-up, due tentatively in spring 2013, was postponed when Vile and his wife welcomed their second child into the world just hours into the mixing and mastering process in Brooklyn. “It brings you back to earth,” he says of his daughter’s arrival.

But much of the album’s formation was scheduled with the baby in mind. “I was on a time crunch,” he says. “With the last record, because I also had a kid in between, I knew how it went and that I had to plan. So that’s what I did: went on tour, got super tight, finished all these songs writing in my hotel room every night.” And working around a pair of lengthy U.S. and European tours this past summer, Vile scheduled sessions in upstate New York in May, Los Angeles in August, and Philadelphia in September, to capture a wealth of road-born songwriting he says he’d like to release as a double album when the time comes next year.

“It’s me,” he says of the still-untitled effort, his third full-length for Matador. “You turn it on and it sounds like me. But the guitar playing is better and the ideas are new. It’s classic, it’s epic, with many more solos. When I first signed [to Matador], I couldn’t imagine writing on the road. And for a while I had a writing block because I wasn’t used to it. But it’s all about jamming on guitar in soundcheck and I just tapped into that. I was constantly writing songs, but slowly. I would take my time, just seeking out nuances. I would work on a strummer for a long while, keep working on a single riff. It’s really obsessive, but there’s more electricity.”

And in addition to an approach he says is more overtly rock-informed than previous work (“When it’s classic rock-y, it’s really classic rock-y”), Vile says time spent with Hotel California — journalist Barney Hoskyns’ behind-the-scenes look at Laurel Canyon in the 1970s — prompted him to book studio time in Southern California and reach out to local friends: Farmer Dave Scher of Beachwood Sparks and drummer Stella Mozgawa of Warpaint, both of whom contributed to the record. “I just wanted to catch those cosmic vibes, circa 2012,” he says of the L.A. sessions. Vile also invited Royal Trux’s Jennifer Herrema to guest as a vocalist and Woods frontman Jeremy Earl as a percussionist, and enlisted former Violator Michael Johnson and harpist Mary Lattimore. “It’s so many hours of sessions,” he says, now settling into band practice. “It’s totally our Tusk, but no cheese. Just rock.” 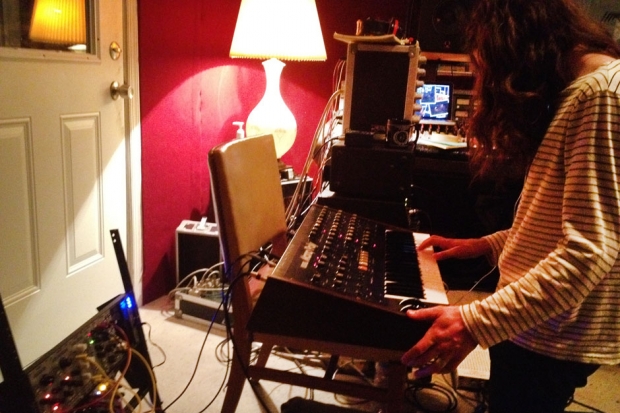 In The Studio, kurt vile