Amid the flurry of 50th anniversary-spawned Rolling Stones movie news, Mick Jagger has signed on to produce a long-in-development James Brown biopic. According to Deadline, the Stones frontman will help Brian Grazer bring the Godfather of Soul’s life story to the silver screen with a screenplay by Jez Butterworth and John-Henry Butterworth, who wrote 2010’s Fair Game. The Help’s Oscar-nominated director Tate Taylor is in talks to helm the untitled film.

“It’s a great honor to be involved with a project as rich as the story of the legendary James Brown,” Jagger said. “He was a mesmerizing performer with a fascinating life.”

Jagger’s Jagged Films and Grazer’s Imagine Entertainment will share production credits on the picture. The story will follow Brown’s rise from poverty-stricken youth to Soul Brother Number One. The producers are now seeking a distribution deal and a lead actor to play Brown. The late singer himself was involved in the project before his death in 2006, and his family will continue to be a part of the motion picture portrayal.

“I am deeply honored that Mick Jagger and Brian Grazer, two of my husband James Brown’s favorite people, have entered into a partnership to bring his inspirational story to the big screen,” said Brown’s widow, Tommie Rae Brown. 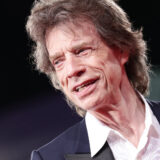 Grazer was previously reported to be working with director Spike Lee on a Brown feature film. That project was rumored to be close to casting either Chris Brown, Usher, or Eddie Murphy in the lead role. Murphy famously spoofed the singer during his residency on Saturday Night Live. He told BlackTree TV in March: “There’s the most incredible script that Spike Lee worked on that’s James Brown. That’s incredible. It has everything in it, but you have to get with the people who have the rights to James’ story.”

Now incarcerated, Wesley Snipes was also once eyed for the role, Rolling Stone reports. In that iteration, the musical numbers would have dubbed the legendary performer’s vocals over Snipes’ performance.

A literary biography of Brown, The One: The Life and Music of James Brown, written by RJ Smith, was published earlier this year. SPIN wrote that Smith “tells the stories that J.B. himself couldn’t or wouldn’t, debunks a handful of the tall tales that arose around him, and makes the scope of the Godfather’s achievement clear.”