Hova discusses the effect of grunge in Pharrell's new book, 'The Places and Spaces I've Been' 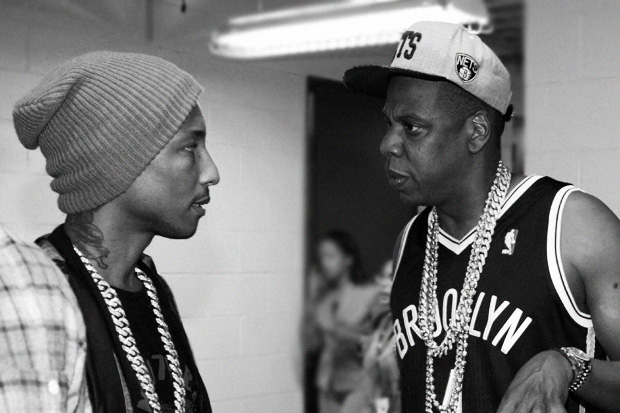 In his upcoming coffee-table book Pharrell: The Places and Spaces I’ve Been (Rizzoli), human hyphenate Pharrell Williams includes interviews between him and notables ranging from Buzz Aldrin to Kanye West to Anna Wintour to Jay-Z. For the most part, they’re of the tell-me-how-you-do-what-you-do variety, but the back-and-forth between producer-designer-rapper Williams and Jay-Z quickly reaches Nirvana. Literally.

“So, where were you mentally and physically when grunge music hit?” Pharrell asks Jay-Z. “Like where were you when you first heard, ‘Smells Like Teen Spirit?'”

Coincidentally, Hova was in Pharrell’s home state of Virgina when he heard the generation-defining song for the first time. But he’s more interested in discussing why the song hit so hard than where he was when it got going. “First we got to go back to before grunge and why grunge happened,” reasons Jay. “‘Hair bands’ dominated the airwaves and rock became more about looks than about actual substance and what it stood for—the rebellious spirit of youth….That’s why ‘Teen Spirit’ rang so loud because it was right on point with how everyone felt, you know what I’m saying?”

Jay-Z then goes on to say that grunge actually stalled the rise of hip-hop in popular culture. “It was weird because hip-hop was becoming this force, then grunge music stopped it for one second, ya know?” he says. “Those ‘hair bands’ were too easy for us to take out; when Kurt Cobain came with that statement it was like, ‘We got to wait awhile.'”

Next, Pharrell mentions that he used to see Jay-Z in his old Virginia stomping ground of Newport News, but Jay-Z is still focused on the Kurt tip. “I have always been a person who was curious about the music and when those forces come on the scene, they are inescapable,” Jay says. “Can’t take your eyes off them, can’t stop listening to them. [Cobain] was one of those figures. I knew we had to wait for a second before we became that dominant force in music.” From there, the conversation moves on to ’90s hip-hop, the death of the Notorious B.I.G., and what makes a great record. It’s not a bad attention-grabber for an opening chapter.

Pharrell: The Places and Spaces I’ve Been is out October 16.