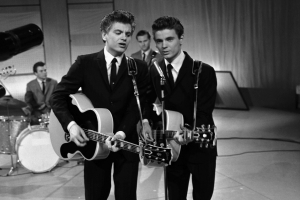 Don and Phil Everly scored a No. 2 hit in 1957 with their second release, “Bye Bye Love.” With a strum and a warm coo, the pair began a winning streak of early rock-era country crossover breakthroughs that emphasized their near-telepathic vocal harmonies and sparsely textured guitar interplay. The influence of songs like “All I Have to Do is Dream” and “Cathy’s Clown” appear in the vocal work of the Beatles, Simon and Garfunkel, R.E.M., and of course, Animal Collective.

Avey Tare: Songs like “It Only Costs a Dime.” I always like the way their voices blend and mash together so well. It’s always been something we’re shooting for during the recording process, just trying to get the voices to blend that way. It’s just the way that their voices match. It’s that one unified sound, to me, and you don’t think of it so much. Same thing with the Louvin Brothers, you know? Satan Is Real or something like that. You don’t think of it as two people singing, it just becomes one sound.