PINK FLOYD – ‘THE PIPER AT THE GATES OF DAWN’

PINK FLOYD - 'THE PIPER AT THE GATES OF DAWN' 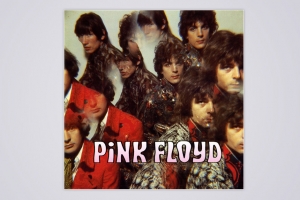 The Floyd’s first album, released in 1967 when they were still fronted by Syd Barrett, is also their most whimsical, mixing dark star freak-outs with playful, faux-naïve lyrics and pop songcraft. The exploratory primitivism of “Astronomy Domine” and high-minded improvisations of “Interstellar Overdrive” carved out a cultural space where childlike wonder and gape-jawed exploration could comfortably co-exist on the same “pop” record.

Geologist: When we were freshman in high school there was a guy who taught music to kindergartners and he was a big Deadhead and he started being like, “If you bring me in blank tapes, I’ll dub my favorite bootlegs.” And something came up about Pink Floyd once, and he was the first one to tell us “You should not just listen to Dark Side.” Something like “Interstellar Overdrive” we still use as reference. This idea of you start at one place and then you build to something and then you don’t know where it’s gonna go and then it breaks apart and then you need to find your way back. Just that basic structure of that song blew our minds.”