Maynard James Keenan can add a new job to his already hefty résumé. As Blabbermouth points out, the frontman for Tool, A Perfect Circle, and Puscifer is now a biweekly columnist for the Phoenix New Times’ Up on the Sun blog. In his debut, Keenan wastes little time beating us full-time internet typists at our own lowly game.

After a droll introduction comparing himself to Bill Griffith’s brilliantly out-there comic character Zippy the Pinhead (whose jokes we could never understand as kids) and downplaying this columnist gig as a mere honey-do, Keenan updates us on his winemaking business. It’s coming in ahead of schedule, thank you. But his neighbors Tim and Todd are beating their usual pace, too. And Keenan’s freezer is bereft of Dairy Queen-branded treats. These, he determines, are Signs.

“Based on my clearly tireless and thorough research stretched over tens of minutes, I have come to the following daunting conclusion and well thought out suggestion,” Keenan writes. “These are in fact the ‘End Of Days’ and people need to know about it As Soon As Possible! Obviously the only rational thing to do is to clear out all of your bank accounts and send me a cashier’s check for the full amount.”

So there you have it. We’re sure Keenan would also recommend spending any remaining savings — perhaps hidden under your bed? — on ample cases of the latest vintages from Caduceus Cellars, Merkin Vineyards, and Arizona Stronghold Vineyards. Though he only co-owns the last one, so maybe buy half as much from them. 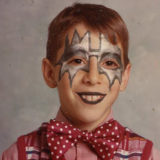 And if the ol’ Mayan calendar really is gonna wipe us out, as this self-proclaimed “Chicken Little” suggests, you’ll still have at least one more chance to see Keenan. After touring this year in support of Puscifer’s sophomore album Conditions of My Parole, he’ll be reuniting with A Perfect Circle for a show on December 29 at the Planet Hollywood in Las Vegas, which, well, if you’re gonna die anyway…

But wait! On the extreme off chance we all survive 2012 unscathed, sort of the way we did when our computers were supposed to crash the universe at the dawning of the new millennium, A Perfect Circle have one other gig scheduled: the Soundwave Festival in Brisbane, Australia, which kicks off February 23. Zippy the Pinhead’ll see you then. Maybe.