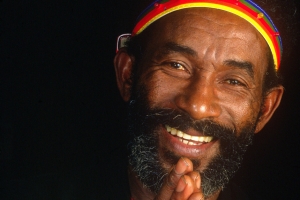 The Upsetter is a pied piper for weirdness, that rare artist whose obvious madness exists in perfect harmony with his uncanny ability. In the ’60s, he practically invented dub by hotwiring a mixing board. In the ’70s, he produced Bob Marley’s best stuff, then did a ton of acid and burned his studio to the ground. Today, he’s like a Jamaican Yoda, a musical Jedi master with a foreign croak whose physical stature shrinking in inverse proportion to his broadening influence. We suspect he may be immortal.”