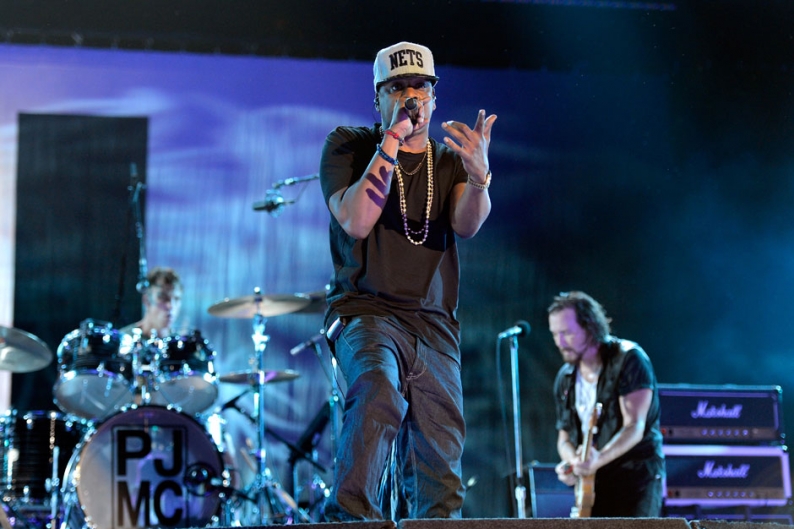 This past weekend in Philadelphia, Pearl Jam and Jay-Z joined forces onstage at the latter’s Made In America festival for a rousing rendition of 2004 Black Album single “99 Problems,” a tight-fisted collaboration the Seattle alt-rock survivors’ bassist, Jeff Ament, says took shape at the eleventh hour. “We had been talking about it loosely,” Ament says of marrying a song of theirs (lyrically connected, long-forgotten protest cut, “W.M.A.,” from 1993’s Vs.) to one penned by their co-headliner that night. “Ed [Vedder] had a conversation with Jay-Z maybe a month ago, so we knew it was a possibility and started doing the work on our end, mashing up one of our songs with one with one of his because groove-wise, we thought it would work. But we didn’t really know until a half hour before the show, when he came back and played it with us, that we were going to do it. And within 30 seconds, we knew it was going to be good. And I think he knew it was going to be good, too.”

Ament — in New York for a few days to meet with his bandmates in recently announced trio RNDM, singer-songwriter Joseph Arthur and Fastbacks drummer Richard Stuverud — says it’s a situation Pearl Jam has found themselves in a few times over the years. “[Jane’s Addiction frontman] Perry Farrell came back 15 minutes before our ACL set just to say ‘hey’ and someone said, ‘You wanna get up and play something with us?’ And he was like, ‘You know any Jane’s songs?’ And we knew ‘Mountain Song’ — [Pearl Jam guitarist] Stone [Gossard] and I can play the shit out of that song. But like that, this was one of those things where we played it super quietly backstage before we went on. There’s that element of excitement. You’re excited because you’re anxious. It’s 50,000 people and we hadn’t played it at full-volume together.”

To guide them through the song, the band (who had also collaborated with Cypress Hill on 1993’s Judgment Night soundtrack) had maps of the live arrangement laid out in front of them onstage. “Matt [Cameron] absolutely killed it,” Ament says. “[’99 Problems’] sounds like a really simple song, but there are a lot of holes in it and Matt nailed all of those. Someone also showed me a quick two-minute clip of everything afterwards and I was really happy with the lighting, too.”

Though Ament, a former varsity basketball player at the University of Montana in Missoula, picked the rapper and part owner of the Brooklyn Nets’ brain about the upcoming NBA season, they wouldn’t see each other again after the performance. “It’s the first time I’ve been that close to somebody who really, really raps,” says Ament. “Just to see his body while we were playing: it basically becomes a metronome. You see him stretching things out over notes, bringing it back in. It was really cool. His eyes were closed the whole time. It’s all rhythm.”

Ament says the festival itself was a pleasant surprise. “We didn’t really know what we were getting into,” he explains. “Usually, with festivals, we have some say about what the sound system is and what the lighting rig is, but not so much this time — we really went into their world. [Jay-Z] originally approached us maybe four months ago and he didn’t really have any other bands in mind yet so we said, ‘Hey, come back to us when you have more of an idea of what you’re going to do.’ But as soon as I heard Santigold and Odd Future were on the bill, I was in. And the whole thing was so awesome and so together. I had a few friends who came and they said it was absolutely incredible from a fan perspective.”