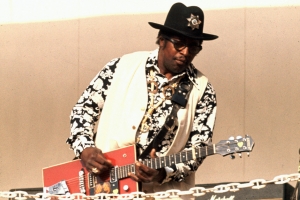 The bluesiest of rock’n’roll’s pioneers taught ’60s British Invaders about the R in R&B, stripping away chord changes to accentuate his durable, variable “shave and a haircut” pulse. A visionary of guitar tone, Bo selected his custom-made axes — most notably that “cigar box” Gretsch — with as much an ear for their sonic potential as an eye for aesthetics, and he was among the first rockers to build his own home recording studio.

Avey Tare: In terms of thinking about recording and presenting music, Bo Diddley has influenced me more in a recording standpoint. I feel like over the years we’ll be in studios and there will be books about classic studios and classic styles of recordings. And it was definitely a thought that came into my mind when we started recording Merriweather, but even more so with [Centipede Hz]. Back then, dudes just recorded music like together with one microphone. Just set it up, It was all about finding the perfect room, leveling the instruments and just ripping. Just capturing the energy. I love Bo Diddley’s records. The way all the instruments blend together, some of the songs have this weird trance element. Trying to capture some live, raw energy is something we definitely talked a lot about.