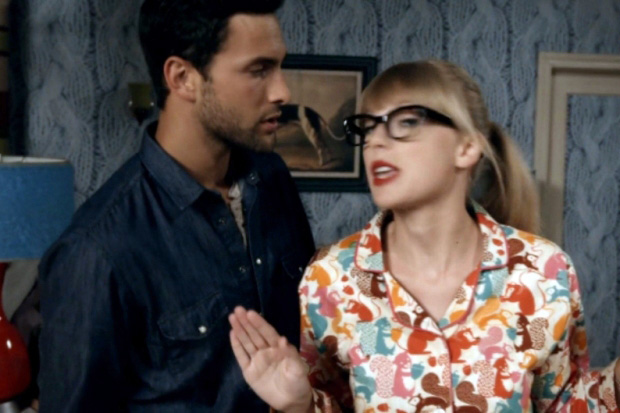 For Taylor Swift, the 18th time is the charm. The potential next Pitbull told MTV that’s how many tries it took to pull off the playful and endearing new video for her current chart-topping, record-breaking single, Max Martin co-produced breakup anthem “We Are Never Ever Getting Back Together.” And it’s easy to see why she needed so many mulligans: Directed by previous collaborator Declan Whitebloom, the clip is “all in one take, shot with one camera, 5 costume changes, and woodland creatures,” as Swift said on Twitter yesterday.

Persistence, as it happens, is a theme of the song and video, too. Swift surely knows the Adam Levine lookalike who plays her clingy ex will lead to some more sales-greasing publicity ahead of the October 22 release of her upcoming album Red — OMG was she secretly dating the Maroon 5 frontman? — though it’s hard to believe the actual The Voice judge who sings “Payphone” would listen to “some indie record that’s much cooler than mine.” Neatly suiting advance descriptions of the album, which reportedly includes dubsteppy bass and takes some “incredible risks,” the video is ridiculously fantastical. Those woodland critters? They’re Swift’s backing band.

The Levine-alike might want to find someone new to tell he needs “space” (Swift’s own wonderful air quotes), but this pop singer’s journey from pajamas to a lonesome window ledge looks to have been worth the effort. Sure, there’s nothing especially sweet about 18 — or 22, Swift’s actual age — but it means you can make your own decisions.