At the same time, a newly minted British millionaire is trying to reunite the original crew 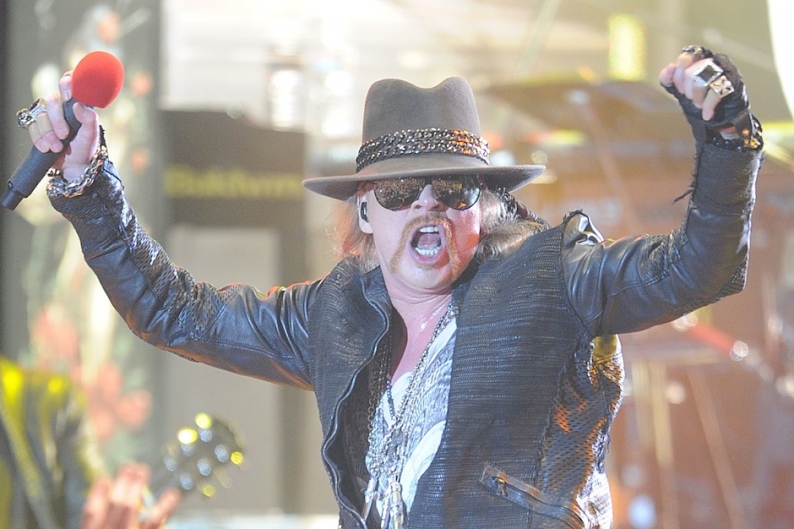 Shortly before Thanksgiving 2010, Guns N’ Roses leader Axl Rose slapped a $20 million lawsuit on Activision, makers of the now-discontinued video-game franchise Guitar Hero. In the suit, he alleged that the company used their collusion to dupe him into licensing “Welcome to the Jungle” to Guitar Hero III: Legends of Rock under the premise that songs by Velvet Revolver — the band featuring former GN’R members, notably Slash, whom Rose seems to particularly detest — would not be used. When it was released in October 2007, the game included several songs by the band, used an image of Slash on its packaging, and included the guitar hero as a playable Guitar Hero avatar, so Rose filed the suit claiming he was defrauded and that Activision breached contract. The fact that Rose’s lawsuit came three years after the game’s release raised eyebrows.

Yesterday, a Los Angeles judge dismissed Rose’s fraud’s claim, according the Hollywood Reporter, but will continue to assess the singer’s breach-of-comment claim, which could lead to a potential trial in February. Rose’s attorney was quoted as saying the whole situation could become “very interesting” and underscored that he and his client had discovered that “Activision had been intentionally concealing its plans to use [Velvet Revolver] and Slash in the game all along.” Nevertheless, because Rose waited so long to file the suit — allegedly because the company offered Rose “a separate video game and other business proposals worth millions of dollars,” in his words — the statute of limitations has run out.

Activision claims it had made its negotiations with GNR Music, which administers rights to the group’s songs, and that Rose had no right to license “Jungle” individually, since he doesn’t solely own the song or its recording. Nevertheless, the judge may be willing to hear Rose’s side of the story.

In lighter news, Blabbermouth reports that a U.K. GN’R fan, who recently won $232 million in a lottery, would like to use some of the money to convince Rose and Slash to mend fences. “I think I would just have to get Guns N’ Roses together,” 41-year-old winner Adrian Bayford reportedly told the Brit tabloid the Sun, clarifying, “the original lineup, mind [you]. I’m a real fan.”

Blabbermouth reminds us though that in May, Slash said told CNN’s Piers Morgan that money isn’t much of an incentive to reunite. “I don’t think it’s a matter of that; it really isn’t,” he said. “I think you’ve got a situation where nobody involved wants to revisit. It’s not just me — it’s the whole band.” Of the amounts he’d been offered to reunite, Slash said, “I’ve heard a lot of numbers, but I’ve never been handed a specific offer. But I’d say it starts off with seven figures and then sometimes it starts to get even more grandiose than that.” It doesn’t sound “grandiose” is a problem for Bayford, though.

But if that doesn’t pan out, there’s always the opportunity to see Guns N’ Roses — in its current lineup — play Las Vegas this fall. And, hey, if Axl won’t do a reunion, we’re pretty sure Carrie Underwood, who was recently caught on camera singing “Sweet Child O’ Mine” (viewable below), or any of the cover artists here would be happy to step in.