'Keys to the Kuffs,' his new collabo with Jneiro Jarel, out August 20 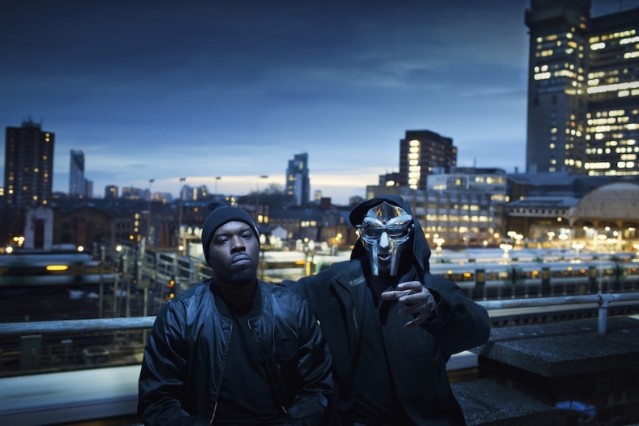 The rapper formerly known as MF Doom is holed up with a pint in a pub in London. The elusive MC/producer is coy about his exact location — “There’s two ambulances across from me now,” is all he’ll give up — but it seems the foggy British air is working wonders on his music. His latest album, Key to the Kuffs, credited to JJ Doom, was recorded in tandem with New Orleans-based producer Jneiro Jarel (best known for his 2009 Georgiavania long-player with Goodie Mob member Khujo), but there’s a marked Anglophile infusion to this new project. Guest vocals come from Daman Albarn and Portishead’s sourpuss Beth Gibbons, soundbites have been grabbed from British TV shows, and when he raps, Doom is quick to attempt East End cockney slang like “guv’nor” (although he’s always been fond of weaving a bit of ye olde English into his rap vernacular).

Having lived in London for a couple of years now, Doom has allowed the city’s sometimes dour patina and smoggy weather infuse his music — and it’s created a vibe that suits his rap persona. As Key to the Kuffs unravels, he starts to come off as an endearingly grumpy old man, grumbling about sanitary issues in night-clubs (“Wash Your Hands”) and airing out worldly but possibly-far-fetched conspiracy theories (“Winter Blues”). It’s as if Doom and his impressive beer belly (the super-villian has been known to enjoy a few brews now and again) is holding court in the rap game while glued to a barstool in some musty pub. And it’s a set-up that seems to suit Doom just fine.

How’s life in London?
It’s not bad, there’s some beautiful weather today for once. It’s laid back.

How long have you been over in London?
There’s no telling. It seems like forever, but maybe like two or three years now, straight. I’ve been everywhere, but most of all I’ve been in London, that’s been my constant.

Do you remember anything at all about being in London as a kid?
No. I was too young to comprehend so it may have been hearsay. That’s Doom’s official answer.

Growing up, do you recall hearing or seeing any examples of British pop culture in your parents’ house?
Hmmm, neither one of them are from Great Britain, so I think no, but when I think about music as a child it seems to be world music, like Stevie Wonder. There’s no border really — to me the borders are manmade shit. Right now, I’m out here and I’m a New York nigga, straight up, but I’m in London.

Was there one song you remember your parents playing that you became obsessed with?
Stevie Wonder’s “Superstition” sticks in my mind. I guess at the time that record came out I was young but came to comprehend it

Have you ever sampled Stevie Wonder?
[Affects Spanish accent] No speakey the English!

What did your parents think when you started to play hip-hop music in the house?
Yeah, well, my parents were separated so it was my moms and she didn’t like it — she was adamantly against it. You get that though. It wasn’t encouraged. It was a generation gap kinda thing. Now, I think she appreciates it.

Were there any hip-hop songs you couldn’t play in front of your mom and had to play in secret?
Yeah, my moms would curse me out. For her, our [K.M.D.] shit that was the worst shit. I could play [Boogie Down Productions’] Criminal Minded in the house and I won’t hear nothing, but I throw on one of the beats we were making even without vocals on it and she’d tell me to take it off.

What did she yell at you?
It was the experimental type language that it’s too graphic to say in the interview. But she didn’t even hear the lyrics! It was a mother/son connection, it was kinda weird. Our shit was the worst shit to her.

Did she ever give you any constructive feedback on those early songs?
No. Only now does she be like, “Hey Doom” — she calls me Doom by the way — so I’ll get a text like, “Doom, you know that song you wrote?” She’s more encouraging now. It’s better late than never, you know, fuck it.

I was at Nas’ pool party. That shit was dope. I even brought a present —DOOM

On the new album you have a song, “Winter Blues,” where you reference Henrietta Lacks. Did you read the book?
I’m familiar with the story, but I haven’t read the book.

What was your first reaction to it?
My first reaction, as a scientist, was interesting, like I want to hear more. I didn’t react emotionally; I was like, interesting, what else happened? It’s an incredible story how her cells was used after she passed on — they were used to study how cells work in a nutshell and how to cure shit and certain things. To use it as a basic example, it was a reality that was unique enough to be used as a basic sample, which means that she’s still alive theoretically. There’s hundreds of thousands of her cells in laboratories all over the world and they’re still using them to figure out how to cure things and study things. I’m no biologist like that — I’m like a self-taught motherfucker — but all that kinda thing is interesting to me.

Would Doom ever donate his cells to medical research?
Hell nah! I ain’t giving my shit to no motherfucker! You know how much you have to pay? I ain’t having nothing given away. My shit is too expensive! Hell nah, I’m not doing that for no amount of money. Can’t get this nowhere, this is real shit!

On “Banished” you refer to a situation where you were denied entry back to the United States after being overseas. How did that feel?
It felt great! Exhilarating!

What happened?
I was just back and forth. It was this Russian bitch kicked me out too. [Takes on a Russian accent] “You are never again here.” I was like, oh, shit, it’s real? Whatever though, it’s just whatever. I ain’t gonna talk too much about that.

If Doom found himself as president of the United States, what would his first act in office be?
No more presidents! How about no more governments! The whole shit is over. I would never even consider that — Doom would fuck the whole shit up: Okay, everyone is fired, there’s no more government, let’s have free will, everybody live off the land. That’s what would happen if they slipped up and accidentally elected that motherfucker.

What was the thinking behind the song “Wash Your Hands”?
So the character Doom, everyone knows he’s a little bit exaggerated, if I may say that. So he kinda looks at everything from a different view, like the whole sexual motion and the instincts in hip-hop. He’s too cold; he got to the party and all he notices is these little things that are unhygienic. He’s now a party popper, ’cause he’s still at the party, but he’ll go to the strip club and he’ll bring his own mug.

If Doom had a club, what would he do to keep it hygienic?
Whoa, man, I seen so many things. [Pauses] Man, it’s like oxygen that’s recycled. People are breathing back in the same air so they need oxygen filters. Instead of spending money on bullshit security they don’t need, it’s like the air that people are breathing on airplanes, it’s such a simple solution. That’s just one I thought of. I don’t cough, I take off, I cough, and then it’s like why am I coughing? You should be able to breath the air above the sea, not the air that’s regenerated in the plane. That’s really unhygienic. There’s a lot of real things like that but I won’t go too far into it.

On “Wash Your Hands,” you also mention going to a pool party. What’s the best pool party Doom’s ever been to?
Ah, man, okay, I was at Nas’ pool party. That shit was dope. It was the day after, like it was still going on, so a real private thing.

What was Nas’ pool party like?
It was dope, just like the day after the party when the party goes into another day. I was late — I had my girl or whatever, you know how the Villain works — but that was the flyest pool party. That shit was cool. I even brought a present, a painting I made, and just snuck it in there, put it up. [Pauses] That might be the only pool party I ever been to.

Madvillainy at 15: MF Doom on the Legacy of His Classic Madlib Collaboration