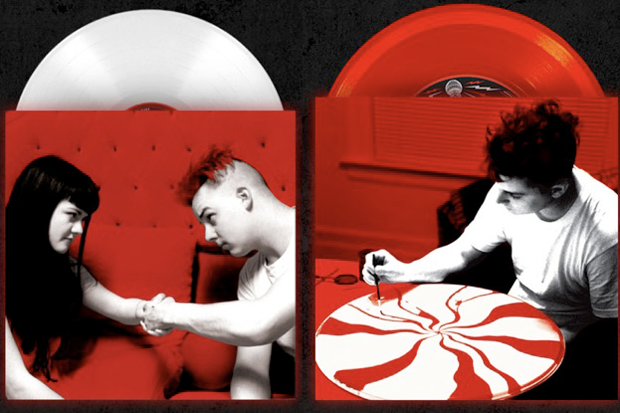 In what seems to be an attempt to prove to heartbroken fans that he really is sad about having to end the White Stripes, Jack White and Third Man Records have announced that the next batch of goodies its Vault subscribers will receive includes a 12″ recording of the Stripes’ first-ever live show. Yes, that would be the set performed and recorded at Detroit’s now-closed Gold Dollar club on August 14, 1997, exactly 15 years ago next month.

Consequence of Sound reports that Vault Package #13 will include the 12″ white (obviously) vinyl recording of the Detroit duo’s first live show, in addition to a 7-inch (also obviously) red vinyl recording from an even earlier performance at an open mic, also held at the Gold Dollar on July 14, 1997, exactly a month before the official debut show. No word as to the quality of the recordings, but knowing Jack White, they’ll be as pristine as the club’s PA system allowed. The package will also include a double-sided tote bag printed with the peppermint White Stripes logo Jack designed and painted himself. If this was the tipping point for your decision to subscribe to the Vault, you’ll have until the end of the month, July 31, to subscribe and buy the (soon to be quite valuable) package.

Modeled after the Sub Pop Singles Club that flourished and was responsible for the Seattle label’s early reputation in the late ’80s and early ’90s, Third Man Records’ Vault launched in 2009 and has since issued 12 other packages like this, which have included everything from triple-LP compilations of Third Man singles to limited-edition T-shirts to White Stripes outtake 7-inches.

Incidentally, the White Stripes played at least one other show at the Gold Dollar in 1999, two years after their first-ever performance and two years before the place shut its doors. Watch that entire 28-minute set below and try not to shed too many tears over the Stripes’ etched-in-VHS grave — it’ll be hard when White squeaks his way through a cover of “Jolene”: