Odd Future have sparked a sea change in young style 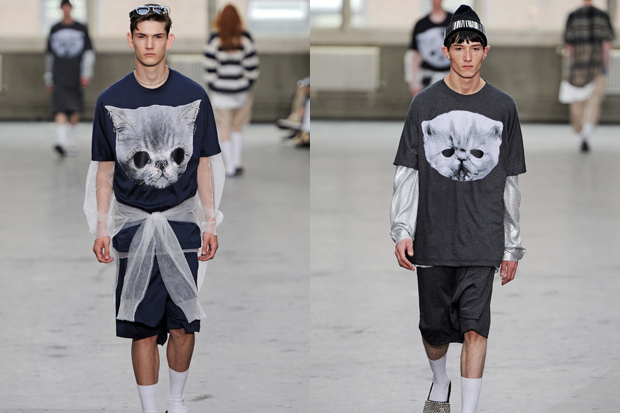 If you’ve ever been to an Odd Future concert you know that the wily group has sparked a sea change in young fashion. Specifically: everyone under the age of 19 dresses like Tyler, the Creator, mucked up in cat tees, tie-dye, shorts, and the ever-present socks (sometimes tube, sometimes graphic patterns), pulled up nigh to the knees. It’s a highly specific look, and it’s Tyler’s through and through — except for maybe Jasper Dolphin, who rocks the same tees-and-knees combo but with the odd basketball short and house shoe thrown in. It’s understandable
that kids wanna rock the styles of their idols, even if they themselves aren’t disaffected California skateboarders hyped on life and ADD — and OF has created an underground teen movement that’s as voraciously worshipped by misfits as fangirls sweat Bieber. And even though Odd Future hawks the illest merch, it was pretty far-fetched that Tyler’s dogtown adolescent style and Jasper’s weed-on-the-couch vibes would trickle up to the runway… right?

Yeah, no. Shaun Samson, a young LA-born/London-based designer who once apprenticed with Jeremy Scott, showed his Spring 2013 line at London’s Fashion East Man show in June and it was ripped almost verbatim from the Tyler/Jasper playbook, give or take a clear tulle cardigan or two. Samson’s T-shirts were especially Tyler, with warped pug-faced kitties who’d had their eyes scratched out, basically identical to half the tops in the Golf Wang shop, and OF’s assortment of cat-predator hybrids. And his sparkly take on the gym slipper could essentially be a bedazzled version of Jasper’s Adidas beach shoes, complete with white sports sock. To be fair, Samson’s drawn from his L.A. upbringing before — previous seasons have reinvented cholo style and borrowed Mexican blanket patterns for the runway — and this season is clearly based on LA’s slovenly beach bums and weed heads. But the Odd Future influence is unmistakable, and at the very least, it goes to show how the ragtag band of friends has impacted beyond music culture. (They did play an Alexander Wang party last fall, after all.)

This is not the first time a designer’s inspiration from a music-muse has gone a bit beyond the pale. Last fall, Jean-Paul Gaultier’s couture show paid homage to Amy Winehouse’s beehive and ‘50s roadhouse steez to criticism from her family, while in 2009, MGMT’s highly stylized, psych Lord of the Flies aesthetic was a direct influence on Gucci’s spring line that year, despite that it had already been designed by an actual designer (Lizzie Owens, proprietor of the covetable Highland). Clearly fashion and music would be lonely without each other, but sometimes “influence” hovers into side-eye territory.