Concert in France starts with a live surprise: "Lucky" 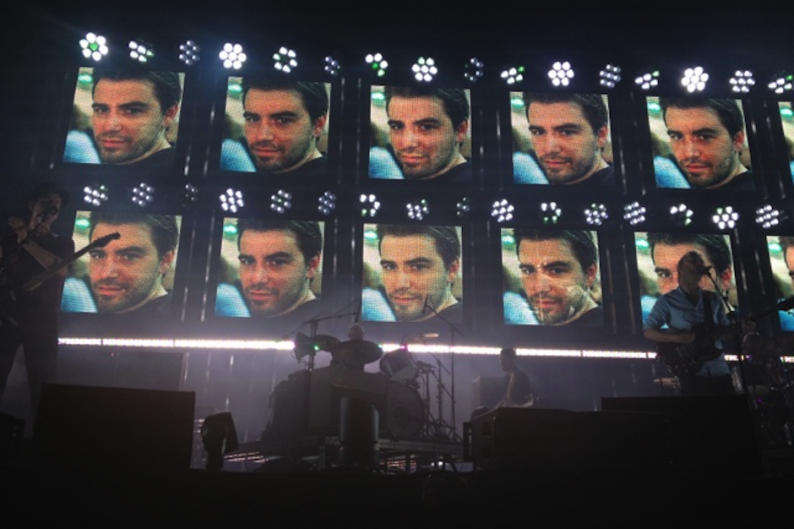 Radiohead returned to the stage tonight in Nimes, France, nearly a month after a horrific stage collapse in Toronto resulted in the death of their drum tech, Scott Johnson. The band postponed the first seven shows of its European leg while dealing with the tragedy but promised to resume their King of Limbs tour at Nimes’ Les Arenes. Having lost much of their stage setup in the Toronto disaster, Radiohead performed with a stripped-down visual display in Nimes. The mobile screens that previously floated above the band were now fastened to the backdrop, and the large LCD that was once affixed to the top of the lighting rig was absent, fansite AtEase reports.

The first clue that this would be a different, emotional Radiohead show came when the band began the concert with the life-affirming OK Computer cut “Lucky” in place of the King of Limbs opener “Bloom,” which served as an intro at every other concert this tour. This marked the first time since 1998 that “Lucky” kicked off a Radiohead show. After that surprise, it was business as usual for Radiohead, as the group launched into a set list similar to the rest of the TKOL shows… until the encore, which featured new track “Full Stop,” the live debut of the Kid A instrumental “Treefingers,” and a now-infrequent performance of In Rainbows’ closer “Videotape.”

Following the second encore, Radiohead supplied another rarity: a third encore, which Yorke dedicated to “our friend Scott.” During the performance of “Reckoner,” photos of Johnson were shown on the eight video screens behind the band. Radiohead’s tour resumes tomorrow night with another concert in Nimes.