A bloody, near fatal turn of inter-band rivalry shut down last night’s celebration of hardcore at the CBGB Festival in New York, when a former member of one of the bands stabbed a current member. Taking place a day after Agnostic Front, Madball, and Murphy’s Law turned Webster Hall into a mosh party that celebrated the legacy of the CBGB hardcore matinee, the second night was supposed to be more of the same. The lineup, headlined by New York hardcore legends Sick of It All, also featured Long Island’s metal-leaning Vision of Disorder and the ever-tumultuous hardcore group the Cro-Mags, who have a strange history of bandmember disputes.

One of those may have come to a head last night, according to Bowery Boogie, when founding Cro-Mags vocalist-bassist Harley Flanagan entered the upstairs VIP section brandishing a knife around 8:30 p.m., shortly before that band was supposed to play. He attacked two or three people, depending on the report, slashing one and biting up to two others (according to WABC and the New York Post). At press time, the victims — one of whom is said to be current Cro-Mags bassist Mike Couls — had been taken to a hospital and are expected to survive.

The metal blog Horns Up Rocks has an anonymous eyewitness account from someone who spoke to Flanagan earlier in the evening. “I talked to him outside minutes before it happened and I knew something was going to go down,” the source said. “He was like a fucking lunatic outside…” 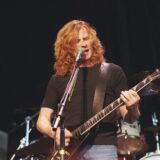 Shortly after the altercation took place, about six members of the venue’s security staff charged Flanagan and subdued him, according to Bowery Boogie. “Blood was everywhere,” the blog reported. “Bone protruded from his shin.” The police arrived, tying Flanagan to a chair, and the rest of the evening’s performances were canceled. The bassist was also taken to the hospital for a broken leg and is being charged on two counts of second-degree assault and a weapons charge, according to Rolling Stone.

Historically, Flanagan has found himself in many Cro-Mags band disputes, the most recent of which occurred with on-again, off-again vocalist John Joseph. The pair got along well enough in the mid-’80s to record the genre touchstone The Age of Quarrel, but they seemed to take turns in the group through the rest of the decade. It broke up in 1993 but Flanagan took the reins for a touring version halfway through the decade. In the ’90s, one member of the Cro-Mags, allegedly in cooperation with Flanagan, turned Joseph into the police for still being AWOL in the Navy. Joseph formed another version of the band, which now has two official websites by former members (Flanagan’s has a “recent” 2002 news item announcing Flanagan would not be touring with Joseph’s “No-Mags”) and a Facebook page for the Joseph version, while Flanagan formed his own band, Harley’s War. While the tensions continued, they seemed to take a breather by 2008 when Flanagan told the Village Voice, “Brothers fight. They’ll always be my brothers,” about his former bandmates. His true motivation for last night’s fight remains unknown at this point.

Organizers of the CBGB Festival released this statement about the altercation:

“We are saddened to learn about the events that occurred last night at Webster Hall. Our primary concern is always the safety and experience of New Yorkers, music fans and the general public. Naturally, we will fully cooperate with law enforcement while hoping for the speedy recovery of those injured.

“Live music can be incredibly uplifting, empowering and positive. We don’t feel the actions of one person should overshadow four amazing days and nights of events that include today’s historic and unprecedented free concerts in Times Square and Central Park.”