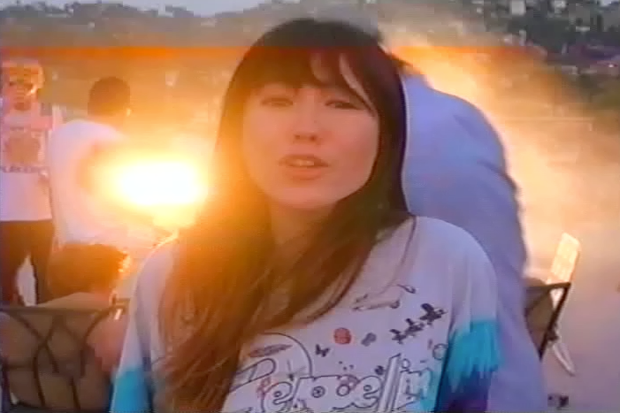 When we first offered up a download of the song “No Waves,” by SoCal garage rockers FIDLAR (whose name, incidentally, stands for “Fuck It Dog, Life’s a Risk”), we praised its lo-fi production. Now, in video form, the band, who is touring with the Hives this month, is wearing that description on their cut-off sleeves. The video pays homage to the VHS era, emanating greasy production values, as it flickers through home-shopping commercials, exercise videos and a talk show before launching into the campy ode to ’90s TV shows and homemade hangout vids. It stars Clouds and Candy fashion blogger Alice Baxley — sister of FIDLAR singer-guitarist Zac Carper and wife of the video’s director Ryan Baxley — dressed in hippie-ish shades and a tie-dyed Led Zep shirt, lip-synching to the song as she trudges along Los Angeles sidewalks. It’s slackerism at its best, especially when she goes into a store and the band jumps out and does some air guitar for a mini solo. It’s got wild party antics, skating, bonfires and sparklers. And whether it’s all just nostalgia or not, it’s a great video to usher in summer.

Check out the video and their tour dates with the Hives:

FIDLAR – “Frances Farmer Will Have Her Revenge on Seattle” (Nirvana Cover)