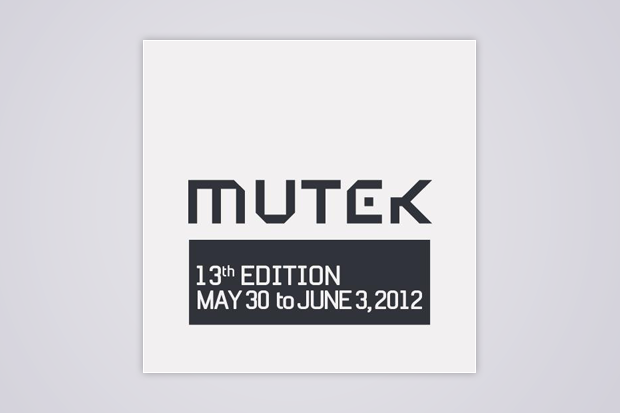 For 12 years, the MUTEK festival has drawn increasing numbers of fans to Montreal at the end of May for five days and nights of some of the most forward-thinking electronic music programming in North America. What began in 2000 as a relatively intimate affair, with 34 artists and crowds numbering in the hundreds, has grown to 150 performers and more than 25,000 paid entries — no small task, when you consider the avant-garde leanings and underground stature of the festival’s typical roster. Rather than the candy-colored strains of rave that currently dominate domestic EDM, MUTEK emphasizes club culture’s fringes, along with noise, improv, experimental computer music, and new media.

This year, MUTEK is attempting to grow its audience exponentially — but without compromising any attendees’ elbow room. That’s thanks to the organization’s Virtual Festival Studio initiative, which aims to broadcast live performances, artist interviews, panel discussions, workshops, and other audiovisual content from the festival to fans around the world. MUTEK’s organizers have launched a Kickstarter campaign in order to fund the effort; they’re currently over 10 percent of the way to their $20,000 goal. (Bandwidth isn’t cheap, and neither are skilled videographers.) If the goal isn’t met, all donations will be returned, making it a no-risk opportunity for far-flung supporters of cutting-edge electronic music.

“The VFS project is a way to add something for everyone,” says festival director Alain Mongeau, stressing the two-fold nature of the endeavor: both to provide virtual access to fans who can’t make it to Montreal in person, and also to archive performances for posterity online, long after the event is over.

“This is made possible by the fact that we’ve spent the past year reinventing our web platform into something with more of a multi-media and editorial approach,” says Dimitri Nasrallah, director of promotions and interactive content. The festival’s website currently features an archive of performances that stretches all the way back to the first edition, including sets by Vladislav Delay, Matmos, Matias Aguayo, Ben Frost, Demdike Stare, and many more. The aim, says Nasrallah, is to highlight “a strain of live electronic music and innovation that’s not EDM and yet not inaccessibly avant-garde, either. We felt there was an under-representation for these types of live performers.”

Merely scanning the program can’t prepare first-timers for the depth of the MUTEK experience, however. Spread out across a handful of venues in a walkable district of Montreal, and with few overlapping events, it’s less hectic than your average big-tent melee, and far more diverse. It’s more intimate, too, with a genuine sense of community among the attendees; most artists stick around for the full five days, and spend most of it mingling in the crowd.

As a nine-time veteran (and, full disclosure, occasional panelist and more occasional DJ), I’ve had some of the peak musical moments of my life at MUTEK; if you can’t make the trip, consider kicking down for the Virtual Festival Studio. Without projects like this, what’s the electronic music community left with? Videos of a girl humping a tree at UMF Miami? Laugh at your own risk.