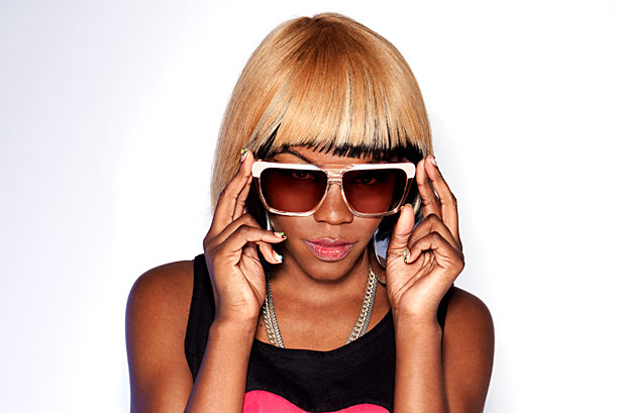 Rye Rye and M.I.A. are together again, this time in a tantalizing taster for the Baltimore rapper’s May 15 debut album on nascent beer-bottle designer Maya Arulpragasam’s N.E.E.T. imprint (via the Hairpin). Rye Rye was last seen in the colorfully creative video for insidiously catchy synth-pop romantic come-on “Boom Boom,” but on scream-stabbed sidewinder “Rock Off Shake Off,” she returns to the rude, raw vitality that first brought her to prominence. It’s a chilly, minimalist nod to B’more club music, with a sinuous synth line and crushing low end.

According to iTunes, where you can pre-order the deluxe edition of Rye Rye’s Go! Pop! Bang! now, “Rock Off Shake Off” is one of four M.I.A.-assisted tracks on the album, including 2010’s “Sunshine.” The album also includes Rye Rye’s recently leaked Tyga collaboration, drum-heavy girls-night-out ode “Shake Twist Drop” — the latest rap song to extend MC Hammer’s amusingly enduring cultural relevance. Happily, the track list also includes not only Rye Rye’s wonderful 2011 Robyn team-up “Never Be Mine,” but a “R3hab Remix Edit” of the track, too.

As you might guess from the above, Go! Pop! Bang! has been gestating a worryingly long time — indeed, “Drop Off Shake Off” first emerged in an M.I.A.-less version a few years ago, with a prominent Daft Punk sample. It would be a horribly bittersweet irony if recent years’ explosion of talented female rappers has made Rye Rye more difficult to market, but it’s easy to see how that could be the case. Not to worry: As Rye Rye keeps throwing ideas at the wall, she has already come up with a few furiously entertaining ones, and it’s only a matter of time before more people catch on. As a place to start, you could do worse than “Rock Off Shake Off,” a bent, melody-defying party banger that arrives with the weekend — and Rye Rye’s album release — almost in reach.