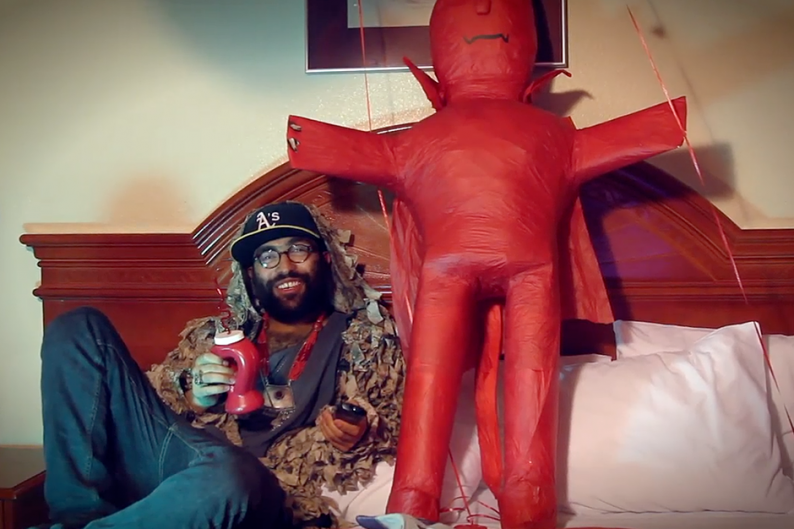 The plan was supposedly for each member of Das Racist to drop a solo mixtape this year, and before we even knew who was going to play in the Super Bowl, two out of three members of the Brooklyn hip-hop trio had done just that. Unfortunately, we’ll have to wait for hypeman Dapwell’s non-D.R. joint, but mellow one Kool A.D. must’ve taken t-t-totally wired colleague Heems’ wisely stupid, seriously funny, personally political triumph Nehru Jackets as a challenge. Where Kool A.D.’s first mixtape of the year, the obliquely hedonistic Palm Wine Drinkard, felt like an elaborate internet joke we weren’t quite in on, his just-released follow-up, 51, follows the boom-bap of Nehru Jackets to its own laid-back, deranged ends.

The first video selection, “La Piñata,” is a good indication of the progression-through-retrogression that Kool A.D. (real name: Victor Vazquez) makes on his second mixtape in less than four months. Produced by longtime friend Amaze 88 and recorded, as with the rest of 51, in Oakland as opposed to DR’s usual NYC, the track is the instantly appealing antithesis of Palm Wine Drinkard’s winking confrontation. Off-kilter psych-rock guitars, intricate jazz drumming, and smoothly bleating saxophone join nostalgic Mr. Rogers’ Neighborhood samples to frame Kool A.D.’s casually insistent, deeply self- and other-referential braggadocio. The picture you get is of a grown-up who exposes the flaw in Rogers’ unconditional love by staying true to his mischievously childish self: “What you wanna do here? Lamp on a couch, smoke weed, drink two beers? / Yeah, me too,” he rhymes slowly, with an audible grin.

That’s also the picture you get from the video itself, which we’re proud to premiere. Directed by Justin Hantz, who does all of the group’s psychotropic live projections, the clip strikes just the right tone of immaturity, world-weariness, and total absurdity. The scene is a party in what looks to be a hotel room, with candles and balloons indicating it’s a 51st birthday, but instead of middle-aged folks we see Kool A.D., a young woman, a chicken, money, and Heems and other DR friends sipping beers. That’s just the way they are, we suppose.

Also listen to “Manny Pacquiao,” another 51 track, which puts an exceptionally limber Kool A.D. flow over a spare, hand-clapping instrumental from Bay Area producer Trackademics. “Take a break,” Kool A.D. decides at one point, before going back to his latest in a series of songs that repeat names for no reason, “Tony Montana”- or “M.C. Hammer”-style. “One million dollars”? Try free: Download the whole mixtape now from MishkaNYC’s website.