You will never truly grasp the majesty of Marissa Paternoster until you look deeply into her eyes as she solos, which, yeah, good luck with that, even under ideal circumstances. There’s her face-obscuring, bang-overhang bowl cut to contend with, for starters (don’t worry, she smiles occasionally, this isn’t a sullen teenager thing), not to mention that she’s, like, 5’1″ maybe, so unless the stage is yea high you can forget about laying eyes on her at all.

This is all worth the effort and frustration, though, because watching Marissa Paternoster solo in person is amazing.

Let’s try it on record first, though, just for fun. The first eruption comes precisely 1:42 into “It All Means Nothing,” the leadoff track on the fifth full-length from New Brunswick, New Jersey’s finest no-collar pop-punk trio, the Screaming Females, ruled by Paternoster with an iron fist and serpentine fingers and a hilariously nonchalant bad attitude. The first minute and 41 seconds are just delightful. The profoundly satisfying unfinished-basement distortion-pedal crunch envelops you immediately. The other two (male, mild-mannered) Females (Jarrett Dougherty on drums, “King Mike” on bass) are nimble and propulsive in time-honored Buzzcocks-on-a-budget fashion. And our guitar heroine’s bemused roar of a singing voice is a hoot, quite literally, with piercing highs and crater-carving lows, Carrie and Corin from Sleater-Kinney fighting for control of the same corporeal being, Halloween with a pinch of Boxing Day, Kristen Wiig impersonating Danzig. Just delightful. 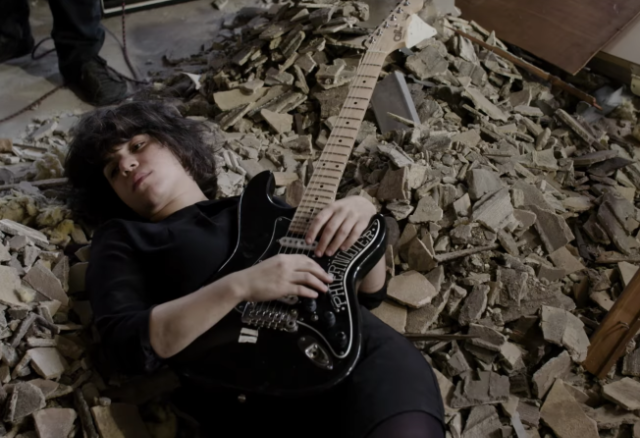 But gahhh, the solo. An abrupt, shocking meteor shower of notes, fleet and fiery, a compressed symphony rife with both technical virtuosity and actual human warmth, a bracing slap in the face so casually badass all you can do is laugh. There is no substitute for witnessing this in person and realizing exactly how casual we’re talking here, beholding the complete lack of affect or emotion displayed on whatever tiny portion of Paternoster’s face is visible as she unleashes that fusillade of hammer-ons and shrieking bends and one-handed show-off theatrics. She acts like she’s brushing her teeth. It’s glorious.

Ugly struggles mightily, as all their records have — as every punk album ever born has — to replicate this feeling, to conjure somehow a live show’s sense of ferocious wonder, which is, of course, very much a visual, and visceral, thing. Particularly in this case: Paternoster is so gargantuan and mesmerizing a presence that she’s a constant threat to subsume the band, the stage, the crowd, the whole club, the whole city block whole. But this album comes the closest the Females ever have to bottling that lightning, mining the same sugar-grunge buzz Yuck so expertly sustains; that their lane is markedly narrow doesn’t downgrade them to being a merely good band, or even an unimaginative one. “Rotten Apple” is a jaunty, hooky thrill for Paternoster’s multiple daffy line-readings of “I’m a rotten appllllle” alone; “Red Hand” is an ominous, exotic, bass-driven minefield, the male Females fiercely asserting themselves; “Doom 84” blooms into an eight-minute sprawler of startling Black Sabbath grandiosity. The death howls that punctuate “Slow Birth” are pretty fantastic; live, she usually delivers them by stuffing the whole mic in her mouth and then spitting it onto the floor, another irreplaceable visual effect, but you’ll get enough of the idea.

Still, verily, the solos are what kill you, be they “Eruption”-style freak-outs or the (only slightly) more controlled chaos of “High,” which melts down ecstatically right after Paternoster howls, “I don’t get high/I can’t unwiiiiiiiind.” This is the climactic moment of the best rock show you’ve seen in years, wherein you feel compelled to grab the dude (just dudes, please) who’s been blocking your view all this time and throw him into a wall. Great song, rousing album, but nonetheless: The Females need a stage to truly shine, and Paternoster needs a bigger one — she’s a one-woman Wild Flag, a fire-breathing guitar heroine every bit as indispensible as ice queen St. Vincent and ADD lightning storm Marnie Stern. (This isn’t the Women Who Shred ghetto, either: We’re talking the best guitarists in indie rock, full stop. All you dudes oughta be ashamed.)

And so, Ugly‘s deep reservoir of deft melodicism is its own reward, and it wryly harnesses the friction between the band’s workmanlike grit and Paternoster’s young-superstar allure, but the friction’s still there. All you can hope for is a wider sense of scale and possibility — more risks, more detours, more gleeful disorientation, a touch of the same absurdly ambitious fervor that elevated fellow Jersey-punk royalty, such as touring-grind-lifer poet laureate Ted Leo and magnificently deranged Civil War re-enactors Titus Andronicus. She could be bigger than all of them. Put simply, this bands needs to put out a record in which Paternoster just rages, formlessly, for 45 minutes. No hooks, no pop concessions, no apologies. Keep your feet in the van, but keep reaching for the stars.