Pleased to Meat Me: ‘Bob’s Burgers’ Creators on Episode 4 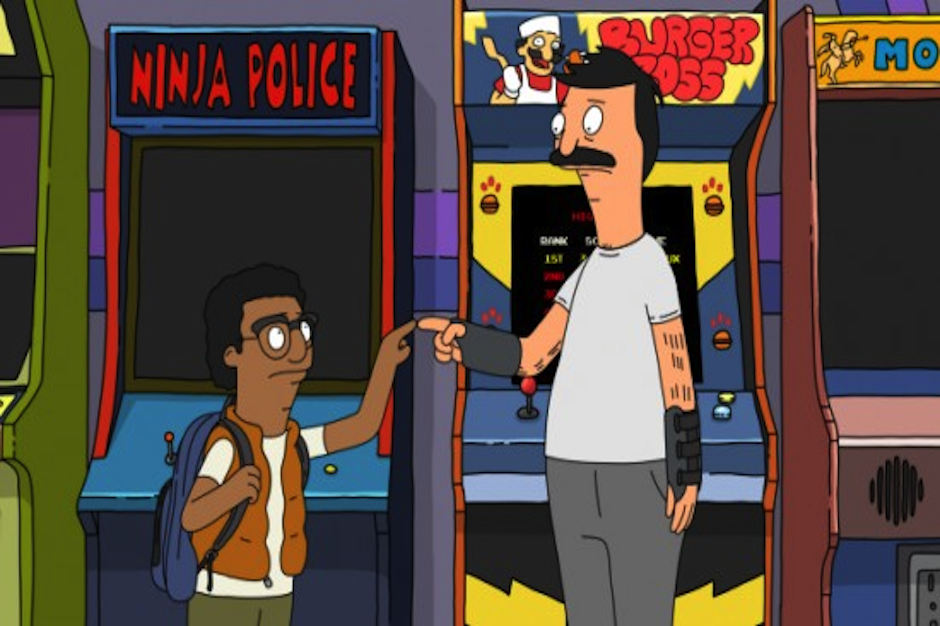 In last night’s very special episode of Bob’s Burgers, Bob Belcher’s dual addictions to painkillers and his obsessive attempt to best Jimmy Pesto’s high score on the restaurant’s vintage Burgerboss arcade game threaten to tear his family apart. Eh, not really. Actually, both the game and the pills seem like a lot of fun, maybe less so carpal tunnel syndrome. Also, Aziz Ansari guest-stars as a nerd (sorry, “video game enthusiast”). The whole thing was written by the show’s story editor, Scott Jacobson (director of recent, awesome videos for Superchunk, the National, Stephen Malkmus, and Nick Lowe), who based the story on his own harrowing childhood. Nah, that’s not remotely true, either. Sorry, with all the Game of Thrones stuff, just seemed like we needed to sexy this up a little. Pay no mind. Arcane inside references, and, probably, spoilers, ahead.

What video games are Bob’s Burgers staffers most addicted to? What pills?
I like the Xbox game BioShock. On a darker note, writer Wendy Molyneux’s addiction to Frogger has endangered her job, her family, and her health. Wendy, I hope you’re reading this. Something’s gotta give.

How did the idea for the episode come about?
I pitched an episode based on King of Kong. And Loren shaped it along with me and the other writers until it turned into the episode you saw last night. True story: At one point in the story’s evolution, it ended with Bob blacking out in the Family Funtime ball pit and waking up to find a Satanic ritual in progress. Then we thought, nah, too hacky, and looked for sneakier ways to pay tribute to our Dark Lord.

Bob’s rivalry with Jimmy Pesto seems like a nod to the Cheers gang’s rivalry with Gary’s Old Town Tavern and Pawnee’s with Eagleton – why is it so funny to have sitcom protagonists kept down by a dickish arch-nemesis?
I think of Jimmy as being in the Biff from Back to the Future mold of arch-nemeses: totally ridiculous and yet somehow still menacing. Maybe these kinds of conflicts between sitcom characters point to the absurdity of our own petty day-to-day rivalries. Or maybe it’s just a lazy way for writers to stir up story-driving conflict. Either way, I forget your original question.

We’ve seen you around these parts over the past couple years as the director of music videos we love — how did you wind up on the show?
When I flew out to L.A. for the interview, all I knew is that Jim Dauterive was the executive producer, and that he was from King of the Hill, one of my all-time favorite shows. When Jim told me Loren was the creator (Home Movies and Dr. Katz are also personal mega-faves), and Kristen Schaal, Jon Benamin, Eugene Mirman, John Roberts and Dan Mintz were in the cast, I sincerely wanted the job more than I’ve wanted any job in my life. So I begged and threatened Jim until he hired me.

If you had the money: Sailing lessons or Fart Island?
Gift cards. They’re as good as cash.

Do you worry that your important, timely anti-bullying message about having pill-popping adults make nerds kiss their tormentors is in danger of being overshadowed by a bunch of jokes?
In all seriousness, I think the “put your smiles together” conflict resolution technique should be in wider use by educators. But then, that’s why I’m not allowed near playgrounds.

Should there be a service that rents out orphans to adults who just want to play vintage arcade games on their own time?
Orphans? Are you implying Darryl is an orphan? Or did you just see that movie Orphan and now you’ve got orphans on the brain? Whatever it is, I want nothing to do with your orphan-positive agenda.

How did Aziz Ansari wind up voicing Darryl?
We just lucked out. We heard through the casting grapevine that Aziz would be up for doing a voice on the show. And he happened to have the perfect swagger mixed with vulnerability that we needed for Darryl. He’ll be coming back in future episodes.

It seems like all the episodes this year have some sort of unexpected musical interlude; who wrote the montage song? Is this just a craven grab for the Glee audience?
The montage music was written by our incredibly talented music guy John Dylan Keith, with lyrics by me, Steven Davis, Rich Rinaldi and Loren. We love writing songs and yes, we wanna make a play for that sweet, sweet Glee cash.

Would you ever wear a wrist-corset if you thought your forearms were looking too pudgy?
No danger of that. I have Bradford Cox forearms. (Hipster music reference! G’night, SPIN!)