On March 5, a post on the official website of Ronnie Montrose announced that the former Montrose frontman had died at age 64 following a five-year battle with prostate cancer. Yesterday, however, the San Mateo County Coroner revealed its autopsy findings. According to the heartbreaking report, Montrose’s cause of death was actually a self-inflicted gunshot wound.

Since the report, which also noted that Montrose’s blood alcohol content was .31, was made public, Montrose’s family, who did not contradict reports at the time of his death that stated the guitarist had died of complications from the cancer, has posted a new statement on his official website, apologizing for the deception and encouraging fans to honor his memory:

By now, the devastating truth of Ronnie’s death is public knowledge. We hope you can understand why we wanted to keep this news a private family matter for as long as possible. We can only hope that you will choose to celebrate Ronnie’s life, and what his music meant to you, rather than mourn his passing. Ronnie would have wanted it that way. He loved being a guitarist, a composer, a producer, and a creator of magic. He fully understood his gifts, and yet he constantly pushed himself to evolve, improve, and make better music. He did this for himself, and he did this for you, because he adored and appreciated his fans. Please keep his energy, his joy, and his love in your hearts.

Please note that there will be no more statements from the Montrose family at this time. We ask that you respect the family’s privacy. 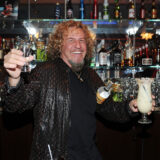 The 5 Best Sammy Hagar Moments to Pair With Santo Cocktails

“He never thought he was good enough,” Leighsa Montrose, the guitarist’s widow, told Guitar Player, adding that her husband did not leave a suicide note. “He always feared he’d be exposed as a fraud. So he was exacting in his self criticism, and the expectations he put upon himself were tremendous. Now I see that perhaps he didn’t want to carry these burdens for very much longer.”

The original statement on Montrose’s official site stated that, “True to form, he chose his own exit the way he chose his own life. We miss him already, but we’re glad to have shared with him while we could.”

Montrose got his first big break in 1971 as a recording guitarist on Van Morrison’s Tupelo Honey, but his most well-known work was in his early 1970s band, Montrose, whose first two albums (Montrose and Paper Money) featured Sammy Hagar as frontman. He continued playing throughout the late 70s until his death March 3, recording nine solo albums, six Montrose albums, and appearing as a guest instrumentalist on many more.