James Mercer & co. played 'Simple Song' and 'It's Only Life' 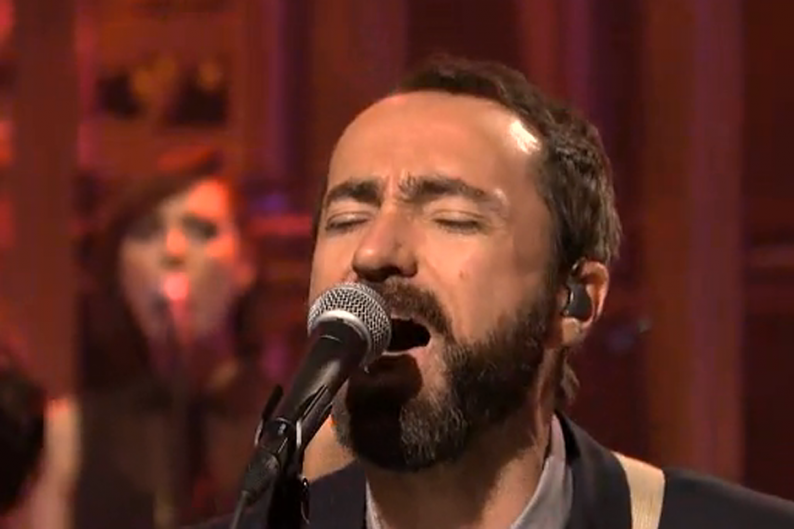 The Shins gave a sharp performance as this weekend’s Saturday Night Live musical guests, but theirs wasn’t the song audience members were probably humming at the end of the show.

James Mercer’s new lineup for the now Portland-based sophisti-poppers took the SNL stage as a seven-piece, including a couple of backup singers. They performed the wistfully romantic, uptempo “Simple Song” and the more restrained, gently motivational anthem “It’s Only Life,” both from Mercer’s first album under the Shins name in five years, Port of Morrow (due out March 20). As seen in the band’s New York show earlier in the week, Mercer and Co. were a well-oiled machine, expertly navigating the melodic twists and turns of songs that function like a more adult version of the Shins’ Chutes Too Narrow-era richness. The renditions were subtle and subdued, and the road metaphor at the center of “It’s Only Life” was already the subject of a single Mercer put out in late 2009 as Broken Bells (“The High Road”), but on the whole the appearance was hard to fault.

That said, beating SNL’s legendarily awful sound is no guarantee you’ll steal the show. The episode ended with a sadly not-officially online sketch involving host Jonah Hill and Kristen Wiig as a couple whose anniversary celebration involves singing Coolio’s hilariously self-serious, “Canon in D”-lifting 1997 hit “C U When U Get There.” Though Coolio’s best-known song, “Gangsta’s Paradise,” questions whether he’ll “live another 24,” the sketch predicted the rapper will survive well into the next millennium. Hill and the SNL cast danced into their audience during a cover of the tune. As Mercer sang earlier in the night, “Well, this is just a simple song.”