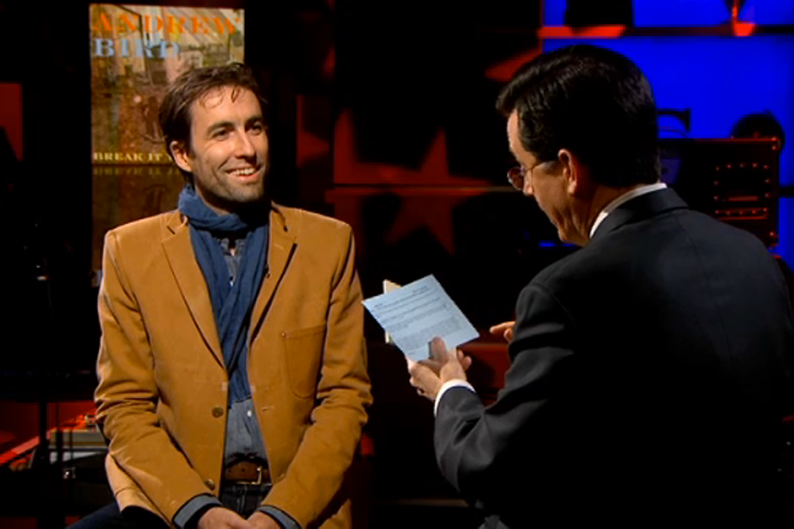 The entire music industry is drunk in Austin right now, but leave it to Andrew Bird and Stephen Colbert to give them something non-SXSW to talk about.

The Chicago-based multi-instrumentalist and singer-songwriter released his holy-shit 12th album, Break It Yourself, only last week, and his performances from that album last night for Colbert were predictably lovely and unclassifiable. During The Colbert Report’s TV broadcast, Bird switched off between violin, guitar, and glockenspiel for advance MP3 “Eyoneye,” a rousing number that brings the album’s title phrase home. As a web exclusive, Bird and his band delivered an equally tight take on the more subdued, tropical-flavored “Danse Caribe.” Both songs displayed Bird’s considerable whistling talents.

Of course, Colbert being Colbert, his interview with the scarf- and blazer-wearing Bird was as much of an event as the music itself. After comparing Bird to a rag soaked in gasoline and vowing to set him aflame with celebrity, the host asked him about “Eyoneye” and the difference between playing at Renaissance festivals and funerals. Colbert also revealed that one Report writer hypothetically can’t stop associating Bird’s 2005 opus Andrew Bird & the Mysterious Production of Eggs with a long-lost crush with whom the writer made out while the two were dressed, respectively, as a gay Abraham Lincoln and Raggedy Ann. Bird’s suggested cure: Listen to Tina Turner’s “Private Dancer.”

And for fans of inside baseball: at the outset of last night’s episode, Colbert name-checked the EMP Pop Conference, which he said had rejected his scholarly paper on “Self-Love in an Elevator: Appolonian Images of Hedonism, Eroticism, and the Mechanized Urban Landscape in Post-Comeback Aerosmith.” (Apparently his “ontology was false” and conference organizers “couldn’t hear a single.”) Watch Bird’s on-air performance, interview, and Web exclusive below, and check out the full episode here.