Pleased to Meat Me: ‘Bob’s Burgers’ Creators on Episode 3 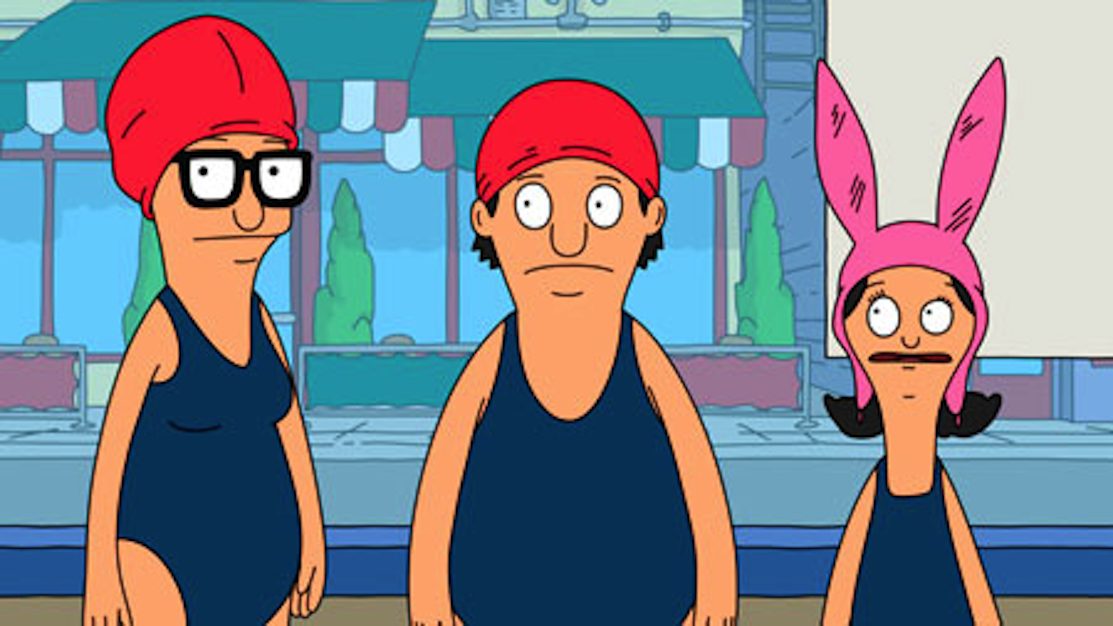 While the rest of the Internet parses the translation of “Zoo Bisou Bisou,” let’s save some space for for last night’s most pressing prime-time familial issue: How nothing brings together a disparate trio of eccentric siblings like a chance to get out of gym class. The third episode of Bob’s Burgers’ second season tackles this topic, hot as the bowl of Teddy’s melted soft-serve, and the episode’s writer, Holly Schlesinger, tells you everything you need to know and plenty you don’t.

What was the origin of this episode?
My original pitch was about Linda substitute teaching at the kids’ school. But they’re in difference grades and don’t have classes together. It seemed like more fun to have the kids and Linda all together. So we talked about ways to do that and came up with independent study. I sparked to that idea because in high school, I did an independent study in tap dancing to get out of P.E. That sounds like a joke but it isn’t. And yes, I did make it to the advanced-beginner level. Thank you for asking.

How many times did the SNL synchronized swimming sketch with Christopher Guest and Harry Shearer come up during the making of this episode? Is it possible to even see the term synchronized swimming without thinking of that?
We talked about the SNL sketch and how hilarious it was but didn’t reference it in this episode. Because why mess with a good thing? That and NBC shut it down on youtube so you can’t watch it anymore. In fact, they probably know we’re talking about it right now. This never happened.

What is it about the sport that’s inherently funny?
You know, at first I thought it was funny. But then I watched a ton of synchronized swimming videos and realized those girls are really strong and could kick my ass. So, no, it’s not funny. It’s a serious sport. (But scissor kicks are kinda hilarious, right?)

The soft-serve machine seems like a real game-changer: How will this change the characters’ goals and stakes as the series unfolds?
Do you remember when Janice Soprano arrived in Season 2 of The Sopranos? It’s gonna be like that. But the ice cream machine’s sexual fantasies will be less disturbing.

What was your worst experience with gym class?
In high school, my P.E. teacher Mr. Debone asked if I had a depth perception problem because I was so bad at sports. At the time, I told him I didn’t think so. I’d like to take this opportunity to tell Mr. Debone that I definitely do not. And I’d like to remind him again that his name is Debone.

Did the development of this episode ever entail a room full of comedy writers trading embarrassing PE stories? Who had the worst?
Yes, it did! But I’m blanking on who had the worst P.E. story. We usually share personal anecdotes during the story-breaking process for all the shows. Steven Davis had a mortifying middle school dance story involving both him and his date crying. I think that might have been the worst/best one.

Is it liberating working on a show where there doesn’t have to be any continuing storyline to worry about?
It’s true, there isn’t an overarching story that we need to service every episode. Except for Janice Soprano Ice Cream Machine. I like telling a complete story from start to finish. Though I will say, it works better on TV than when you tell people from start to finish about your trip to the store to buy vitamins. For some reason I don’t understand, no one wants to hear about that.