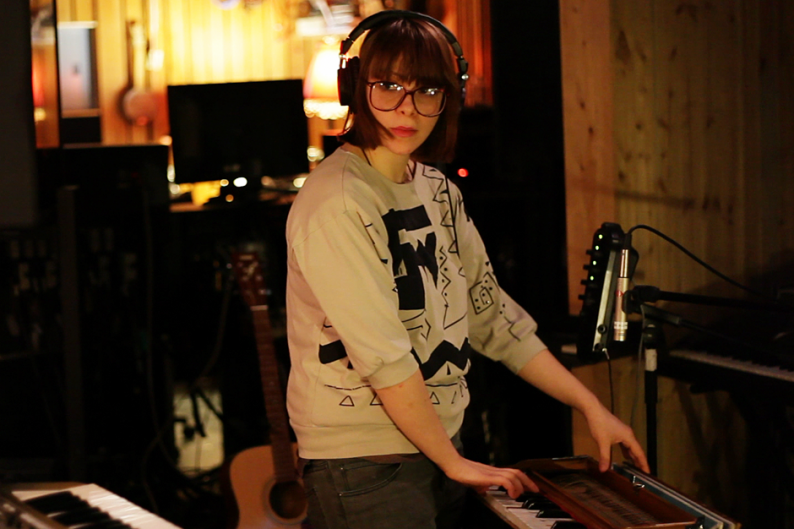 Doris Cellar is unintentionally dusting the zither. Freelance Whales frontman Judah Dadone, her bandmate, had been plucking the massive string instrument a few moment earlier behind a glass door while the rest of the band listened in a control room nearby, producer Shane Stoneback (Vampire Weekend, Sleigh Bells, Fucked Up) laying its exotic plinks over bouncy synth, banjo twang and soft, almost inaudible vocals. “I wonder what it sounds like when you hit it,” Cellar muses suddenly, to no one in particular, before picking up a stray lint roller and taking Dadone’s spot. A gentle, shimmering sound emerges as she taps it, but the roller clings to the strings. “I’m cleaning it,” she laughs. Dadone spins around: “Thanks! It’s been in my bedroom getting dusty.”

The New York indie-pop crew’s recording session for the follow-up to their 2009 splash, Weathervanes, has been characterized by impromptu experiments and an arsenal of unconventional instruments. “When you get your hands on a new instrument you’re going to do something you wouldn’t have otherwise done,” Dadone says. “When you don’t understand the theory of it, you’re totally blown away. To sit down with an instrument you’re unfamiliar with and play something remedial that sounds nice to you, that’s the closest thing you’ll ever feel to magic.” The five multi-instrumentalists recently hauled the zither, a tenor ukulele and an impressive pile of guitars and synths (the search for a horn section is still underway) from producer Stoneback’s Treefort Recording space, located near the Manhattan Bridge in Brooklyn, to his SMT Studios in Chelsea, where they’ll continue to toil away on 18 songs before paring down the final track list. (They haven’t settled on a release date yet.)

The Dumbo studio was dodgy, but sprawling, allowing the band to record clusters of instruments at the same time and whip through tracks at a frenetic pace. “I went through post-partum in the second week,” Cellar admits. “I was freaking out a little bit because everything was moving so fast. It was a song a day. I wasn’t used to it.” Stoneback adds, “We didn’t ever go back and listen to them for any reason, just to keep the momentum going forward.”

They took the opposite approach while penning new songs Dadone describes as “aggressive, with a bit more velocity” in a secluded, rented house upstate last May and June, immediately after wrapping up a tour with U.K. indie-rock deconstructionists Foals. While the band questions their decision to launch into songwriting after exhausting months on the road, the timing turned out to be fortunate. Shortly after Hurricane Irene hit last August, two dumps trucks overloaded with debris slammed into the house while navigating a steep road. “They were coming from the same direction,” says guitarist Kevin Read. “It demolished the library. If we would’ve been there we would’ve been squashed.”

While it was still intact, the summer home was haven where the group wound up going for long walks, cooking, and sipping tea on the now-demolished front porch. “We were playing music everyday, but it was almost kind of to zero ourselves emotionally,” Dadone says. “Getting that machinery moving again takes a lot of effort.” In this case, it also took a lot of nerdy, obscure sci-fi TV. While the band’s debut LP was strung together by a loose narrative starring a comely, young female apparition, the new effort will feature inspiration from life on other planets. Ancient Aliens, Carl Sagan’s Cosmos and Battlestar Galactica were all on heavy rotation in the house, though Dadone is reluctant to reveal too much about their influence.

“I can say a big inspiration has been pseudo-sciences and antiquated forms of thinking and also a little bit of conspiracy theory,” he says. “I think every album ever made is a concept record. I take on the responsibility of trying to create the framework to make sure the songs have something in common with each other, that they reflect one another in a way that helps you understand them. But I think the worst thing you can do if you’re trying to make a record is tell people what to think about it.”